I had a new gym created yesterday, after months of consideration. I immediately realized the candidate I went with (and called in reinforcements to vote on) was a mistake. It's in a new city CBD construction zone that will be barely useful for years, but I was trying to think long-term. The local community is almost dead now. If I'd put the gym at the currently attractive and growing central shopping plaza, at a point with high novelty, it would have been somewhere people are far more interested in going, and pushed the mall up to a relevant amount of gyms to actually get people's attention, along with ~14 new stops I've made there.

As it was, I've made a bad mistake for my community.

There was a park where I populated several POIs. The one which I wanted to be the gym (a large skating ring near the entrance) was accepted last. Instead the gym ended up at a dark and creepy far corner of the park where people have to cross a little bridge over a drain. Nobody wants to go back there, they have said. The skate park would have been very accessible to the community. But there was no way to change it after the mistake was made, and the community is permanently put off.

There is a church which is a valid candidate, however it shares an entrance with a school which has a private property no entry sign on the street, which can be accessed by church goers on weekends of course, and the only other pedestrian path is through a retirement village which is also marked as private property no entry. It has a huge number of photos and photo likes on it. Even if I got another candidate accepted in the L14 S2 cell which it currently occupies alone, it's very unlikely I could get enough Ingress players to like the new candidate in time, presuming it even goes live early enough before the cutoff and I'm free / in the area. It would create a permanent problematic gym if that church converted. Meanwhile if I were to get another candidate accepted, it would likely be in either a big accessible stripmall or a park, a far superior option.

There is a portal/gym on a large bridge here. It is valid, the bridge has a good footpath and interesting artistic lights. The bridge is also many minutes' walk along busy motorways from where anybody could park their cars, and essentially unviewable from anybody's houses. Meanwhile, down the road, there is an enormous picturesque gymnasium with a big parking lot and tons of walking accessibility. Probably the most major raid organizer in our area used to go there regularly for family reasons, until he quit out of frustration with the state of the game. 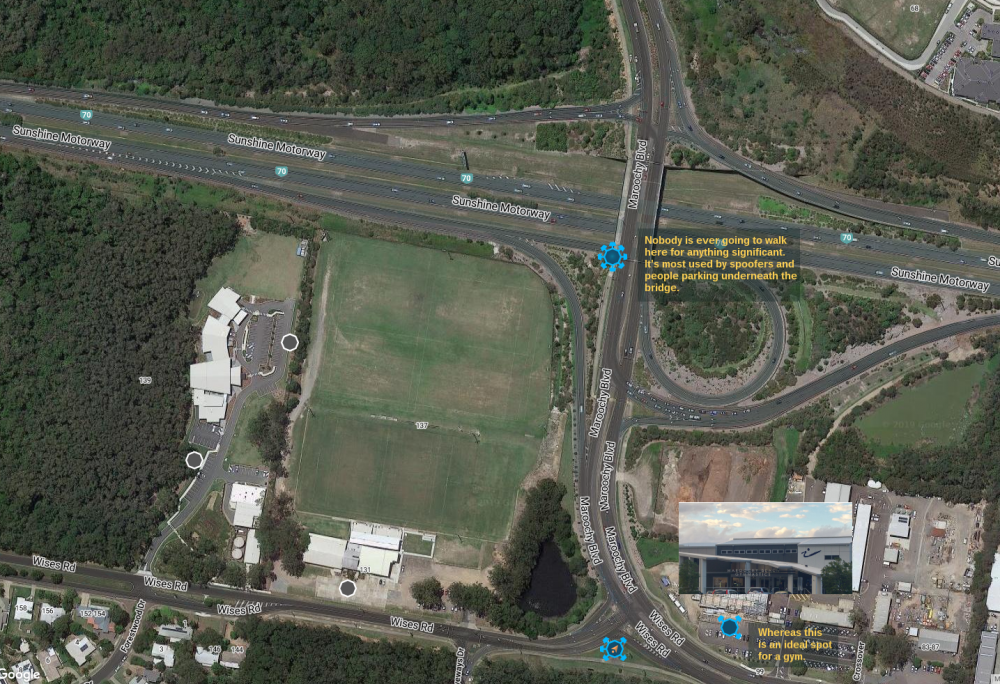 I think at this point we need a way to locally designate gyms, and locally re-designate them. It could take a critical mass scaled for the local community. It could be something on review waiting for disagreements for a month before it goes live. Players could get a notification that a local gym in their area is up for review and they can login to Wayfarer to cast their vote. The old gym could revert to a stop - perhaps the badge information can be internally saved in case it ever becomes flipped again - and the community gets to designate where actually works for gym purposes. All accepted POIs should be valid, however not all are equally ideal as gyms, and there needs to be a smarter, more involved process for communities to survive bad gyms. It doesn't need to be fancy, just a nomination for a gym candidate swap, perhaps it takes 5 other players making the nomination, and then it goes on review for a month with an opportunity for anybody to cast agreements or disagreements, with a notification pushed to any players in the area.