The art of cross-links

The plan was to create worlds first 6-layer homogeneous field by using cross-links, and to spoil you already we managed to do it eventually and it only took 7 minutes even while it was snowing!

First all the eye-candy, text continues after the images. 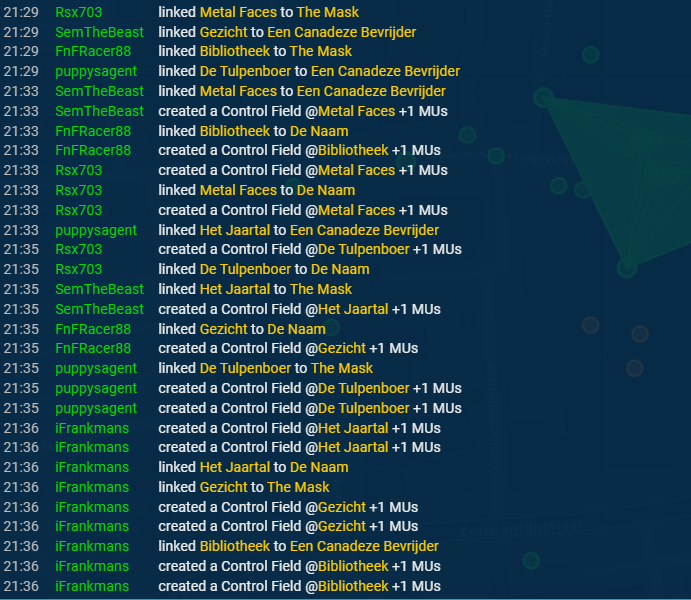 So how did we do it!? First let me share the concept as shown in figure below. The trick is to choose portals in an optimal line-up as you can see I marked three sets of 4 cross-links with different colors (blue, red and orange). If placement of portals is not in such a configuration it becomes increasingly more difficult to achieve a HCF6 with just 8 portals, as you will need more cross-links than in this configuration. In this setup you need to get the outer layer first (in green), than start off with any of the sets of cross-links, and when those are all successful you can finally link the green cross-links to end up with a homogeneous field. This is homogeneous fielding in its purest form as essentially this is just 5 sets of two layer homogeneous fields, but by their placement it results in a 6-layer homogeneous field. 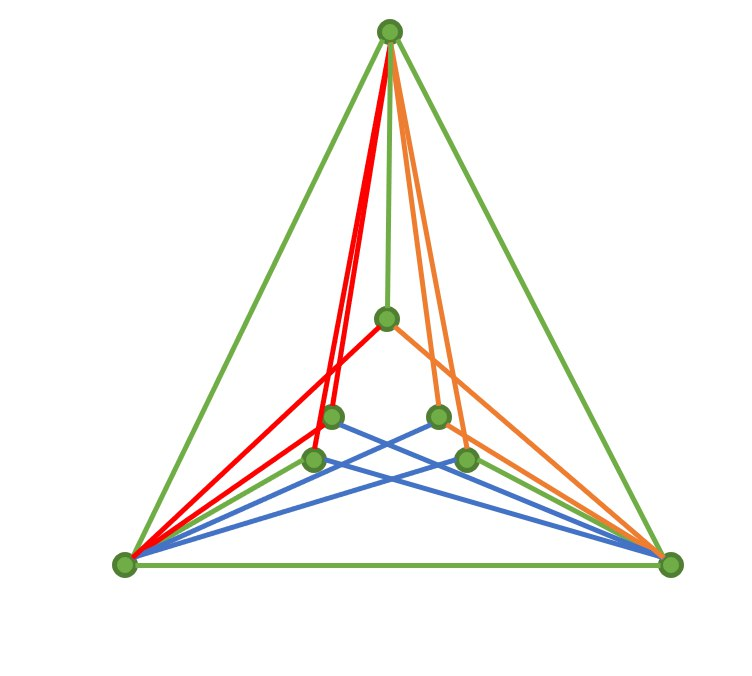 We managed to finish it during the Comic Sans event which allows for linking under a field, although this was not necessary for this piece of art, as it could have all been done by linking from the outside in. It did make this achievement a lot easier to accomplish, as we could stand close to each other. All five portals in the middle were reachable by standing in the middle of the cluster. In this way, the linking could be coordinated without any delays of electronical communication or syncing of clocks. We stood in a circle, I counted down 3-2-1-link, and when I said link everyone would press the link button in the scanner and hope for the best. We made sure that all the linking agents only had keys available of their assigned portal and therefore could not link to the wrong portal. In this attempt we got all 3 sets of 4 cross-links on the first attempt and therefore finished the HCF within 7 minutes (probably a world record!). This method also allowed for a very small area for an HCF6, probably also a world record. But most importantly, this has never been achieved before in the scanner.

This was all not possible before it failed a couple of times, here are some highlights:

The first plan was to do this setup: 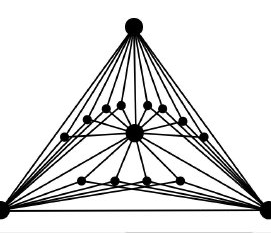 But as you might see already, this requires way more cross-links, namely 3 sets of 6 cross-links, which is harder to coordinate and has a lower success rate, we started with the first attempt on 18th of October 2020 (yes exactly the weekend where the scanner was insanely slow because of the world record linkstar). We managed to cross 5 links two times though: 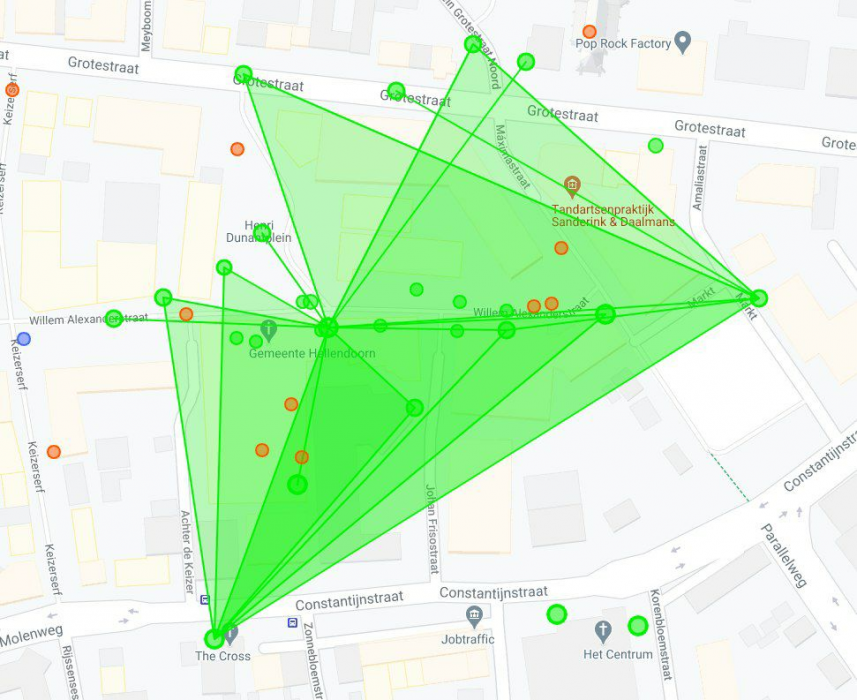 But this clearly was gonna be a very big challenge by communicating over Zello and coordinating link timing with an atomic clock and have link callers at each portal that is linked from. So the next idea was to have two people try the same link, so we needed 12 people to link and 2 link callers. Because of COVID and life we only managed to try again on 7th of May 2021, and guess what... RES decided to do a BAF, and we had to cancel and destroy that field + block.

But one week later, the 14th of may 2021, we managed to get all together and have another try at this crazy idea. This turned out to be even harder, so having two persons try the same link was not the solution as only one has to be early and it all fails. 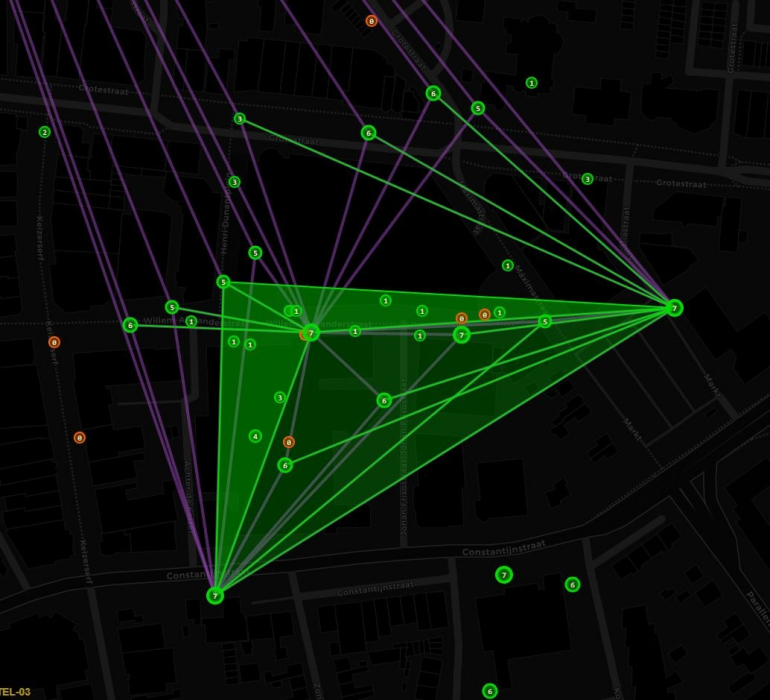 Then I got some inspiration from @Lcfp and came up with the design as shown above, requiring 'only' 4 cross-links at a time. The perfectionist that I am, I was puzzling and puzzling, to try and find a configuration that would also result in a pure HCF (no unused portals). For that to work I needed 1 portal moved and then this was possible, for some reason the community rejected this location edit again and again. In the end, it was decided to just go ahead with an unpure variant.

The first try with this design was on 19th of February 2022. We almost made it, after successfully getting two of the three sets of cross-links (even though one of the outer portals is hard to reach from outside of the building). A new agent joined the fun, but we forgot to communicate properly and we ended with an early link as it was thrown at 3 instead of at 3-2-1-link. But this boosted morale and showed that we could make it. And the Comic Sans Challenge was the perfect opportunity as this allowed all of the linkers to be situated close to each other. 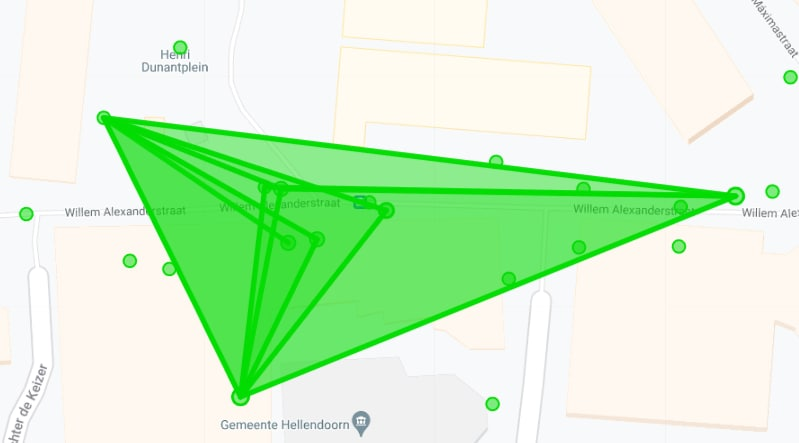