[HK] You may be kidding: allowing many times jogging two points in 1-2 mins and >100kmh speed!

Before I write this report, there had been several other reports posted in this community forum, mentioning reports from highly susceptible or even obvious spoofers that jumping from one location to another remote location in a speed of over 100km/h in a very short period of time (for example, https://community.ingress.com/en/discussion/14309/you-might-be-kidding-again-sos-founder-acc-flew-140km-40min-defying-the-terrain-but-you-did-nothing ). Even I could see there were reports, enclosing Google Map calculations of possible fastest route, ended up with template / canned replies but no further action was understood to be taken on these players, and eventually, closed.

Despite of several reports to Niantic Helpdesk by several allied RES agents, including me, to file complaints of an Agent, which he performed actions jumping from point A to point B and then back to point A within very short period of time (say 1-2 minutes), with two locations several (or even >20) kilometers away, no apparent actions were taken by Niantic for enforcement and maintaining the fairness of gameplay. All to the end were closed by your Lambert after standard replies.

The ENL agent, NewportPlace, had two logs within a very short period of time on 2 May 2020 GMT+8:

By following the direction shown in Google Maps (https://goo.gl/maps/zsVqPF8Gw7n9bPXh8), the pathway from (22.280916,114.172938) to (22.442869,114.030593) requires around 30 minutes by car. Meanwhile, the agent, NewportPlace, only spent 2 minutes travelling between the two locations, which is certainly impossible. It was suspected that the agent, NewportPlace, is falsifying geolocations of either or both mobile phones in order to perform actions at two different places of around 20km in distance within 2 minutes.

When asked by another RES agent in COMM, NewportPlace admitted that he had performed “locking GPS signals” in order to access two locations in a same time. Falsifying locations would be a violation in your TOS, to the best of my knowledge.

May I request your full investigation. Your reply in detail for the investigation (not generic or canned replies), would be appreciated in taking necessary enforcement actions for this agent.

I have also submitted a fast-track ticket under the reference # 13230098, but it seemed all these efforts were in vain.

Tonight, the Agent NewportPlace again performed actions with impossible travelling time within a short period of two minutes, acrossing the harbour. One example could be this, on 11 May 2021 at around 20:03-20:05 GMT+8:

It was impossible to go within 2 minutes from portal “North Point Alliance Church” to portal “余仁生石柱 Eu Yan Sang Pillar” either by driving (16 minutes, https://goo.gl/maps/PFGUXdW6vNiJeev96) or by taking MTR (14 minutes, http://www.mtr.com.hk/en/customer/jp/index.php?oLabel=Fortress%20Hill&oType=HRStation&oValue=30&dLabel=Tsim%20Sha%20Tsui&dType=HRStation&dValue=3).

I wonder if your staff, Lambert, had taken any actions against this ENL Agent for performing such “jumping actions” for so many times, despite of numerous complaints filed to Niantic, or different interventions by allied RES Agents against ENL Agent NewportPlace. Every time when an allied RES Agent asked NewportPlace for the impossible travelling time, NewportPlace usually answered in COMM and said that he “locked GPS signals” with two different phones, which could be falsifying locations and violating TOS. Attached below is an example which the Agent NewportPlace claimed that he "locked GPS signal" for his phones: 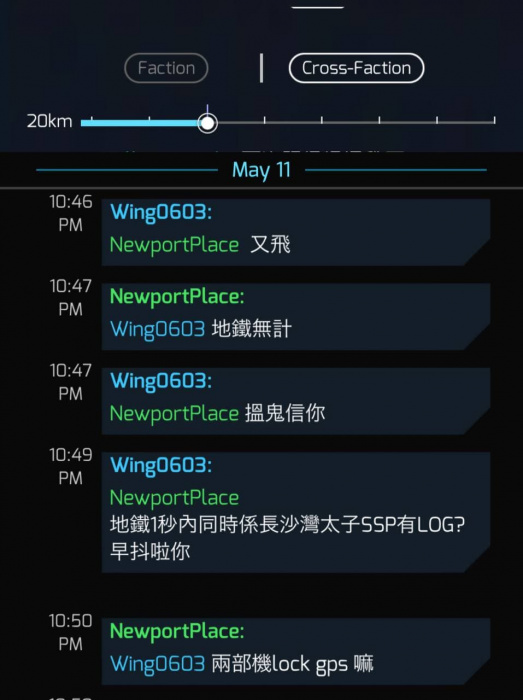 Allowing such actions by this Agent - and your game servers - had been seriously impacting gameplay experience, and I had even heard about some allied Agents expressed their objection by saying that they would quit the C.O.R.E. program until Niantic had taken apparent and reasonable actions to these Agents.

I also wonder why my complaints (and possibly, other reports and complaints by allied RES Agents), had been closed in anyway. Kindly clarify me if the situation were wrong.

I earnestly invite @NianticKK, @NianticCasey, @halette or other appropriate persons to look into the case and provide us an appropriate reply.

Thank you for your attention and time for reading.