The beginning of the craziness

Less than two years ago I heard many times the words "homogeneous fields", I was curious, of course, so Chachel28 sent me some videos about them, and of course, I forgot to watch them. Some months after, I spent one month in the middle of nowhere sharing my nights with an extremely humid hot weather and a weak internet connection, perfect time to watch some of my "To Do List" videos. That's the way Michael Hartley (aka, agent 57Cell) opened a huge window of fresh air, and I felt in love with homogeneous fields, not only because of the concept, also (or maybe more) because the maths behind them were a dream becoming true for a mathematician like me. Since then, from time to time, I had a telegram message saying, "How is the homogeneous going!?", I'm sure that Papaveris' insistence was one of the reasons why I started this craziness.

The planning: when a global pandemic gives you a lot of time to stay at home...

Homogeneous fields were on my mind for a long time, indeed, I thought about the possibility of doing one for the Didact Field Challenge, crazy, I know, it's better to make fan-fields, so I changed my mind... After that, covid heavily hit Spain, we were under a very strict lockdown (#stayathome time), playing active ingress was not an option. It was time to have fun with Tesserae and to draw future OPs, thinking and dreaming about the time we can enjoy the freedom of being out. Many projects came and a lot of plans were thrown into the future ideas. In November, I convinced three of my ingress friends to make an HCF5 (they were easy to convince), together with krase73, sp3ck4 and BirTawil we made an HCF5 in about 2 hours and a bit (20 minutes more to farm the keys). This was a good test to check the viability of making an HCF6. 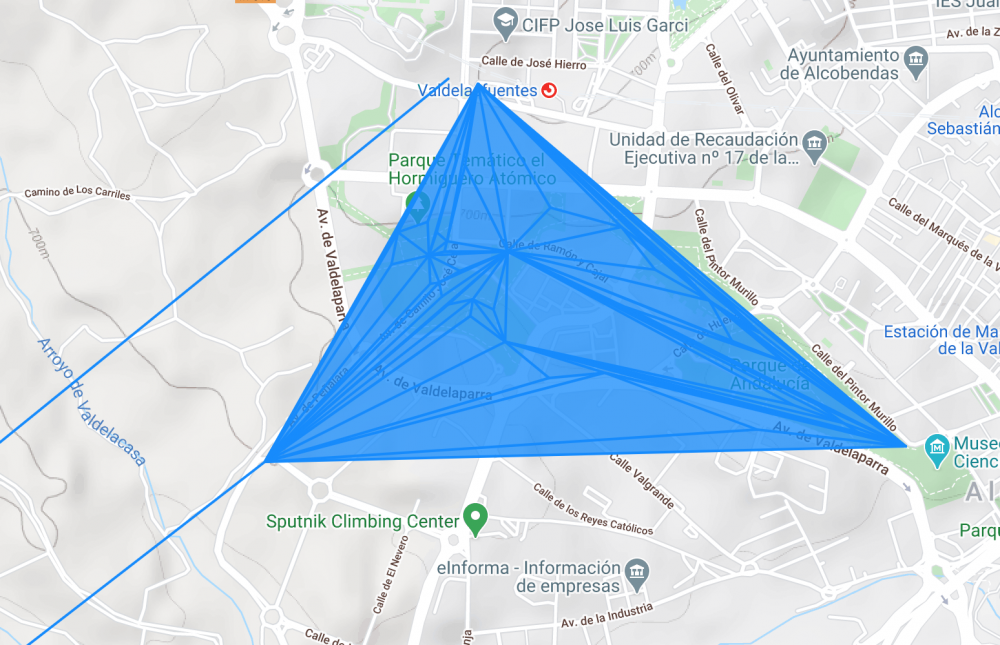 The pandemic evolved, Fall and Winter were the seasons of "cierre perimetral" and curfew (“perimetral closure”, some areas had a restriction of movement, and we were not allowed to go outside our area except to work, people from outside were also not allowed to enter these areas). Alcobendas was under these restrictions for some months. So, more time to be at home, more time in front of a computer... This gave me an idea: an HCF6 completely inside Alcobendas, my AlcoH6, we were not able to cross some streets to enter the adjacent city, San Sebastián de los Reyes (shortened by Sanse), in some way, we share the space, but we were not able to move freely from one to the other. This was an extra challenging condition I loved to have; I had some sketches of HCF6 from before, but all of them included portals in Sanse. I made one plan, two plans, three plans... I needed to create alternatives to adapt the extension of the big field to the map (some necessary blockers for the cell game changed my drawings two times). When I was convinced that all the portals were accessible and that I could make a reasonable route (most of it on foot) that was feasible during the non-curfew window, I started the farming of the keys and the planning of the best linking order.

The keys: when your inventory comes crazy

For the shape of the field and the future design of the route, it was easier for me to try to make the solo HCF6 using the baseline method. Farming the keys took me a couple of days: the first day about 2-3 hours to collect all the keys for one of the anchors, the center, and some close by "semi-centers"; and another day about 3 extra hours farming the "semi-centers" and "semi-semi-centers" (every portal for which I needed 7 or more keys). The other anchor was near my place, so I was able to hack it every day several times in my way to work.

At the same time the collection of keys in my inventory was growing (and the number of xmps was decreasing and decreasing), I started planning the best route to cover all these links in a more or less reasonable way. I wanted to use the car as less as I could. I spent some nights (until late, well, some people will say that it was early in the morning) planning the linking order and writing down the keys I still had to farm during the building.

First attempt: one HCF5, two HCF4 and some others HCF3

Finally, everything was set up to try to do it! During Eastern break, I decided that March 30th was the perfect day to try it. The night before, krase73 captured the right anchor (Grafiti Bailarina) and deployed the 2 SBUL that I needed to finish the job. I started at 8:30 am, the day was sunny, and the temperature was warm: perfect day to play Ingress. Everything was going well when an unscheduled work meeting knocked on my door, I finished the first HCF5 around 11-11:30 and ran home for my never-ending 3 hours zoom meeting. 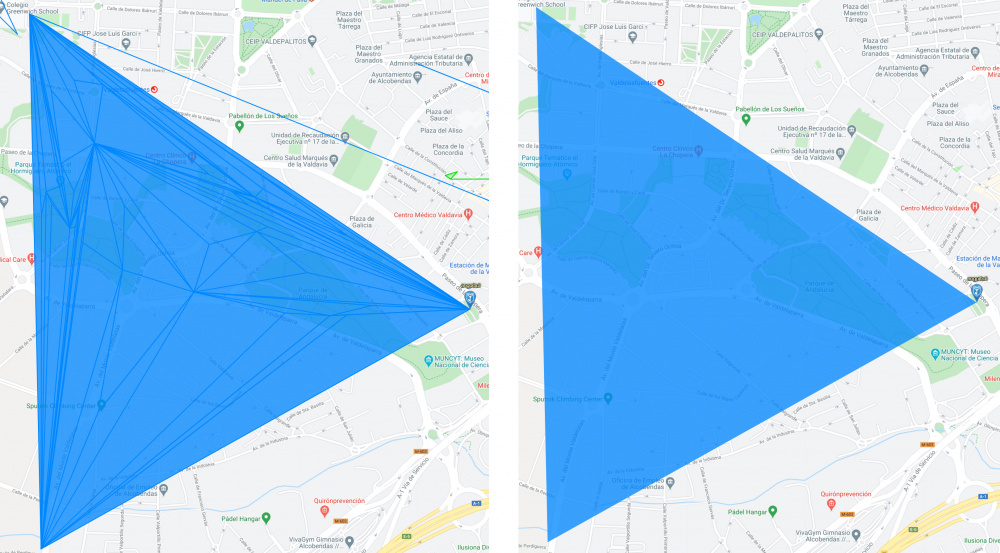 I started again at about 14:30 and I was able to finish the next two HCF4 and continue building some of the HCF3 and HCF2 "spikes". It was at this point, after walking 18.43 kms, when the top anchor was attacked by an enlightened agent, after some minutes of recharging, the portal was neutralized. After it, some other portals were taken down making impossible to rebuild the homogeneous field. The only possible thing to do after that was to cheer up, and for that, I had two experts on my side: DeltaIsAllin and krase73 came to Alcobendas to have a beer, chat and make me laugh a lot :) 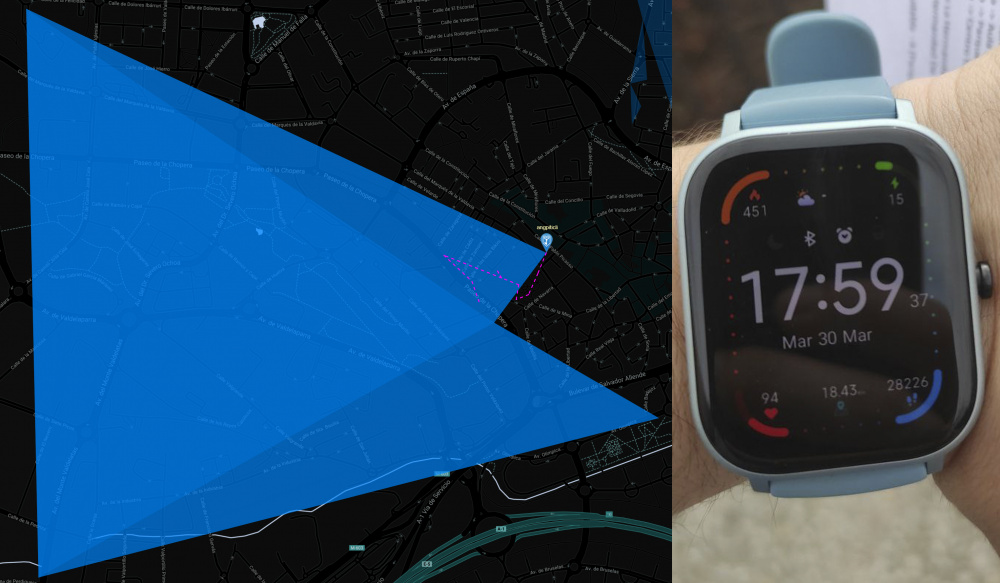 Second attempt: finally, we have an HCF6 in Madrid!

People who know me know that I'm very stubborn (some people might say that I’m tenacious, I would insist: stubborn), so I continued having in mind this HCF6 project. After Eastern I had a big load of work and it was difficult to find a complete day to try it again. I decided to make some work in advance (sleeping even less), so I could take a day off work. One possible day was Thursday, 22nd of April, so the previous weekend I went to farm the missing keys from the anchor below, the center and some of the "semi-centers". Farming the keys from the top anchor was again easy with my everyday commuting routine. The announcement of the Matryoshka event happened just before this and it reaffirmed my mind: I wanted to do this solo HCF6 without using the Matryoshka method that apparently seems to make things easier (remember, I’m very stubborn), so it had to be that Thursday.

The night before some drawbacks appeared: the forecast said that it was going to be raining all the morning until midafternoon, and I remembered that I had to go to vaccinate for my seasonal allergy. No worries: who cares about rain having a colorful pink umbrella!?

Forecast was right, at 8:38, when the first link was done, we had a light rain (called here chirimiri) that continued until 14:00. The first part of the fielding took place in two big parks nearby which were covered by mud, it was fun, but it took more time to walk from one portal to the other. 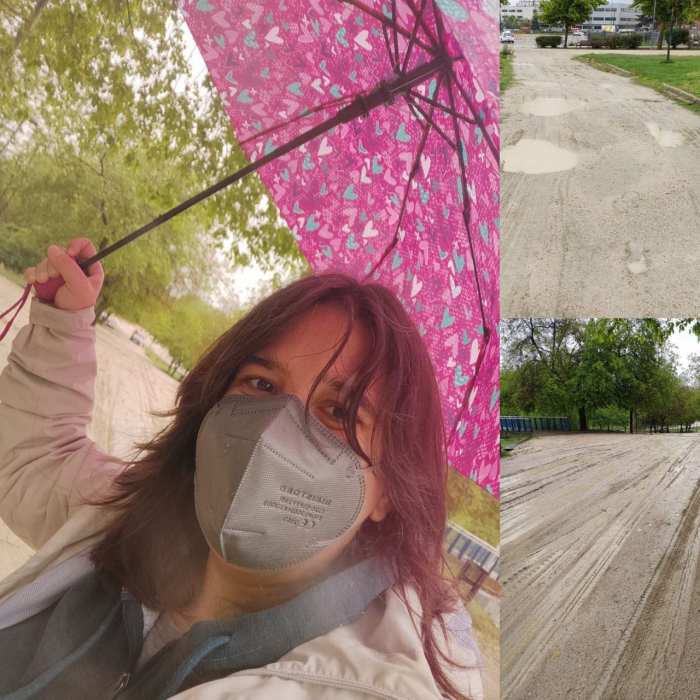 In the middle of this, I took a break of a bit more than one hour to go to the health center and come back. The first HCF5 was done around 12, I continued with the next two HCF4, everything was going smooth, I only had to clean some blockers thrown by one local agent. Two Jarvis were also used at this point to fix two linking problems: the fist one at the third portal!! I was so sleepy at that point. The second after having some connectivity problems, the link coming out, after 30 seconds, was not the one I chose. 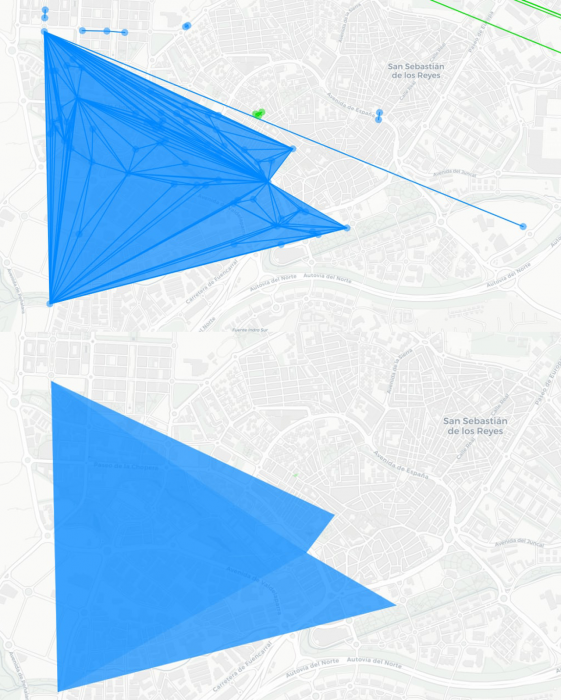 Around 14:30, after finishing some small spikes near one of the HCF4, I went home to walk Pepa (my dog) and grab some food (strawberries!!). I continued with the fielding about one hour after. At that time of the day, we didn't have any rain at all, and the temperature was warm. This part was in the center of Alcobendas, I parked the car for the last time (I only used it twice before and one to commute home) and I started a crazy walk ending up in the biggest park of Alcobendas. At that point, some of the portals were attacked by a local agent, I was able to recharge some of them, but some of the resonators were gone. Luckily, the links remained up and they were inside some other fields, so I didn't have to link there anymore.

After this small incident, everything went smoothly, a lot of walking and a lot of crossing outs in my linking list. At the end of the journey, two resistance friends, grandpa sp3ck4 and primo Shudderwock, came to meet me at 19:30 in the last 3-4 portals to cheer me up and to join me in the final linking game, the one from the right anchor. We drove to that remote portal in the corner of Alcobendas, and I started to carefully throw all the links, meanwhile they were chatting about the place we were going to have the beer afterwards. 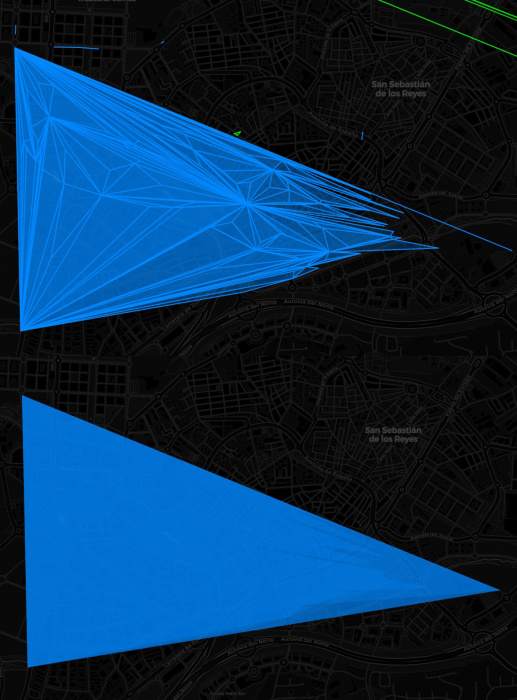 At 19:58, the last link was thrown. Papaveris and Yunwox88 checked the result and made some screenshots of my first solo HCF6, AlcoH6, the first HCF6 of the region of Madrid, and possibly the first solo HCF6 in Spain. 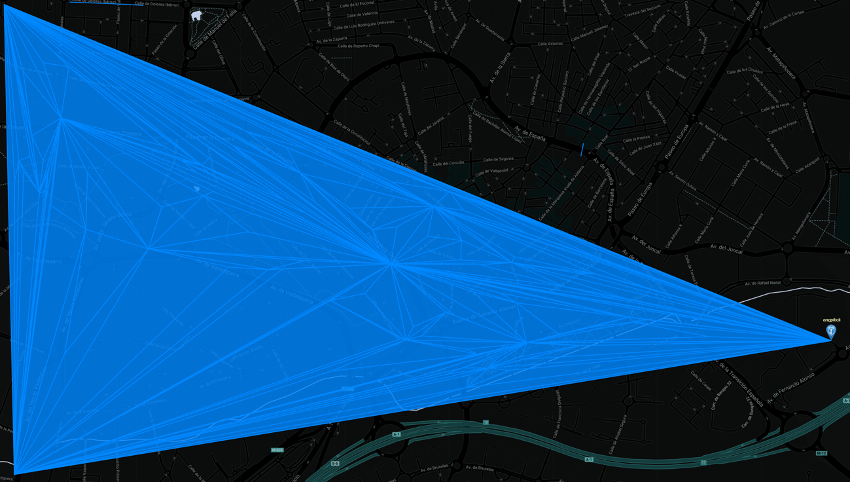 Some statistics: (we need numbers)

Total time: 11 hours and 20 minutes, with two stops of about 1 hour each. About 9 hours of ingress playing. 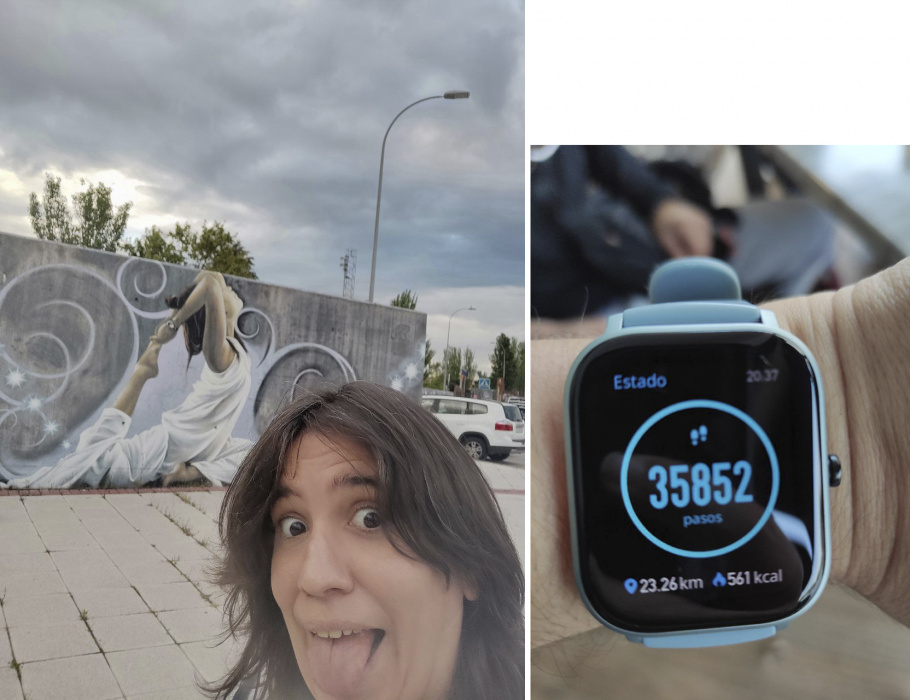 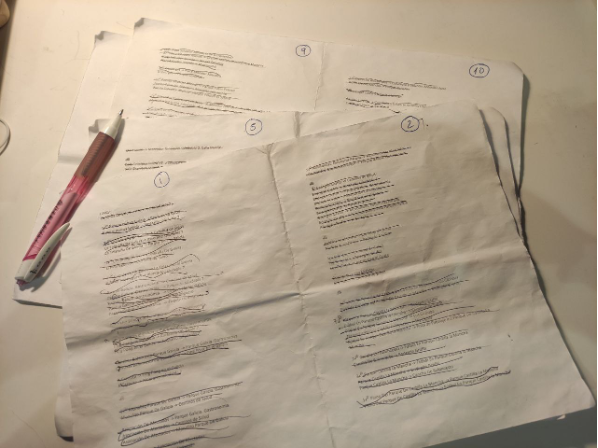 The notes after the rain and after finishing! 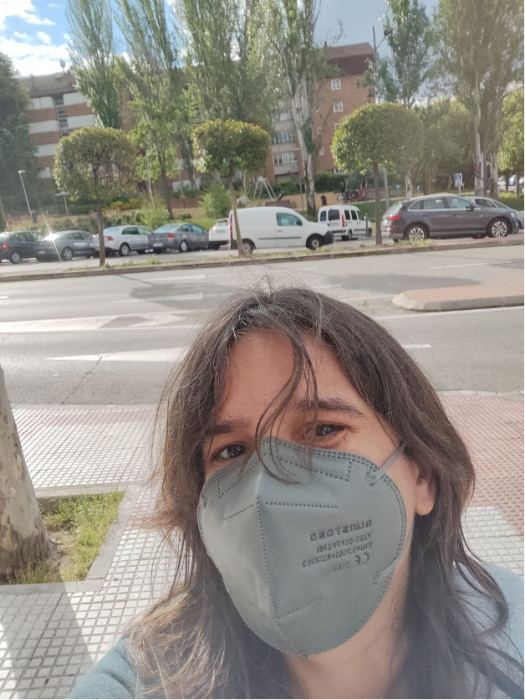 From portal to portal, passing near the center of the HCF6 (behind me).