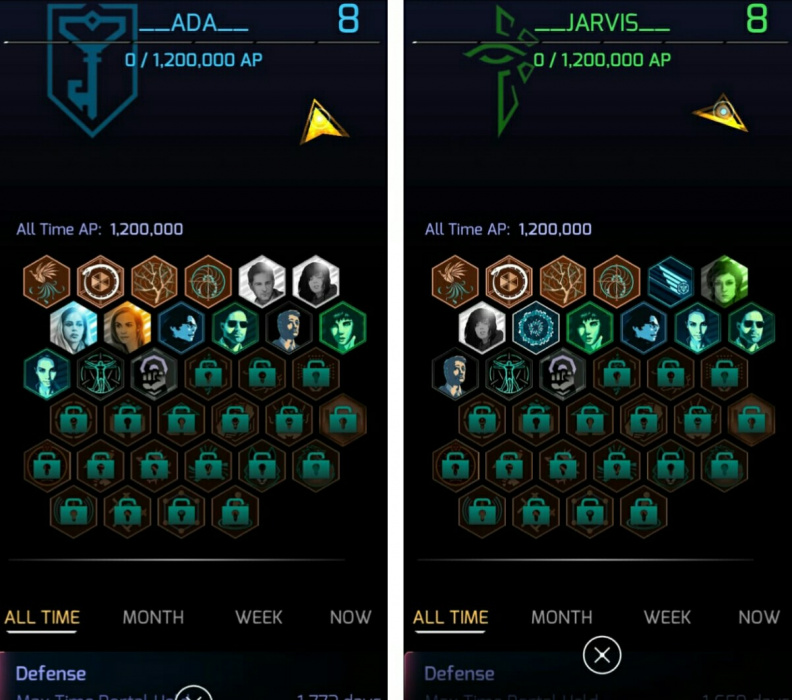 I noticed something unusual in both ADA and Jarvis AI medal.

If we look at the yearly medal, the first yearly medal they have is Luminary or year four medal. They have bronze year four medal which was awarded to level 3-level 8 agent by November 30, 2016. Strangely, they do not have year 2 - innovator medal and year 3 - Vanguard medal even though they also have founder medal which was awarded to agents who reached level 5 or above by December 14, 2013.

It means, normally, they should have year 2 - innovator medal and year 3 - Vanguard medal since the lowest requirement of year 2 and year 3 medal was level 3. In which, they should automatically have it if they already reached at least level 5 at December 14, 2013.

However this unusual condition is actually not impossible.

This can be explained by two perceptive :

This situation can happen if they change faction after obtaining founder medal. By changing faction, their AP will reset to 0 AP and their level will fall to level 1. The medals are not reset after changing faction.

There is also probability where they level up and change faction repeatedly those their level are below level 3 by the end of year 2 and year 3.

At year 4, they level up, and reach at least level 3 and obtain bronze luminary / year 4 medal.

Both ADA and Roland Jarvis has prominent role in the beginning of ingression. It is reasonable if they reached level 5+ as an agent by December 14, 2013 those granting them founder medal.

There are 2 probability why they don't have year 2 and year 3 medal:

Due to the dynamic situation, filled with faction conflicts, their level fell below level 3 during year 2 and year 3. Since ADA was an AI which was different from human agents , and Roland Jarvis was shot and his intelligence merged with portal network, there was many situations which made them change their level.

It is also possible that they changed faction repeatedly to enable them to dive and disguise freely in portal network.

They regain level 3+ at the end of year 4, those granting them luminary bronze medal.

When the 2017 13 Magnus Reawakens Anomaly, the profile agents of ADA and Jarvis manifested fully after the introduction of ADA Refactor and Jarvis Virus. Since that time, their level and AP are constant at level 8 and 1,200,000 AP.

It is also explaining why they don't have year 8 medal-resonance. Unlike previous year medals, Beside minimum level requirement, there is also minimum added AP during year 8 to obtain year 8 medal. ADA and Jarvis has 0 AP increased during year 8, so, they did not obtain Resonance medal.

It is simply the agent profile of ADA and Jarvis AI developed in year 4 . Thus, they are granted year 4 medals/iluminary medal. However ADA agent profile absorbed the large amount of data owned by ADA and Jarvis AI absorbed the intelligence of Roland Jarvis . This data and intelligence absorption included their spirit/consciousnes as the founder. This is how they obtain founder medal even though they were only developed in year 4.

With many parallel universe of ingress, many possibility may happens. Both ADA and Jarvis AI may have their own unique story in each of universe.