When qualifying with 1 star, a list is displayed to mark the reason for the poor rating of the nomination.

In the "Abuse" section, it is translated as "Maltrato" (In English this would translate as "mistreatment"), which I don't think is correct. Yes it is true that they are synonyms, but in this context it is unintelligible.

"Maltrato" is a word related to physical, psychological or moral violence, but it is not related at all to the abuse (excess, exploitation) to which we refer to qualify in Wayfarer.

This is a problem because within the abuse category there is the reason to report codenames, for example, and under the name of "Maltrato", this can become confusing (writing a codename is violent? No...)

With leaving it as "Abuso" (similar to English), I think it would be solved. 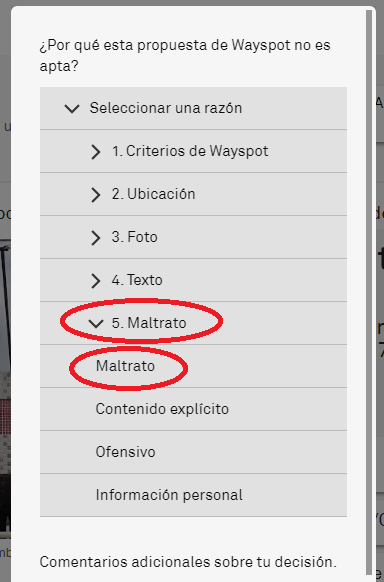