I'm writing this as I'm disappointed with how Niantic reacted to someone's report of my recent portal submission.

I submitted "ŠRC Ante Bužančić" memorial stone - a memorial stone dedicated to the last fallen soldier of our recent civil war which the nearby sports-recreational center got named after. It is also a sign how the fields with sports terrain belong to a newly opened sports-recreational center. It is safe, pedestrian access is there, it has underpass stairs which makes way to it even safer, it is publicly accessible and used by everyone. (SRC stands for "Sports-Recreaional Center")

The submission was approved and the portal went live. One day it got removed.

I assume it is because someone reported it with an excuse how the sports-recreational center is school's playground but actually IT IS NOT. It is a separate thing. The school's playground is located behind the school while sports-recreational center "Ante Bužančić" is on the other side and is separated from the school with the wall and the fence (I know what I am talking about because I live across the street and I attended this school when I was young). 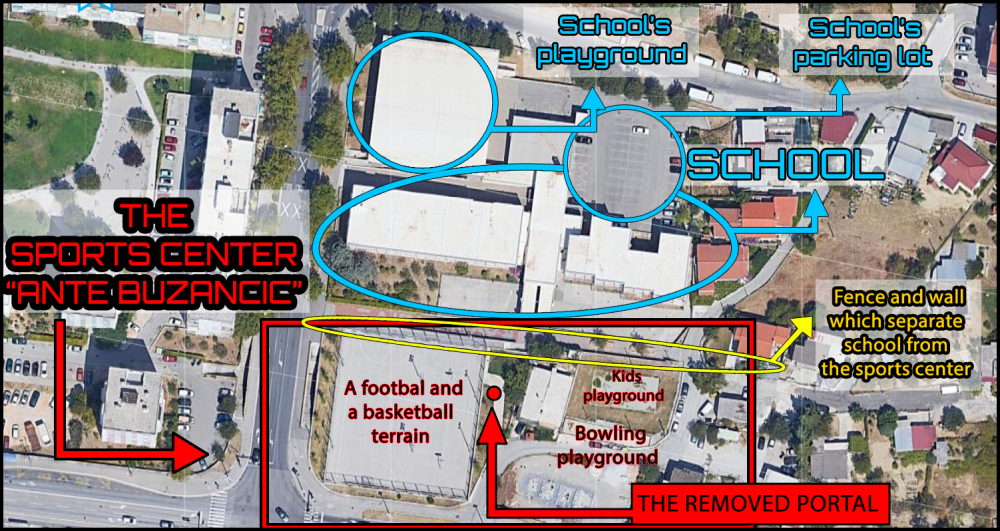 Those 4 portals have already existed on intel map for over a year until someone reported them and Niantic removed them.

Here's a video where I personally explain the sports-recreational center: https://www.youtube.com/watch?v=IawiknfLVMU

The sports-recreational center I am talking about was opened last year (Oct 19th 2019) with the presence of the country representatives (president, regional mayor, city mayor,...) and there were articles about it in THE NEWSPAPERS and on TV. Take a look: https://www.dalmacijadanas.hr/na-ravnim-njivama-otvoreni-sportsko-rekreacijski-centar-i-spomen-obiljezje-u-cast-anti-buzancicu The article is on Croatian language (my mother tongue) so I kindly ask you to use Google site translate.

Two days ago I even asked a man who lives near the center to tell me more about the place. Amongst other stuff, he did tell me how all those fields belong to the sports-recreation centre and not to school :)

I kindly ask Niantic to return the removed portal "ŠRC Ante Bužančić" as it is completely valid.