This is the first part of the three. The other two can be found here:

👉️﻿ Of rainbows and pots of gold

The end of the year was drawing near, behind us a victory in the Dresden anomaly and the successfully finished bold challenge of building an L6 HCF in the middle of the Moravian metropolis. The time had come to wrap up unfinished matters before the year was over. Mainly finishing the World L6 HCF timeline I had been working on all year. Not alone, mind you. It has been almost a year now since I contacted the Australian XM Research guru, agent @57Cell , and later invited him to join me in this project.

We were poring over reports and registrations, reading them through and bouncing off one another our observations, opinions, impressions, anything that piqued our interest via Telegram. Every now and then, when we were starting to get dizzy from it all, we would interject something off topic, e.g. about equilaterality of HCFs, structures made of zero fields and other interesting aspects, or about reports unrelated to HCFs that caught our attention. And it was in one of these moments when the initial idea was born:

It was still just a hint, a faint twinkle somewhere at the back of our minds. But it took hold and it didn’t fade into oblivion. Fade, my word! It started to smolder, catch fire and finally it roared with a blinding flame! All it took was 20 minutes and these sentences appeared in our conversation:

Yes, this is the story of how one field art report inspired the birth of a completely new approach to a different area of HCF building, one unknown and uncharted, which eventually paved the way to overcoming the impossible. And it is the story of one double portal, one cooperation of a smart cookie from Australia with an enthusiast from the other side of the planet, the heart of Europe. There are two parts to the story:

👉️ in the first one a car full of agents ends up driving in the night with incredible faith in said enthusiast’s words into the unknown, beyond the borders of their country, to do the hitherto impossible.

👉️ in the second one we hush everything up and quickly and quietly prepare an international operation, the revelation of which would surprise the whole HCF community.

The idea grew stronger and I immediately started looking for a place where we might place it and let it grow into all its beauty. What did that take? Firstly, a great amount of time. I, and fellow CZRES agent @TajnejHajnej, resolved to search through the Czech Republic to see if we could find a double portal. Alas, the longer we looked, the more it seemed we would not be able to find one!

As chance would have it, right on the first day when I was accidentally browsing the anomaly cities near our borders, I came across a small town near Dresden. It was absolutely great! There is a double near our borders. And @TajnejHajnej, author of the first Czech solo L5 HCF,  lives near this very border! We gave up our search in the Czech Republic, and resolved to use the double portal in Radeberg as the pinnacle of our bold experiment. 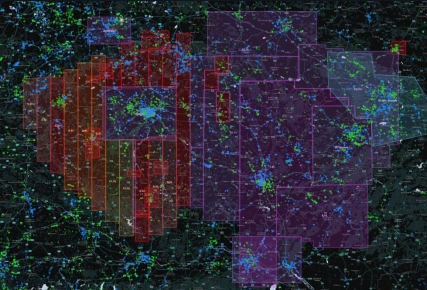 Concurrently with this search there was a discussion happening between two agents from almost opposite sides of our planet. @57Cell and I were developing a theory of how to achieve the most efficient result possible. Well, to be perfectly honest he was the Master and I the mere Padawan, a sparring partner. I was glad to keep up with the flow of his thoughts and the peak of my contributions was when I managed to add a few reasonable and theory-beneficial ideas of my own to his ones a couple of times. The think tank was going full throttle, ideas were emerging to be subsequently verified or rejected by the other one… 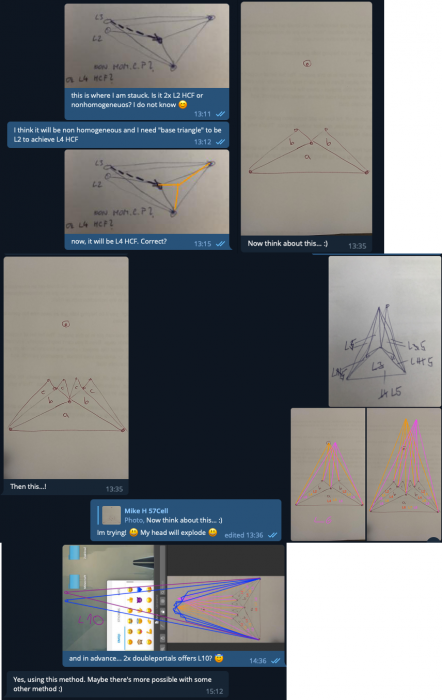 7 hours after the idea was born… it’s still November 6 and the ideas are spilling out of the app!

It took a little over a week and on our table we had a clear methodology and a draft of a verification test schematic as well as the expected building schematics for an L7 and L8 dHCF. From now on it was fully in my hands.

👉️ You can continue to the next part right here !