I've talked a bunch about my Father, who is Enl, before but this story goes out to my mother, who is res. Yes, i convinced both my parents to join the game I'm obsessed with.

I convinced my mother to join ingress about 2 years ago when I found out she lived close to Cross Plains Texas, which if you know, is a favorite place of John Hanke and a place where a lot of old ingress lore resides. My mother however didnt play more than downloading and seeing there was one portal in her town until last year when the 3 part howcraft media released in Cross Plains and I asked her to go and hack the entire town to get the media for investigations. My mother's first three levels came from her going up and down that town hacking and deploying on every portal she could to get the media. Her first real involvement in Ingress was doing an investigation adventure for me.

Fast forward to today. As some may know i had surgery almost two weeks ago and for the first time since my mother joined ingress she flew to my home town in California to help with my recovery. Today was the first day I felt I could cargress and my mother just happened to mention "oh yeah I still have that game on my phone" when I stopped to glyph. Knowing the #umbrachallenge was happening I decided we would go out to get her first tier badge and level her cause why not? Well, we did much more than that.

The moment my mother saw my abundantly grey and portal filled town she was determined to capture every portal she could see. I took the opportunity to teach her the How To's of the game and with not even 30 mins of playing she got her first tier of the #umbrachallenge and her first ever ingress event badge. But she was not finished, she continued to get more and more badges and then levels. I was upgrading her portals and hacking to get keys so she could field and level. Before I knew it I achieved my second tier of the Umbra Challenge badge, a badge I didnt think I'd get, playing ingress with my mother with the first time in person.

My mothers second tier Umbra Challenge badge came shortly after along with her gaining level 6. In total my mother gained 5 badges and three levels and the only reason we stopped was because my phone died and I couldnt help upgrade any more portals. The Umbra challenge badge officially became one of my most memorable badges in my scanner as its second tier marks the first time my mother and I played together and both got the same tier together on christmas eve.

To further add to this, my mother knows the importance of investigations to me, so she kept all of the keys and the media from her first ingress adventure and gifted them to me tonight after our first adventure together.

Ingress has been a way for me to heal in so many different ways and given me many chances to show the people I love something fun we can do together. Both my parents have unique relationships with me in this game and I am so happy that I've had this opportunity to share this with them and have something marking my profile and inventory to memorialize our time together. My gifts may be pixels but they have memories and laughter attached that will not be forgotten. 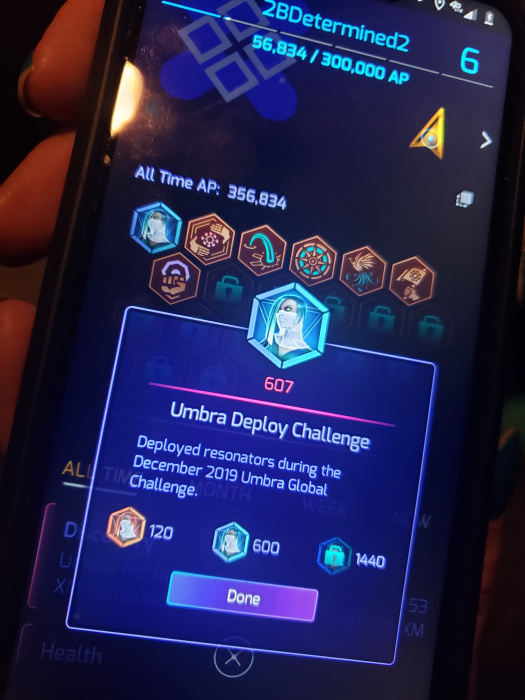