Title of the Portal: Horizont Observatorium

Screenshot of the Rejection Email: 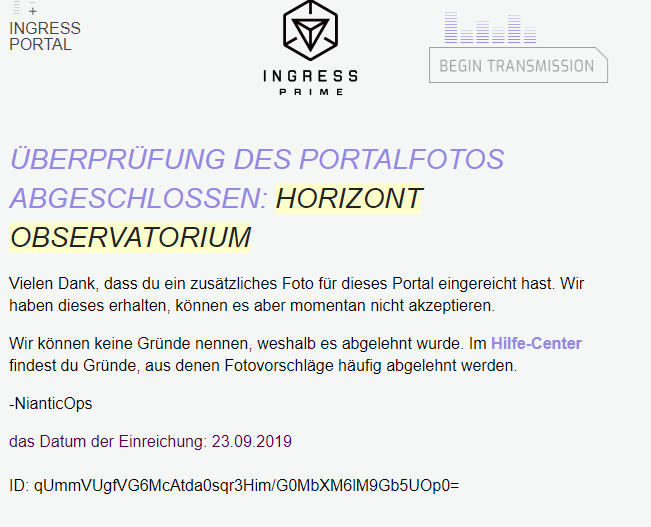 Usually I don't submit appeals for portal photo rejections, because the assessment of pictures is a matter of personal taste. When a reviewer rejects it, there might be a certain reason. But in this special case I'd like to have a special connection to the picture, because it took some effort to make it. I don't want to brag overly, but in this case I think that it turned out quite nice.

This is the picture that got rejected: 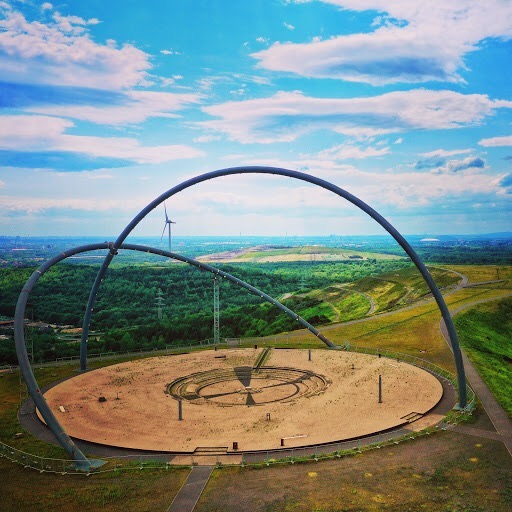 This cool structure is located in the Hoheward landscape park in Herten, Germany. It consists of two tips - the Hoheward and the Hoppenbruch tip – and is the largest s l a g heap of Europe. Visitors can walk around on diversified hiking and cycling trails up to the top of this man-made mountain/hill. Once you reach the highest platform of the Hoheward tip you can experience one of the landmark art installations of the Industrial Heritage Trail - the “Horizon Observatory”. It is made up of two great curving steel arches which can be seen from far and wide. A very great example how former industrial coal and steel areas can be converted into a center for science, education and sports.

I went there in June 2019. First I had to climb 1000 stairs (which are another portal). Then I wanted to take a picture which shows the structure from a new perspective. So I used my drone to take some aerial shots. I had to fly very carefully due to the high winds up there. My drone can fly up to 72 km/h. When the wind speed is near to this top speed than it might be impossible to return the drone to its starting point. So I had to fly first against the wind's direction to have enough reserves for a safe return. A small video clip can be found on my instagram post. It was a cool hike with awesome views and I can endorse anyone in the area to visit this cool place. Directly or by doing the great banner "Route der Industriekultur" (Industrial heritage trail) which connects a lot of these cool post-industrial landmarks.

I submitted this picture on June 10 2019. I got rejected in September. This happens sometimes. But since I didn't found a reason why this doesn't meet the acceptance criteria, I resubmitted the picture on September 23. It got rejected on November 20 (yes, Niantic got a lot slower at reviewing this submissions than a year ago).

Well. I was bit disappointed. But I would usually have shrugged my shoulders and closed the case. Adding a cool picture to the portal network is like a gift of intellectual property and nobody is obliged to accept any present.

But in this case I got an acceptance mail for another submission the same portal. I had been curious whether a picture from the ground would be more acceptable, even if it's of a much lower quality. So I had submitted another candidate made with my smartphone: 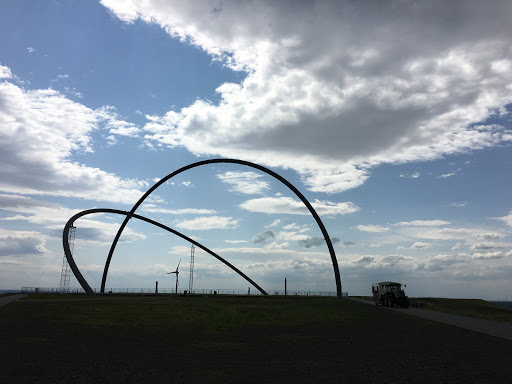 And well, this one got accepted. That was the moment when I lost faith in NIA Ops. At least for some days. Then I decided to make an appeal in order to understand better what's going on.

Is there a chance that the rejection of the drone photo gets revised? If not, is there a special reason for rejecting the drone picture two times? Did I miss a rejection criteria for accepting new portal photos?