TL;DR: It would only take one wrong link to lose this shard to people that would keep it blocked indefinitely; we waited until we had a long-term plan that we were happy with.

The Avenir Shard number 6, Omniscient, spent a whole week “trapped” in Bucharest, Romania, Eastern Europe, barely moving, before going on an amazing journey across the Ocean to the target portal in Oklahoma. Here is the story of why it stayed, and why it left.

The relationship between the Enl and Res factions in Bucharest is quite cold - we mostly ignore each other. It used to be much worse in the past, when any communication was non-existent, and the actual details of why things are like this don’t matter. Nationally, outside Bucharest, there are very few cities with more than one or two active players. Both Res and Enl successfully played global shards before - quickly moving shards in and out of the country.

I’m agent @sanshine, L16 ENL, former PoC/orga for the Recursion Prime Bucharest anomaly in November 2018. Me and @bertton, who was the RES PoC/orga for that anomaly, go way back - we collaborated on bringing people to the monthly Ingress FS that he organizes. So, naturally, we started discussing the shard situation as soon as it spawned, even though things were quite vague at this point.

I became aware very soon that there is an international Enl group of Saboteurs, trying to steal and bury the shards, in protest mainly to Niantic making the shards game XFac. I knew many names in that group, there were influential people from countries very close to Romania. My personal preference was towards a one-sided operation, where the shard is scored in Milan by the Enlightened, without any Resistance help, and I hoped that such a plan would gain the support of the Saboteur group, but it didn't. In addition, I was contacted by an Enl representative from Milan and found out that the target there is under XFac control - so to score a shard, the local Resistance would need to know about it, so my plan would not have worked. In addition, we polled the local Enl community and found majority support for XFac shard operation. From this comes the first decision: keep the shard inside Bucharest, for now, where there are plenty of agents to keep an eye on it at all jump times. I found out from @bertton that the Resistance plan was to try and extract the shard to the South of Bucharest, from where it could be shipped maybe to Serbia or to the Black Sea; we knew that there was strong Saboteur support in both those directions, so, to prevent them, the first shard fight began at the 3rd jump opportunity. Neither faction won, and the shard stayed in place. We opened a conversation with Res about our reasons for keeping the shard in the city for now.

Since it became clear that only an XFac effort could score the shard, we created a group chat with Res and Enl representatives for Bucharest, Milan and all the places in between: Serbia, Croatia, Bosnia, and later Bulgaria, Hungary and Austria. We started looking at possible routes, checking the available keys and the number of agents willing to take part in cleaning; we agreed to only move the shard when we have a reliable path to scoring, otherwise we risk losing it to the Saboteurs. During this time the Bucharest agents from both factions fought to try to reposition the shard, mostly for fun (Enl agents kept on trying to move it to a beergress portal). We didn’t communicate that to the Res very well, and so there was some tension from the fact that while we were discussing extraction plans for the shard, our agents in Bucharest kept attacking the shard, trying to move it. Ultimately we let people in both factions know that the shard is up for control battle, as long as it stays inside Bucharest, as there are XFac plans being worked out on scoring it.

Early on, Milan announced that they had a Bucharest key, left over from the anomaly, so a one-shot plan was possible.We looked at the blockers in the way, we talked with those countries’ representatives, but we could not find solutions for cleaning the way. We found Milan keys in Bucharest, and a few from Venice, but those plans went nowhere too. We looked at pushing the shard to Hungary, and asked them if they can continue the path - there were discussions around Croatia, but again we got stuck. We found Munich keys, and asked Hungary and Austria if they could clean a path, but the mountain blockers in Austria were too much of a problem. We looked at an Eastern route, over Black Sea to Turkey and then East, but there were many blue blockers over the Mediteranean that would have had to go, and apparently that wasn’t an option.We had many Greek keys, but that would need to cross Bulgaria which was full of long links, and then we would still have had the problem of the Mediteranean. We finally (after 4 or 5 days of looking for ideas) found some keys from the border of Austria and Hungary, in a position that would have avoided all the hard blockers on Romanian territory, and the reps from Austria and Hungary started looking at cleaning solutions for that plan.

While all this was happening, there was a constant stream of messages coming on COMM and Telegram, aimed at any player that could be seen near the shard on Intel. Most of the messages were asking agents to move the shard, accusing them of betraying the faction, making fun of our lack of results, or were just mean jabs. People everywhere were baffled at why the shard was not moving out of Bucharest, and wanted us to “just throw it towards the target” like a hot potato - even though we had almost no way of controlling it outside of Bucharest without any agents present there, and the risk of it being stolen was too great. Additionally, there were a number of spoofer attacks on the shard - we counted about 10 banned accounts in total, which made us even more wary of sending the shard out into the open. We talked with local Res, and after everybody had their fun with the shard, we decided to hold it in place in a somewhat central location, under a field. We created a local XFac chat so that everybody can discuss their ideas.

On Saturday the 21st our local Res coordinators @bertton and @Lynoocs came with a proposal - they had keys from Southern Italy, near Lecce, and Res could clear a path between Southern Romania and Lecce; we just had to first move it South, and then link to Lecce. The problem was that there were a few hard blue blockers on the way, with nobody available to take them down, so we would just have to wait until they decay (which would happen around Tuesday). It was the best plan we had so far (only 10 blockers or so in the way), but it was also very fragile - if the exact path we want to use gets to someone who wants to block us all they have to do is to recharge those blockers, and the whole plan is canceled. For this reason we kept the plan closely guarded: we did not announce it in the International XFac chat that we had (only the Italian Res and Enl representatives knew about it), and we didn’t announce the exact route on the local chats - only that a few agents are needed to go about 3hr drive away from Bucharest to receive the shard and send it further along. 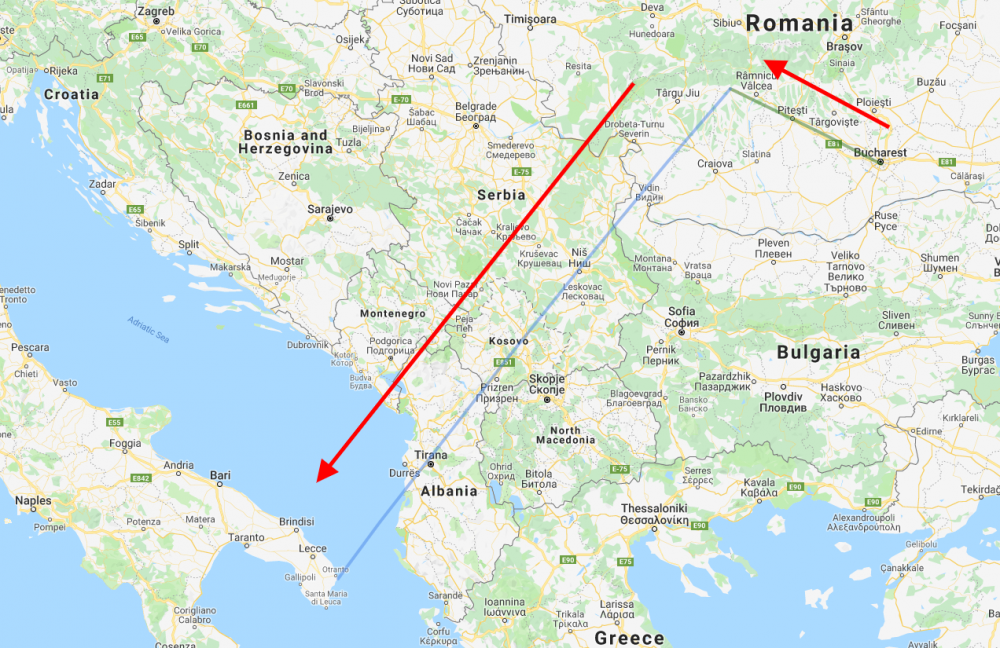 Tuesday night was chosen as the day to execute the jump. On Monday a few new green blockers appeared near Tirana, in an area where we had no contacts; we changed the Romanian anchor to a new position, near Horezu, in order to bypass those blockers, even though that created additional blockers in other areas of the link - those were difficult, but manageable in the end. Enl agent @Horicas offered to drive to Horezu, and Res agent @namskill would go with him with the Italian keys he got from @Bertton. I had the Horezu keys in Bucharest, and the portal was already green, so we could send the shard there once the path was clear. We called up people for the cleaning, send out warnings to avoid linking inside and outside Bucharest on Tuesday, and started working on eliminating the blockers one by one. By Tuesday evening things were in place - the inaccessible blockers were decayed, Horicas had started his journey to Horezu, and there were less than 10 blockers still standing between the shard and Horezu. There were a few scares - random agents creating random blockers - but they were solved swiftly, with all agents agreeing to let the shard pass. We decided to wait for 8:50PM (local time) to drop the last blockers and link - which went well, and the shard jumped. For good luck, the link was made by agent @SagaA, she successfully linked and sent a shard to Bulgaria during the Helios anomaly:

9PM came and the shard moved out of Bucharest.

We agreed with the Res to keep the link up, as a rail back to Bucharest: if cleaning does not go as planned for the next step of the way, we can send the shard back to Bucharest and maybe try again another day. The next jump is at 2AM (local time), agents are already at shard in Horezu, and the link is planned for 1:57. At 1:50 I can see the people following the shard game are getting really antsy - the shard is still linked to Bucharest, will it jump back? Was this all a troll move from the Romanians? Are they all really that incompetent? I have people messaging me, asking if @Horicas is a real agent or a spoofer, reminding me that the link must drop. At 1:57 the portal is turned blue by @Namskill who links to Lecce on the now clear path; immediately, Horicas takes out a single resonator to prevent any rogue incoming links that could prevent a successful jump. Three long minutes later the shard is in Italy and Horezu is made green to prevent a jump back. We did it!

We made a lot of agents happy with this jump, but not all (of course!). Plenty of Enl agents were pissed that we worked with Res on this one, or that the link out of Romania was blue, or whatever. The shard started an extraordinary journey that ended a few days later in USA (!!) where it was successfully scored, making it the shard that traveled the longest to target - both in length (over 15.000km) and in time (48 jumps in total). It only would have taken one wrong move to lose this shard, and so we hold on to it until the plan was "good enough". I am anxious to read the Res side of Omniscient's story -- many thanks to everyone, from all factions, who supported us!

The hero we need: @horicas