Every year, summer in Tokyo is getting nastier and nastier. It's not unusual at all that the air temperature goes higher than 35 degrees (in Celsius, 95 degrees Fahrenheit). Worse, the humidity is evil. However, if a fun idea comes up, it needs to be executed ;-)

Syun, my friend, is one of the guy who could eat 3 bowls of plain white rice by just thinking about fields. (It's a Japanese expression simply means someone is really enthusiastic about something.) I like to make fields but I'm not so good at it yet.

5th isn't that easy for the only two people to make in one day. We decided we would take two days. The first day was to make plans and collecting the keys, and the second day was to make the field. We also asked some advices from the local Agent, PrinzEugen1940. 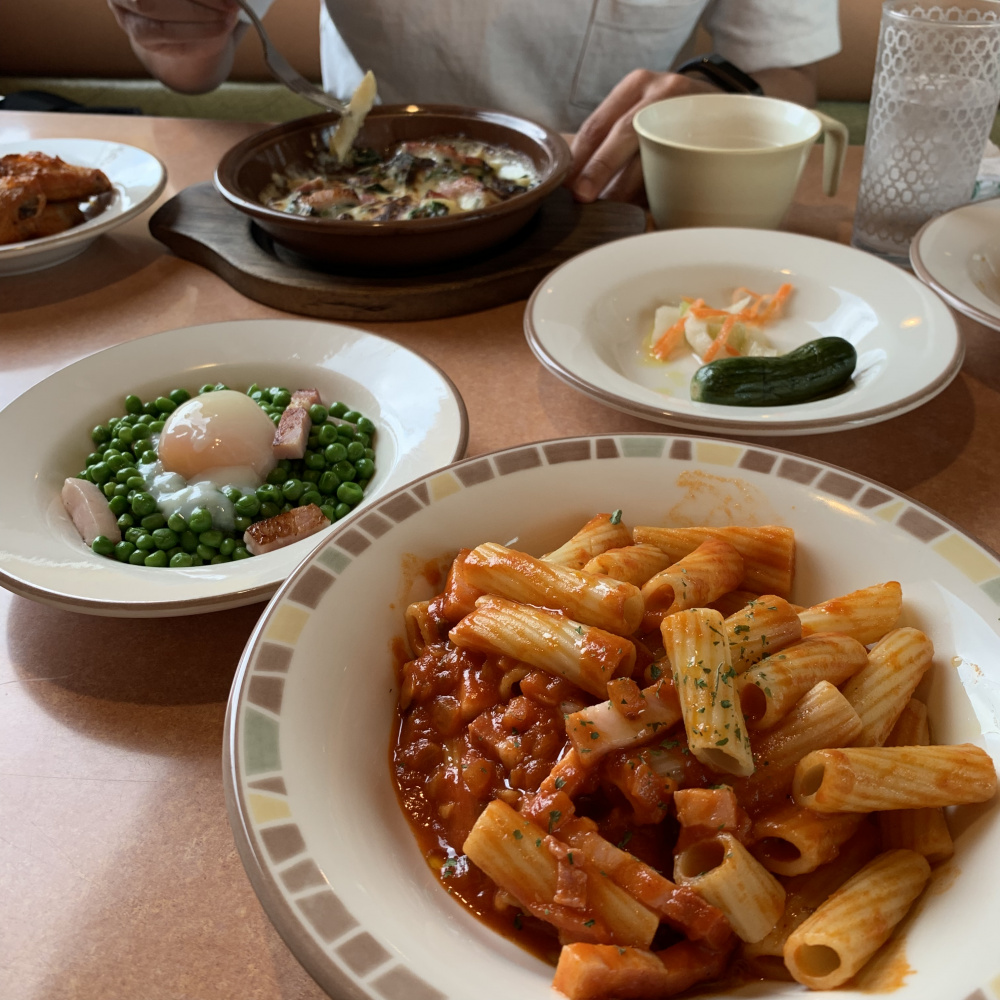 One afternoon, we had a lunch at a super cheap pseudo-Italian restaurant (but they have good food!) and headed to Kashiwanoha Park. 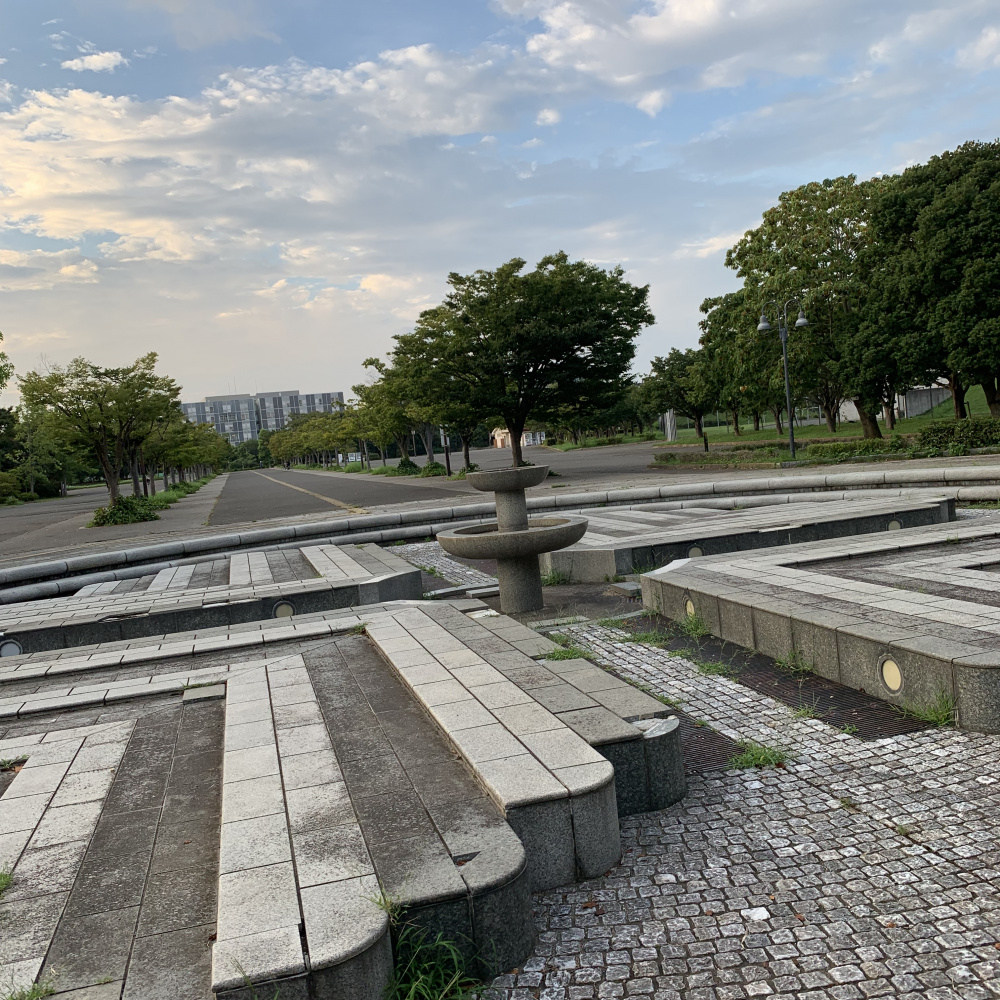 Kashiwanoha Park, Chiba, Kashiwa is a huge park with a lot of nature. They have ponds, botanical gardens, the adventure playground, and many other facilities, like restaurants, and a baseball stadium. It's one of the most portal-condensed areas in Kashiwa, and there is almost no traffic, so it is a great venue for working on complex fielding.

The weather forecast said the temperature was going up to 36 degrees C, with 80% humidity. (That sounds like a tropical island!) But the forecast was totally off. It was kind of cloudy, and the wind was soft and moist.

We chose a portal "Combukuro Pond" as one of the vertexes of the field. It was a stagnant pond, surrounded by all sorts of weeds and woods, meant that was a paradise of mosquitos. As we provided them some free meals, we threw in VR Heat Sink and kept glyphing. We needed a lot of keys. All the links to this portal was going to be IN-Links because we didn't want to keep coming back here.

We were restlessly moving around between hack intervals to avoid from mosquitos biting, and we were scratching all over our bodies. That was not pleasant at all. Although, I was liking the grassy smell there. "Mushroom!" I pointed down the ground. 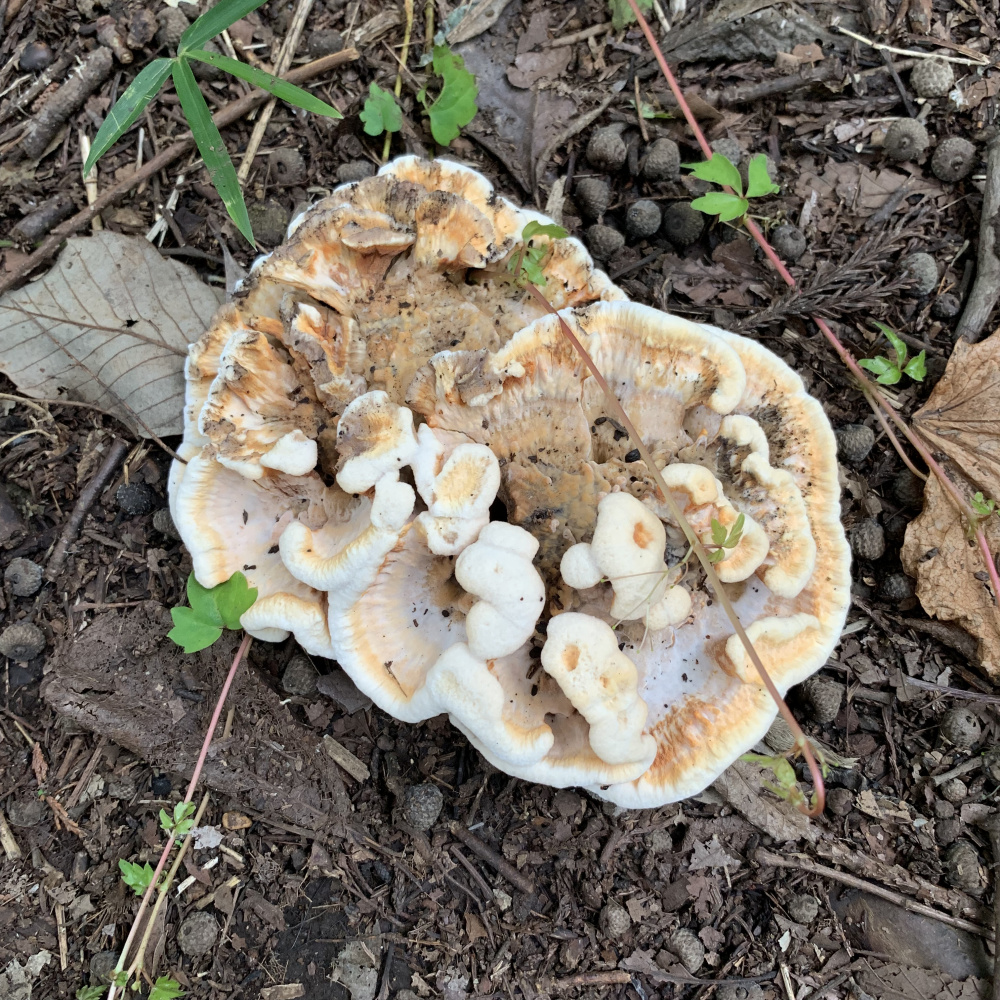 I saw a small tree which its leaves were partly stained brown and infested by insects or something. I took a close look and found a ladybug-like insect but its body was covered with slime-like stuff. "Isn't it a ladybug or some sort of scale insect?" "Ewww" Syun quivered behind me. I asked him if he disliked bugs. He said yes.

"How about crawfish?" I said, pointing the sign out said "Don't catch crawfish in this pond." Syun said; "I'm fine with them. I caught a lot of them when I was a kid." "Same here. What was the bait?" "Dried squid." "It's the same everywhere I guess."

-- There were a lot more small ponds and canals that we could find crawfish back then in Kashiwa.

We visited a portal "Wooden Swing" on the way to the central part of the park. We expected something cute.

Syun said he felt very high concentration of XM there so maybe it met the requirement to be a portal. I don't know. 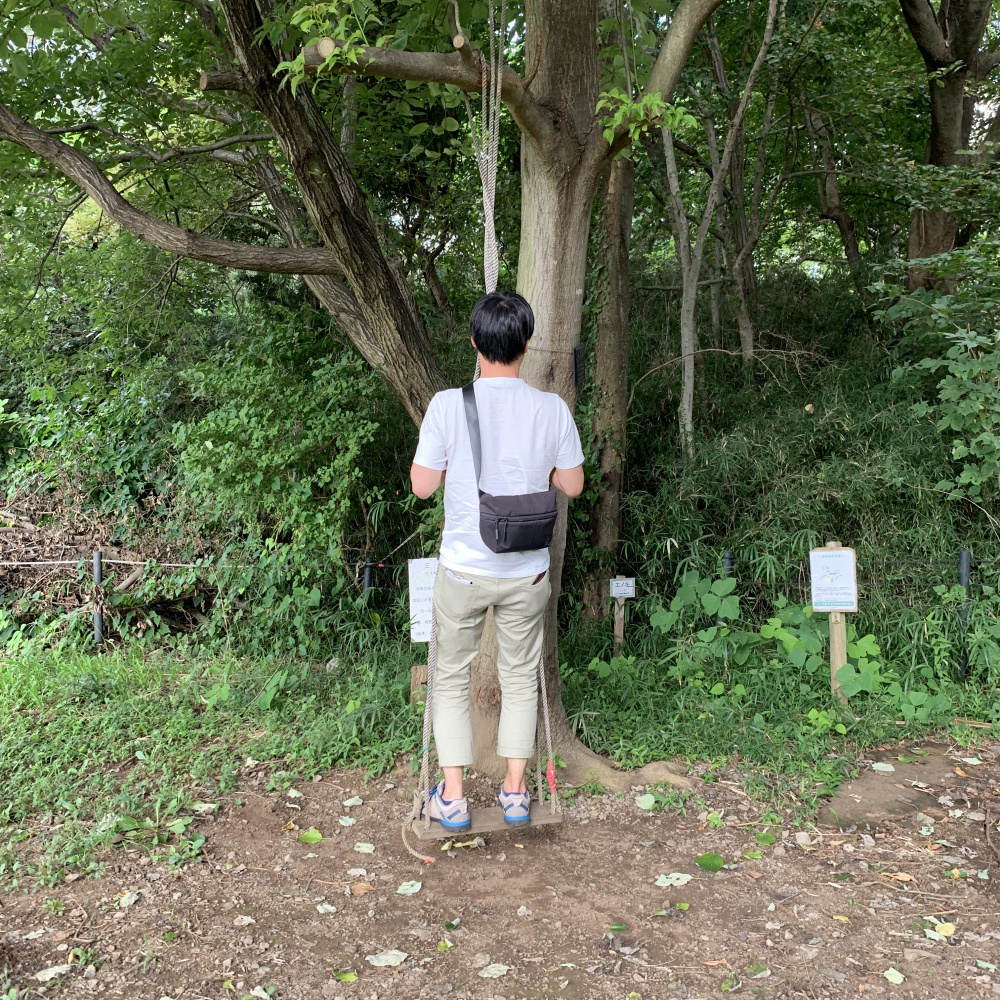 Another portal with very high concentration of XM, according to Syun. 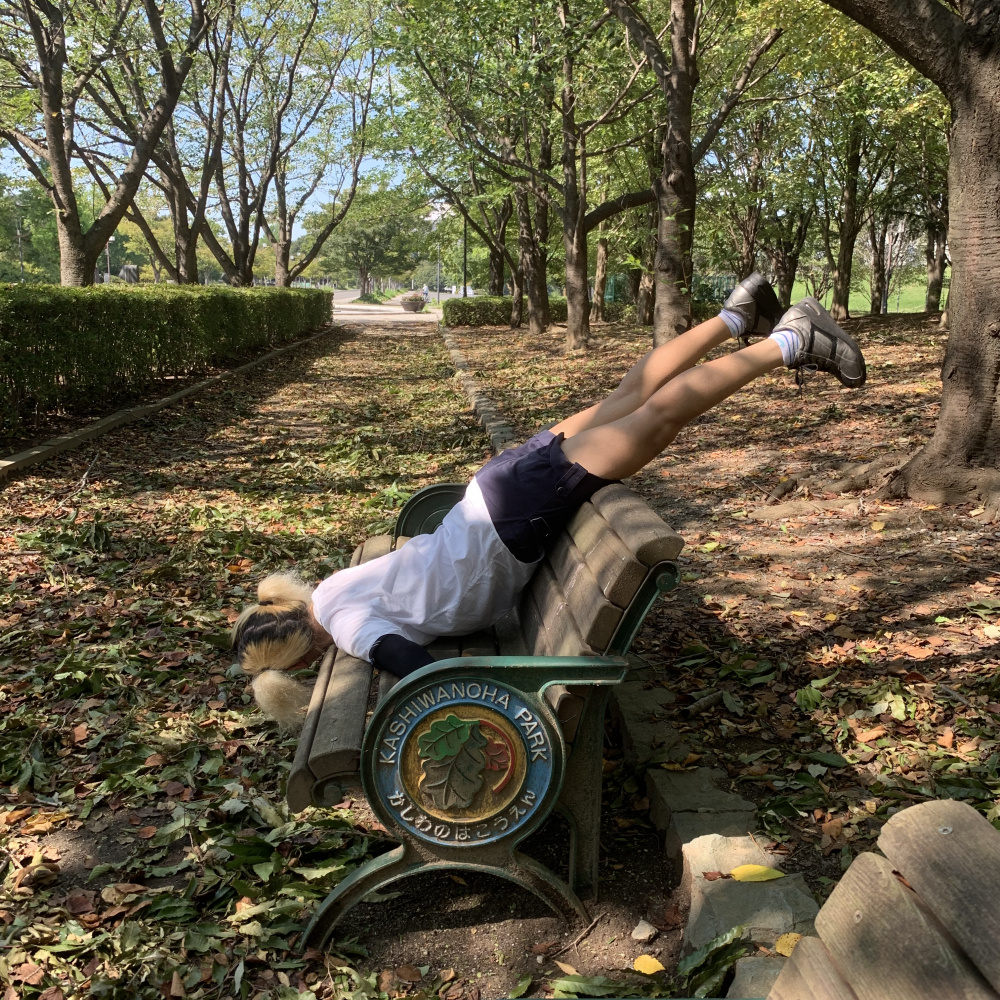 It started to rain when we were collecting keys at the park. We thought it would stop soon, so we went into a small cafe-like building. It was warmer and very humid inside, and smelled like bad food. I could not stay here too long, I thought.

The rain stopped shortly and we got out. we moved to other part of the park and kept collecting keys we needed. It started to rain again, pretty hard this time. We run quickly to a concrete building by the pedal boat station and hid below the ledge, avoiding to get wet.

The rain seemed it was not going to stop for a while. We were sitting there, doing nothing. Some time passed.

A hard rain wet grass and woods around. The dry concrete floor got wet and was sending out distinguishing scent that I kind of liked. A tiny dead beetle was lying on the floor behind us that I didn't tell Syun about. For some reason, the sound of the rain evoked the nostalgic feelings. When was the last time I took a shelter from a rain like this?

"Hey Syun, I think you are about my age. When you were little, and when it rained like this, and had to hide from the rain, and got all bored, what did you do? When we were little, we could always find some way to **** time I think. Do you remember something?"

He inhaled the air very slowly, and said; "No, not really. Right now, I can't remember."

I changed my position and stretched. I pointed wet grass out and told him that I played pharmacist **** up and mixing weeds and made "medicines." Then we talked about cooking a bit. Syun said he was really good at Chinese. I told him I loved making curries with authentic spices.

I was almost getting sleepy. The sound of a rain was also kind of tranquilizing.

He smiled grimly but nodded. -- I thought he would refuse.

We sang quite laud. Nobody was around anyway. When we finished the last line, we started to laugh. "What the heck are we doing? How old are we?" We sang The Frog Song twice. Then I sang some of the horrible local parody version of famous kid's songs until we realized the rain had already stopped.

We collected the rest of the keys, and went home.

The National Weather Service of Japan did a good job this time. 36 degrees C. 63% humidity. It was 10 o'clock in the morning, but it was already burning hot.

According to The Ministry of the Environment Japan’s website, above 35 degrees C, any exercise is generally prohibited. But it does not say anywhere playing Ingress is prohibited.

Although we still had to be very careful about heat stroke. It's been a serious problem in Japan. Many people die of heat stroke every summer.

We promised each other that we were never going to push hard, and if we felt any signs of heat stroke, we would stop playing and rest as we carried plenty of fluid, isotonic drinks, salt candies, etc. We also used Zello to talk with each other to make sure everything was fine.

We moved slowly from portals to portals, always tried to find shadowy spots. Luckily, there were a lot of trees. The sunlight was so intense and I could not see the screen almost at all under the sun. My phone got really hot and I really worried about thermal runaway.

The link sequence Syun made was perfect but I was nervous to make mistakes and mess things up. In less than an hour, we joined at the apex. One by one, we linked to 17 portals. When everything was done, we checked the map. It was beautiful. 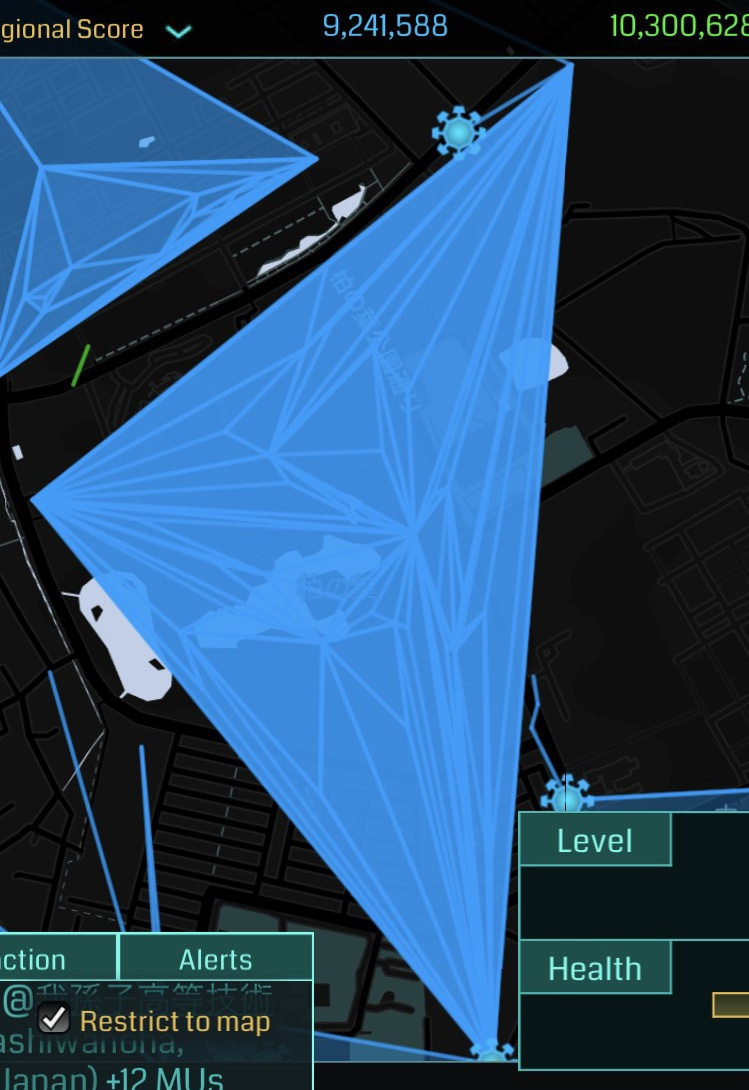 It took us 2 hours and 50 minutes to make the field including the link cutting. Our estimation was 4 hours so we were much faster.

I gave Syun a big hug. His back was sweaty. I bet mine was too.

Japanese people don't hug often. Some people, who's been to abroad like me, are making it popular. I think hugging is wonderful. 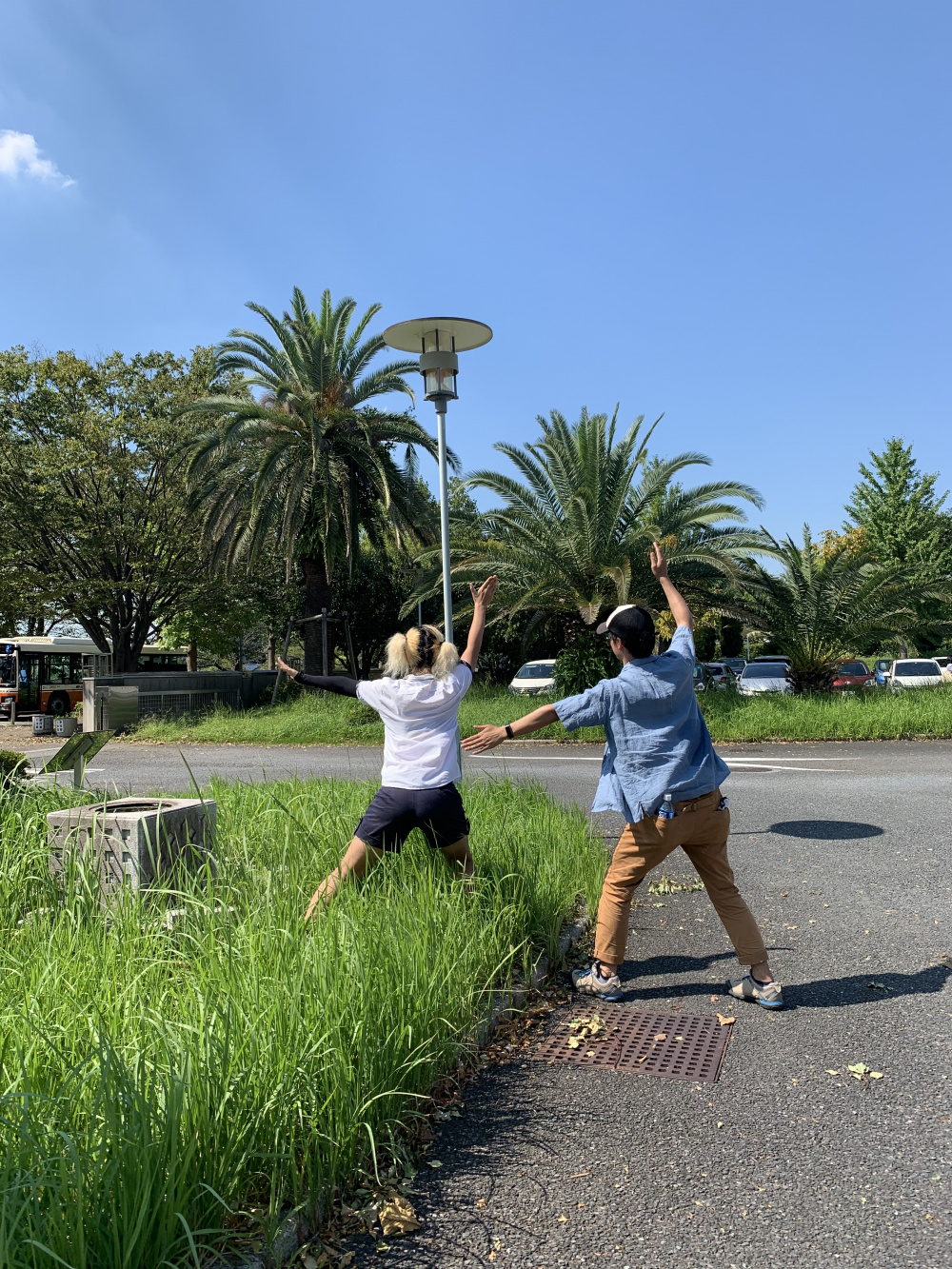 After we were done with fielding, we were planning to go drinking, but it was too early for bars to open.

We bought some cold bottled teas from the vending machine and sat down on the bench.

My whole body was sweaty and itchy. It was hot, but the season was already autumn. There were dead and dry leaves piling on the ground, and acorns were everywhere and some of them were stepped on and squished by pedestrians. Unfortunately, I did not see any of the edible acorns there.

We were bored again.

"If you were a little kid, what would you do?"

I asked Syun a sort of the same question as before.

"What would I do?" Said Syun, as he looked up the sky and put a tea bottle on his forehead; "Kick The Can, Maybe?"

"I never played Kick The Can. What's the rule?"

"Never? Really? It's simple. Someone kicks the can, and everyone hide before the tagger put the can back to the spot then..."

"I played "Police and Thief" a lot. We split into the police team and thief team and chased each other ...and stuff."

The sun was slowly going down.

There were also trimmed tree branches laying on the blanket of dead leaves.

I picked one of them up; "Did you play Samurai? The Samurai sword fighting."

"Very simple. I used to sword fight with boys using branches like those. Wanna have a match?"

"This should be good..." I slammed it to the another branch, and they both cracked in the middle. "Damn, they were too dry. Totally useless for sword fighting." As I said, I threw those branches away. "There is nothing to do here. It's kind of early, but let's get some beer."

So we went to a typical Japanese-style bar. The air conditioner was on and the beer was freezing cold. We were craving for this moment for all day long right? We toasted, for today's victory and for our effort.

Syun is usually a quiet guy, but after he had couple of beer, he started to talk about his childhood and stuff. He liked to "go on adventures" with his friends with a packed lunch. It was exactly what I did too. He told me he was from a rural area in western Japan, and he didn't like bugs because there were too many of them. On the other hand, I was born in Tokyo and finding cool bugs were my childhood dream. How interesting.

But awww how wouldn’t he love this guy?

(I found it at the Italian restaurant) 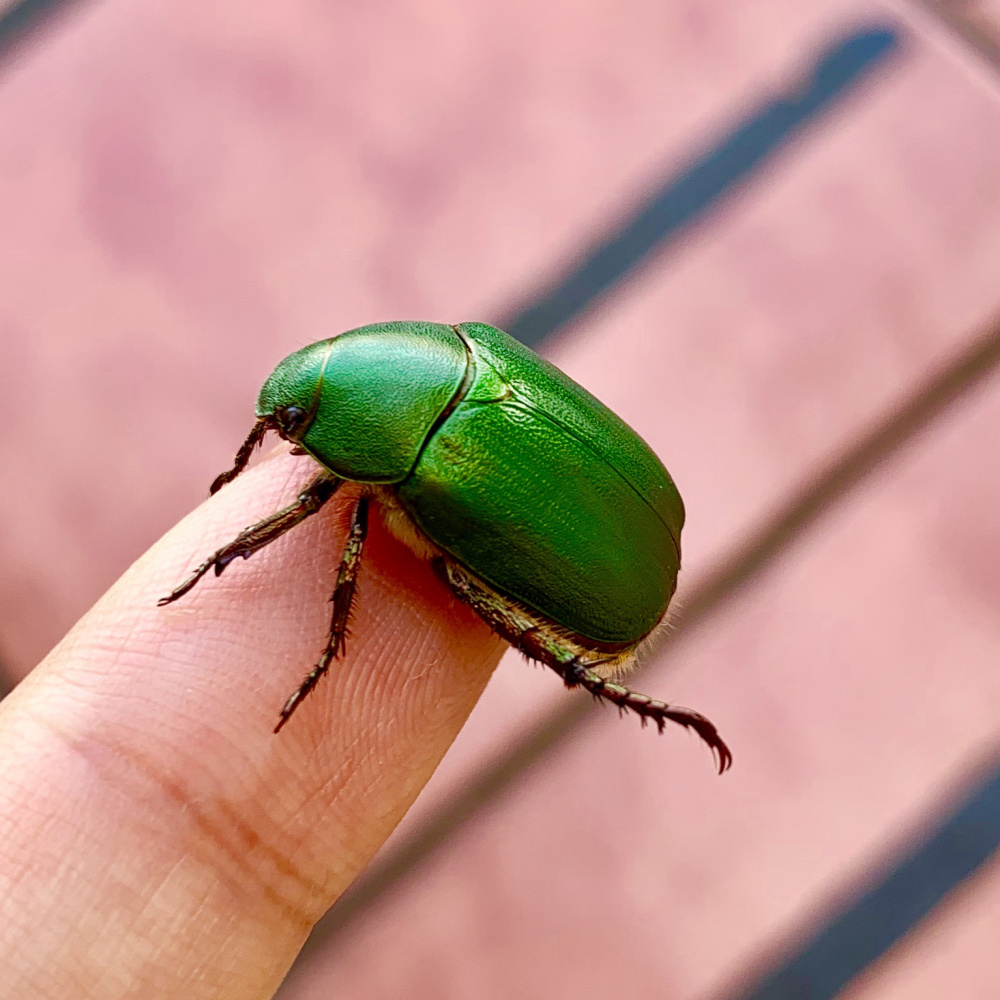 We did arm wrestling several times on the table. There was no way I could beat Syun, but I just wanted to try. And I lost, every time, but it was fun. I did pretty good on thumb wrestling though!

I told him I was camping with the other Agent. "Hey, not fair. I wanna go." Said Syun. "Wanna come?" "Yes!" -- I think our adventures will keep going. 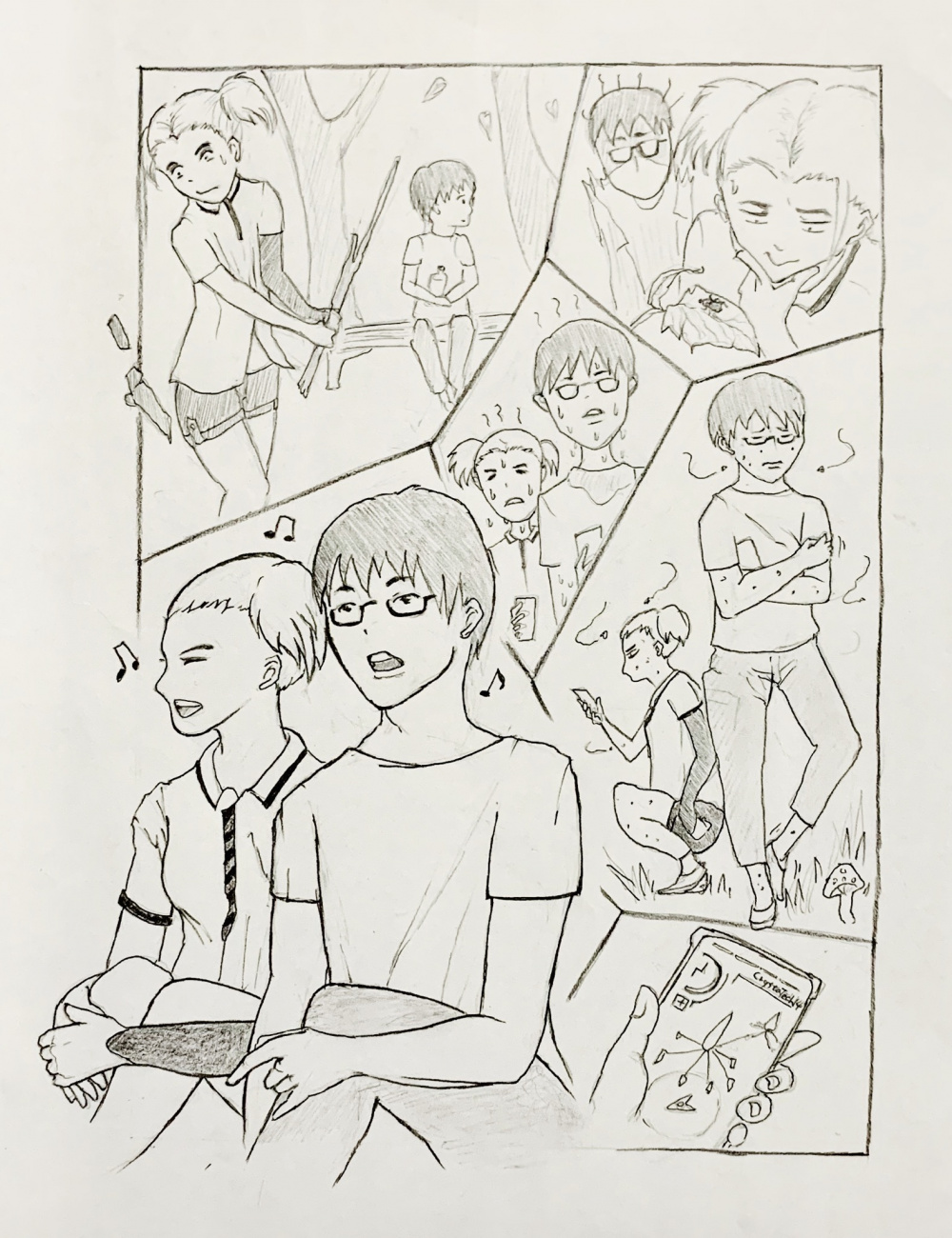 So many things passed in my mind when I was making the field, walking through the park, waiting for the rain to stop, and so on.

-- We had lost the creativity to find something to play with whatever available around when we got bored, as we grew up.

-- The most of them were lost but yet still we have a lot of nature in our neighborhood, but we were not aware of them.

-- The wind carries the scent of the nature, the sounds insects make, and the atmosphere that water makes.

There were things that always existing next to us when we were little.

We unintentionally had shut the most of them out from our senses as we grew up.

However, they have not disappeared from our world. They are still there. We are just not seeing them.

Since I started playing Ingress, like a Deja-Vu, such small discoveries again started to visit me. 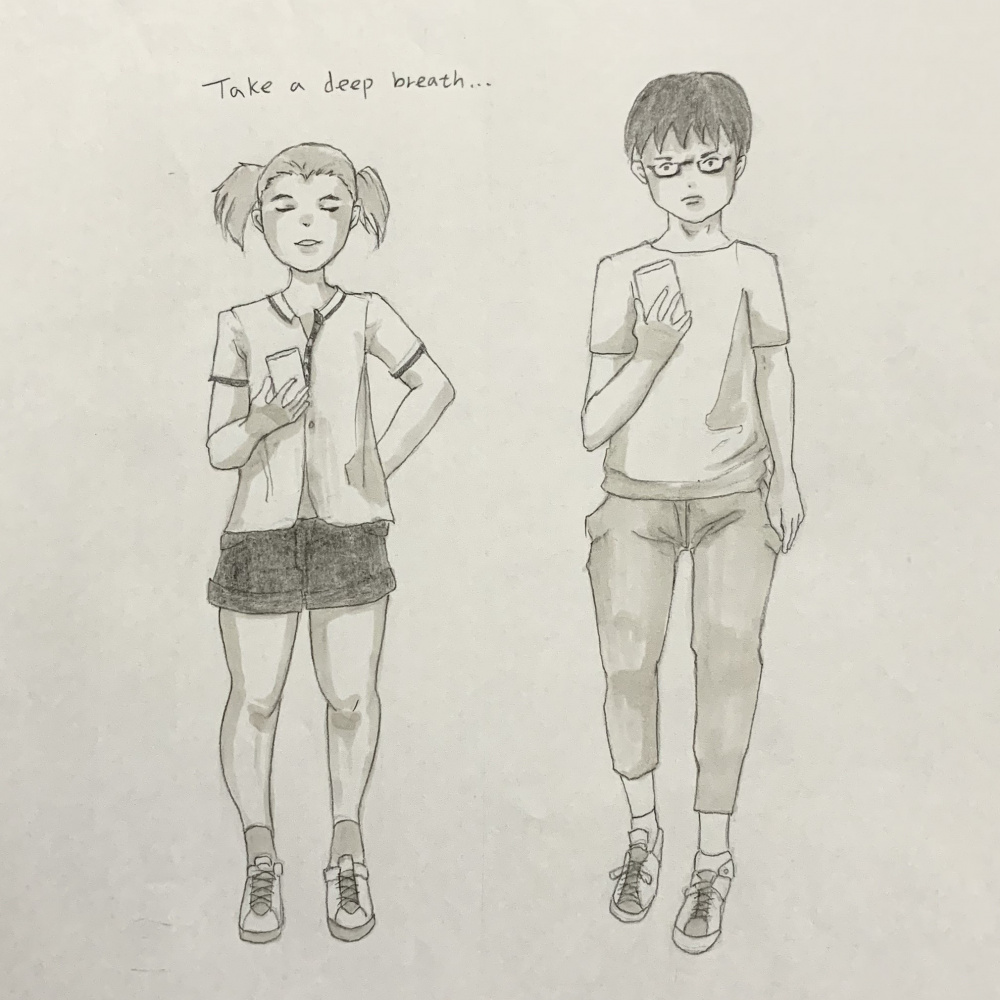 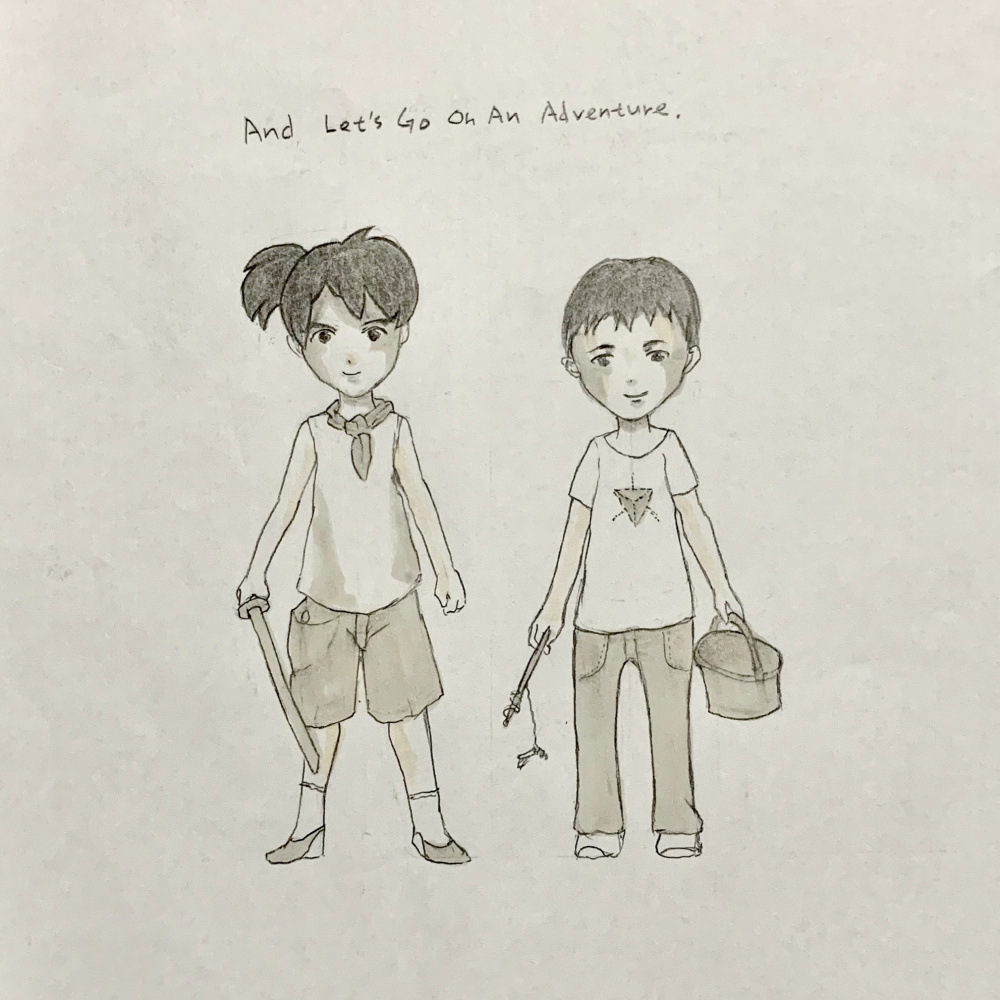