Today marks 1 month until Ingress Prime is the only client, and in my opinion there are several bugs that must be addressed before this happens.

I posted about some of the same concerns 1 month ago, here it is for reference: https://community.ingress.com/en/discussion/2817/ingress-prime-bugs-in-priority-order

For context, I play on an iPhone 8 Plus with the latest stable iOS (currently 12.4.1). I'm only looking at bugs and not feature parity. All bugs are present on Ingress Prime version 2.29.2-ecc17158.

Here they are in priority order:

1. Getting stuck on "Command Channel Open" while glyph hacking.

Despite the release notes for 2.27 claiming to have fixed this issue, it still occurs for me every day. It seemed like 2.29 might have reduced the frequency at which it occurs, but I'm often still getting stuck. It's (almost?) never on the first hack after restarting the client, but usually it takes several hacks before it starts getting stuck. Once it starts getting stuck it will almost always continue to get stuck on subsequent hacks, with the frequency of getting stuck and the duration of being stuck increasing as time goes on until the client is restarted.

Once stuck, the only way to get unstuck is to input commands or else just draw randomly every few seconds. Eventually (sometimes after 1+ minutes) the hack will proceed normally. If no further input is given after getting stuck, you will be stuck presumably until the end of time (have tested this out to several minutes).

This bug alone has wasted many hours of my time over the past few months, and time is your most valuable and limited resource when playing Ingress. This bug is well deserving of the #1 spot.

When linking, the view of the destination portal is often incorrect or takes a long time to load in the links and fields around the portal you're linking to. This often makes it difficult to know if you're linking to the right portal if you aren't 100% sure.

I've found if you don't have Ingress Prime on the screen when you are traveling at highway speeds, and then you switch to Prime once you arrive at your destination, you can get speedlocked as if you just teleported from wherever you used to be to your present location. This can cause a very long period of time where you are not allowed to do any actions, even while sitting completely still.

When this occurs switching to Redacted allows actions, but soon that workaround will no longer be possible.

4. Interactions are no longer triggered when pressing UI elements, instead triggering when the press is released

I'm treating this change, introduced in 2.27, as a bug because it seems to be causing issues throughout the app. This has quickly become a source of frustration when using Prime since the new UI update. Since now where your finger is when you release is important when it didn't used to be, additional precision is required. Here's some examples of areas impacted by this bug:

As I type this my three most recent medals are showing up as blank, despite reinstalling just a few days ago. Medals are often blank when I get the popup letting me know I earned a new medal, which was pretty disappointing as I like to screenshot my gold+ medals earned. So my onyx Recharger, platinum Trekker/Translator, and gold Myriad Hack medals were all just blank hexagons. My profile loads properly after reinstalling but it often looks like this: 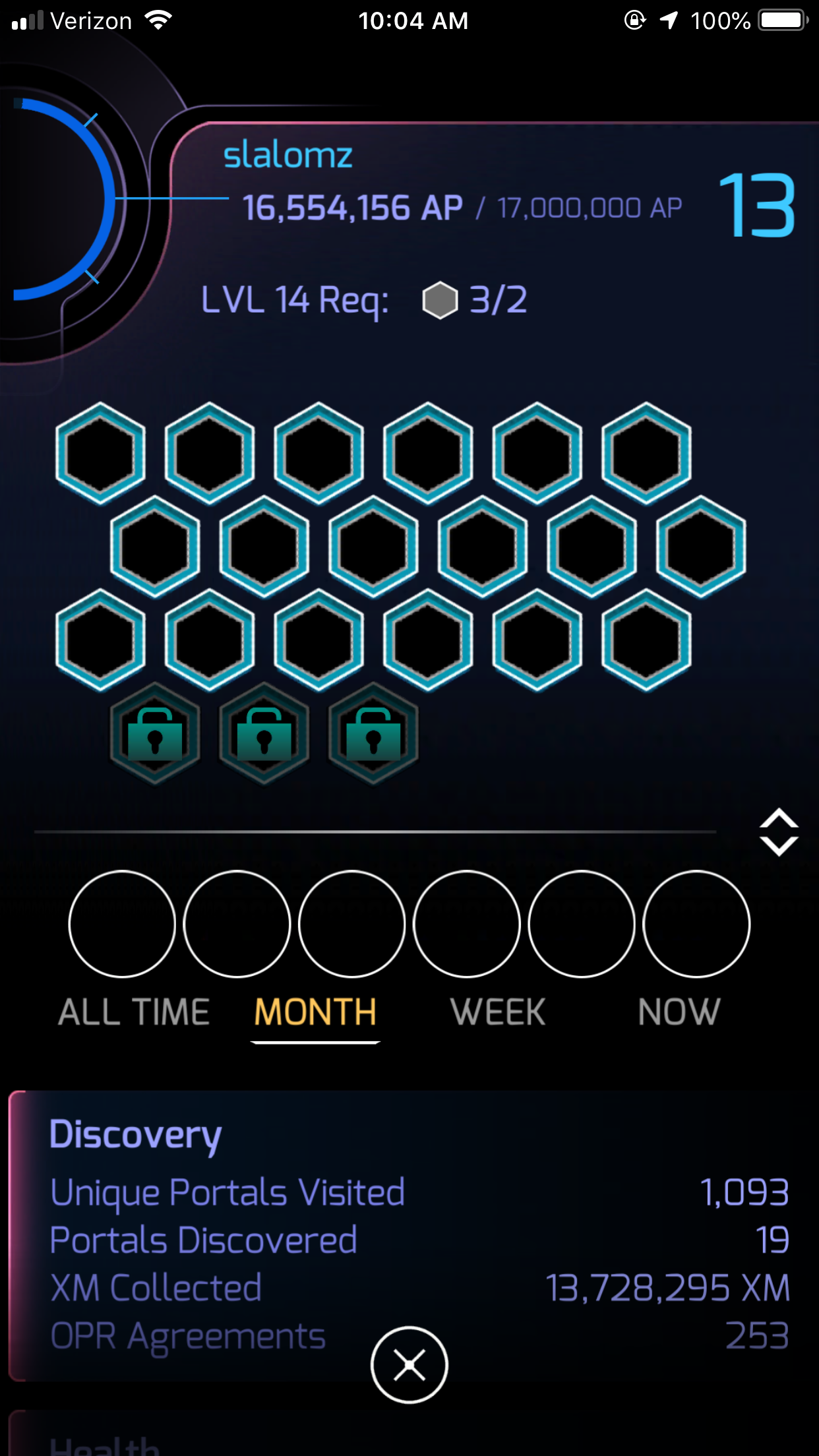 This is also a big problem with keys, as the images are a good way for me to quickly locate the correct key when I'm trying to find one in my inventory or in a key locker. But when some/all the images are blank it's pretty difficult.

Sometimes buttons disappear in the inventory menu. Notably the "Manage" button for key lockers and capsules will disappear, and the "Recycle" button within the mass-recycling mode for resonators/weapons/etc will disappear. I can get the "Recycle" button to reliably disappear by hacking a portal, then quickly going into inventory then mass-recycle mode around the same time that the box listing everything you got from hacking is displayed. To restore the button you must exit out of the inventory menu, tap to close the hack results box, then try again. But sometimes this bug occurs even without hack results on screen.