Unlike our other glyphs in the glyph challenges, this glyph has not entered our scanners at all in any other form other than Nemesis media. It however still fits the pattern of showing up in our scanners and storyline before its sequence release. There is a rather complex history with the name sake of this glyph, as Nemesis has been revealed to be involved in many universes but not a lot is known about the group and if this glyph itself will only represent the group. So, i decided to look into the glyphs composition! I was unable to do all of the glyphs composition in my field art but i took to paper and pen. 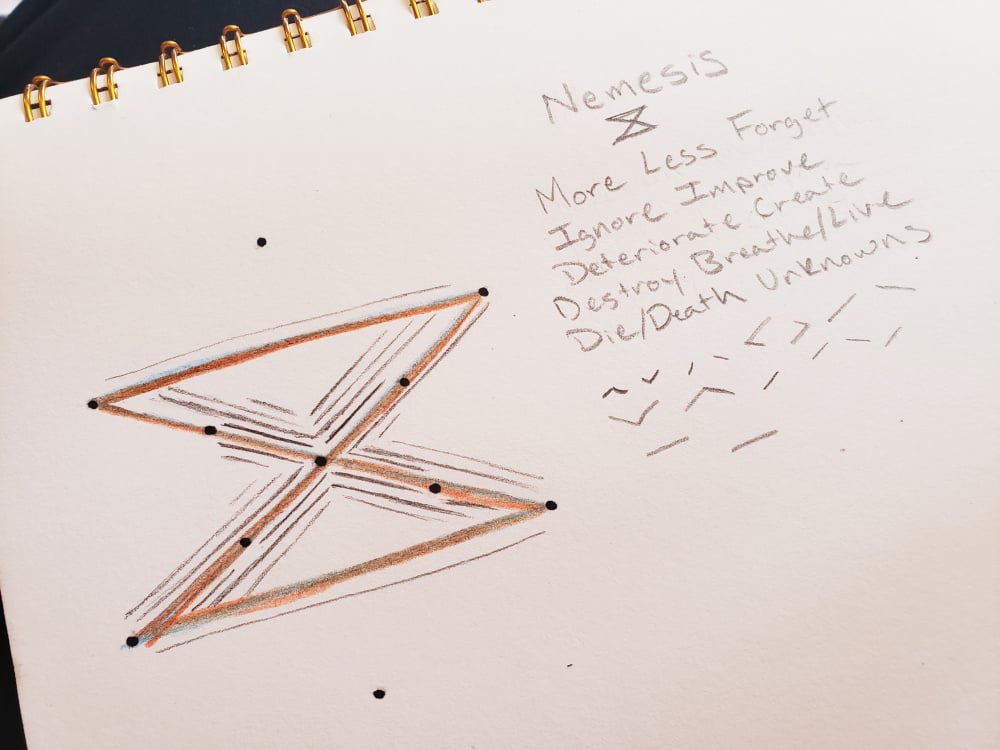 Nemesis Glyphs composition is made up of the glyphs More, Less, Forget, Ignore, Improve, Deteriorate, Create, Destroy, Breathe/Live, Die/****, and a few of the unnamed glyphs from the Ingress Anime. These are mostly all oppositional glyphs that i feel implicate the glyphs balance and how it can be looked at from either a negative perspective or positive one. This fits in with the name sake of the glyph, as the group Nemesis has stated what they are doing is for a good cause. Though this has not been explained, their actions have lead many to wonder if Nemesis is indeed a bad group or not.

While its unclear if the glyph and group our connected, there has been some indication that more new glyphs will possibly be coming. Like Toast, Nemesis is using the two top lines that only these two glyphs and the anime glyphs have used. Before the Anime, these lines were never used in our scanner or in other glyphs, so i have to wonder if we will be learning what these two lines represent and if future glyphs will use them as it seems we are definitely becoming more familiar with them. Will we be seeing the introduction of the Anime glyphs? Will the Nemesis group glyphs be introduced to our scanners? Only time will tell.

I believe that Nemesis may be starting a new sequence for us as its color is most certainly different and it doesnt seem to completely fit our previous sequence. I could be wrong, but we will have to see what the next glyph challenge looks like to fully see if Nemesis is part of the purple 1219 sequence or if its starting its own.

For those interested in the Glyph Challenge sequences, they are below.

Hopefully i will get more time to do a deeper analysis of the Nemesis glyph. These posts are just my thoughts and are not presented as the true facts behind this glyph.  As always i look forward to seeing your opinions and thoughts agents!