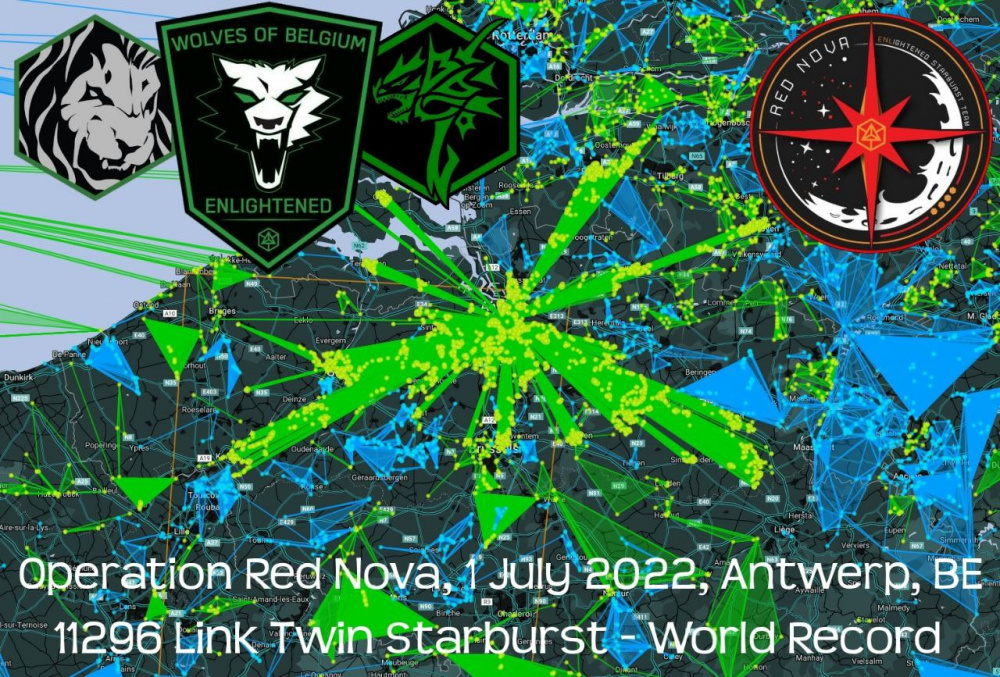 Once again we had a meteor shower brightening up the night skies, the June Bootids occur from june 26th to july 2nd.

The Wolves of Belgium could not let something that beautiful go by unnoticed so a new starburst was organized. The starburst was planned carefully and the keys were farmed by a small group who enjoyed the sights of the local outdoors museum Middelheim.  The core organization team mobilized the Wolves, the Lions (NL) and Dragons (North of France) and their operators and started making plans.  Since the Niantic servers kept crashing when the amount of links went too high, we decided to make a dual starburst to see if that went better.

We wouldn’t be the Wolves nor the Lions if we let that slide off course so on July 1st, like a phoenix rising out of its ashes, we went for it again. At the start we encountered a RES player at the starting portals so it seemed like the starburst was doomed before it even began.  But our Wolves playing together, like they have shown so many times before, overcame this initial obstacle and the starburst was on.  The Wolves and Lions were thirsty for those links and although RES initially put up stiff resistance, more and more links started pouring in, from droplets to a stream of links.  This year we got lucky and Niantic fed their hamsters enabling us to keep going, Ingress slowed down but did not crash! The end result was a total of 11.296 links (north portal 4.393 links & south portal 6.903 links).

Not only can we be proud of the 2nd run because it worked so beautifully, we can also be proud of our ENL players that they did not give up after the first setback and put in the tenacity in prepping a new starburst in only 2 weeks! it showed not only that we can starburst but that we are not separate communities but that in all us is a Wolf waiting to be unleashed!

The next day, as is the habit, ghost links were present but they disappeared much faster than normally.

Come join the Wolves for a next event and who knows, maybe next time we go for the WR not only one 1 portal but on 2! And be honest, isn’t it fun to be a bit crazy sometimes.

Some of our agents