Every month we highlight unique events that take place in the great state of Utah. Join us as we travel the state and visit some amazing events!

We had over 60 participants this month and we added a very special guest to our photo to celebrate the Platinum Jubilee of Her Majesty Queen Elizabeth II! Once again a good time was had by all and we're super excited to continue having virtual gatherings celebrating the Great State of Utah. 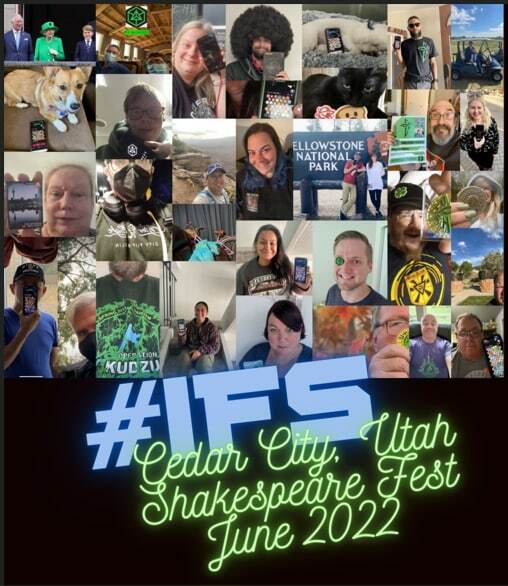 The Utah Shakespeare Festival is a theatrical festival that performs works by Shakespeare as their cornerstone. The Festival is held during the summer and fall on the campus of Southern Utah University in Cedar City, Utah, United States.

In 2001 it received the National Governors Association Award for Distinguished Service in the Arts for Artistic Productions.

The Festival produces an eight-show repertory season in the summer and fall of each year. Traditionally, four of the produced plays are written by Shakespeare or one of his contemporaries such as Christopher Marlowe, and the others are non-Shakespearean classics or works by more contemporary dramatists, one of which is usually a musical. The Shakespeare plays are usually performed in the outdoor Adams Shakespearean Theatre, which is modeled after Shakespeare's Globe Theatre. The other plays are performed on an indoor proscenium stage, the Randall L. Jones Theatre. The Auditorium Theatre is used for matinee performances of plays normally produced at night in the Adams, and as a rainstage for Adams performances.

During the summer The Greenshow is performed outside before the evening productions. The Greenshow often includes comedic skits, and musical routines with dancing. During and before the performance people dressed (roughly) in period clothing walk around the courtyard (green) selling programs, telling jokes, and offering a selection of treats.

The Festival was founded in 1961 and presented its first season in 1962. It is one of the oldest and largest Shakespearean festivals in North America.

The Festival is located in Cedar City, Utah, a community of approximately 28,000 people, and is within a day's drive of seven national parks and numerous national and state forests, monuments, and recreation areas.

The Festival employs thirty-two people year-round. The production company consists of approximately 250 individuals. Approximately six non-acting positions are needed in areas such as production, marketing, management, and administration to support each performer seen on stage. Over 200 additional community members donate their time to support Festival activities.