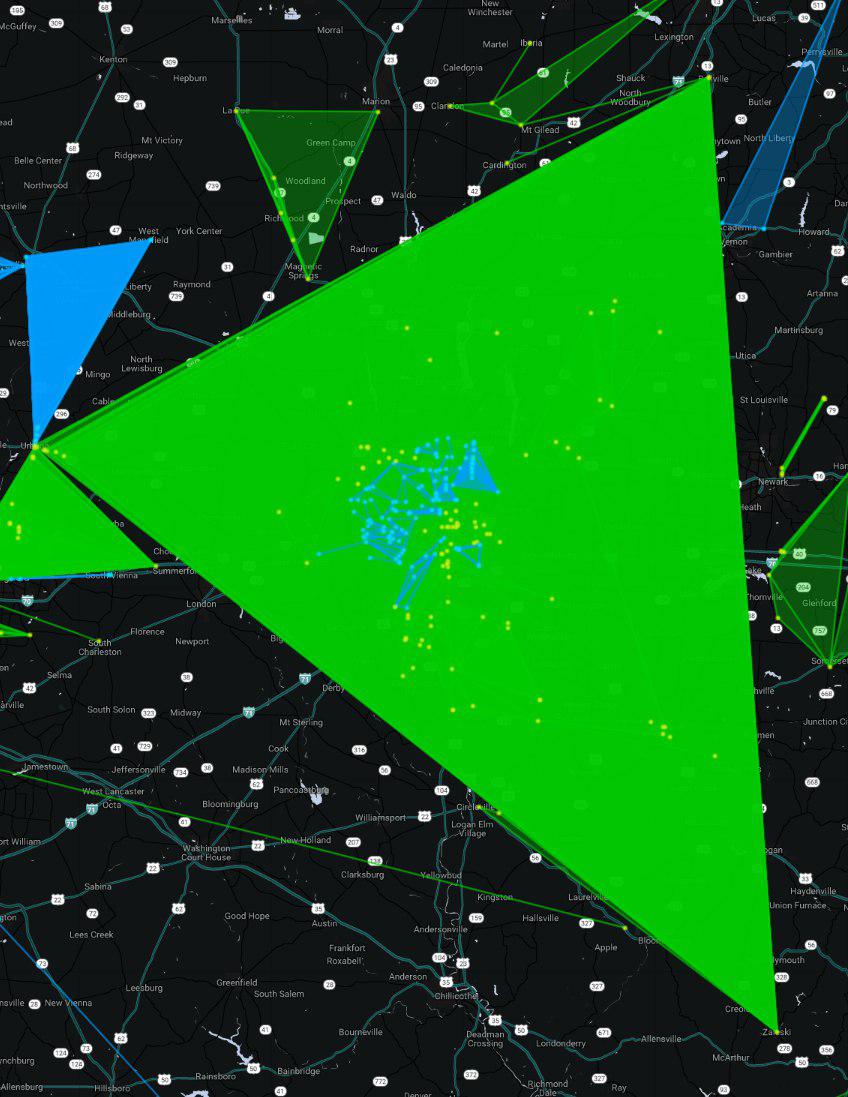 Hey all! Today was a fantastic day, and I have a great story to tell. One involving twelve big triangles, four illuminator badges and a total of over 10 million mind units!

Beforehand, the following agents were of critical importance: Phanzoid, Frosty5156, Drewsonian and Tim001Sim. Seriously, huge shoutouts to each of them for the jobs they did helping me keep control of the field. Without them, this never would have happened. Special thanks to Zabrolak as well, who was a great assistance to my operation plans and operating while I was on site, as I was in a cemetery with poor reception and my plans were refusing to load properly, so I could not fully direct the field from my placement.

On 6/23/19, multiple Columbus agents came together. With the goal of throwing some big doritos, we all set out to our targets. Agents Roerganger, Vrouwerganger, NorthAmerica123, ChibiOkami and Grutsy all set out to destroy blockers. Maggieoh, Davidoz, TemporalFlux and BigNose were all on standby in areas with known Smurf activity, and all agents got into their respected areas at 3:30. Dantrepor also valiantly sacrificed his couch portal with an ADA by walking outside for this op. Thanks to him as well! The throwing was to be done by myself, Ouoluj, KalisiCindee, Echo92 and MadKecleon. Special thanks to Lync512, who came out at the last minute and was able to fill in and throw a layer another unnamed agent did not make it to (I was informed a few hours in advance he "wanted to sleep in" LOL).

Throwing at our 4 PM checkpoint was, unfortunately, impossible. We began throwing at almost 3:50 at the dot. Our links from Mechanicsburg, our first Western layer, to Zaleski, our Southern layer were immediately established, and our links from Bellville, our Northern layer, to the South were all established. But unfortunately, a local smurf threw multiple blockers outside of one park ten minutes away from two agents in position nearby. This set us back to the initial layers being thrown at 4:16:22 PM, for the first four fields, thrown by agent KalisiCindee, after a valiant and fast paced fight performed by Byteme70 and assistance from Davidoz and Maggieoh, who threw local blockers to keep most of his links down. At this time, we showed a bit of our hand as well, and Ouoluj threw his Northern link, from Urbana (West of Mechanicsburg, anchor site #2). After this field was thrown, we quickly dispatched as many layers as possible. Ouoluj threw his two layers at 4:17 and 4:23 respectively, as he had to drive up the road to throw them. This very quickly put us at six layers. I was able to throw my first four from 4:24 PM to 4:29 PM, and ran three kilometers (roughly a mile and a half) to my next one, throwing my final, fifth layer at 4:44 PM. During this time, MadKecleon, who assisted by throwing the first two links from South to West, fought a local smurf who came by to take our local anchor. He held it until past 5 PM, and kept the field up for just under an hour. Echo92, who also threw the four main links from North to South, assisted by recharging with him. Huge thanks to them both as well!

After my final layer was thrown, we passed off to Lync512, who threw the final layer at 4:53 after clearing of the area we hadn't previously thought was possible. This clocked our final MU count in at 10,202,677 million Mind Units, and resulted in two onyxes, KalisiCindee's and mine, and two platinums, who belonged to Ouoluj and Lync512.

Huge thanks to everyone involved! This was my first big field operation, and I would definitely call four badges and just over 10 million mind units a success! This has been a fantastic day, and I could not have asked for a better team.