With the 20-meter portal limitation lifted in Nov 2021, ENL agents in my city made six collocated portals and built an HCF14 with three of them (https://community.ingress.com/en/discussion/18449/operation-teiaiagon-worlds-first-level-14-homogeneous-field-in-toronto-ontario). Inspired by their work, I discussed field formation on doubled portals with my teammate Agent ToPokeCa and looked into Agent 57Cell's tutorials. I then realized that perhaps the ENL op didn't make full use of the potential of their collocated portals, so I decided to beat them with my own design.

Regular HCFs involve tiers of fractal structures, and they get terribly complicated as they contain more and more tiers. Collocated HCFs however, duplicate layers exponentially using pairs of portals, so they can have an enormous number of layers while internal structures are surprisingly simple. It only took me a couple of hours to fully understand the mechanism and come up with an HCF16 design on the intel map, using 4 pairs of collocated portals as tier 1 and tier 2 structures. I actually found it a bit anticlimactic - 14 portals and 56 links, just about the complexity of an HCF4. I wanted something more challenging so I then added a mini splitter uniformly to each area and made it HCF17. Agent 57Cell proofread my plan and confirmed its homogeneity. When he asked if I had a spreadsheet, I decided not to ruin the fun with a too detailed plan, so I just hopped onto my bike with my drawn links on iitc and my intuition. 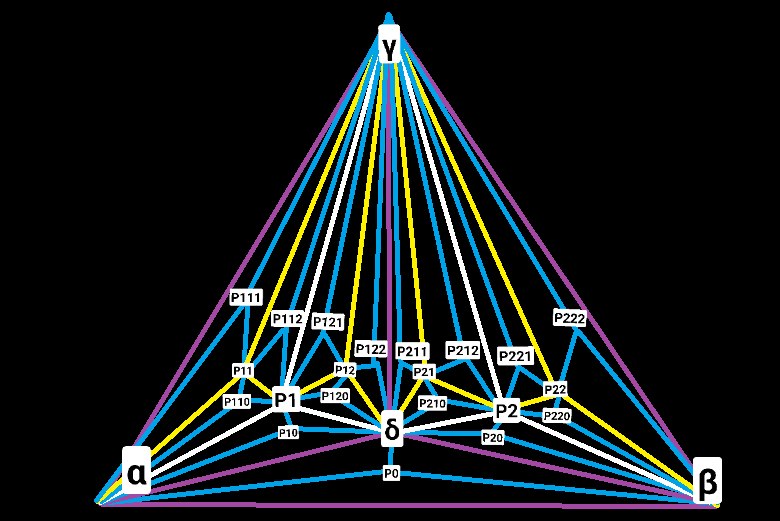 (A schematic of my HCF17 structure by Agent Lcfp. Quadruple links are in purple, double links are in white; yellow links are doubled when possible, blue links are always single under any circumstances.)

I started the first attempt at 12 am on Mar 26, 2022, with Agent 57Cell checking homogeneity on intel. It was a Friday night, and I was hoping that anyone with a life wouldn’t come out to interrupt me. My punishment for underestimating an op came earlier and harsher than expected. As I biked to the starting point, my paranoid brain thought that I forgot to set up auto-screenshot on my computer, so I had to find a helper on very short notice. Thankfully Agent whitevivid came to the rescue. During the op there were a couple of times when I didn’t collect enough keys or forgot about blockers, and had to bike back and forth for kilometers. I once linked two collocated portals to each other by mistake and had to flip one of them and waste a bunch of keys. I even made a wrong link on a portal I just flipped to clean blockers and had to adjust my plan on the fly. As I stumbled towards the closing vertex, I didn’t realize the biggest challenge was yet to come.

As I tried to close the field from P1 towards AB, I noticed that once the outermost P1AB field was made, anything within P1AB became unlinkable from P1’, except for B and B’ on the edge. Moreover, everything outside of P1AB was linkable to both P1 and P1’. This is theoretically impossible, so Agent57Cell and I double-checked the map but confirmed that P1 and P1’ indeed overlap with each other, and there were no blocking links. I then came to A to link back to P1, and found that A was linkable to both P1 and P1’, while A’ was said to be “under field”; I went back to P1, flipped both portals and exchanged them, but nothing changed except that the two portals exchanged behaviors. I stayed at a nearby Tim Hortons to wait for another hour, have my breakfast and warm my frozen fingers, and discussed some hypotheses with Agent 57Cell. Just before the cooldown ended, at 6 am an ENL captured the portal and refused to let me use it, so I pretended to have left the scene and returned to the portal a while later, and found that the order of capturing portals doesn’t affect their linkability. The ENL returned within three minutes, so I decided to retreat, as there were no more hypotheses to be tested, plus it would be impossible to do more experiments with such aggression.

Having heard about my situation, Agent ALHDLIOX from China recommended Agent Shooters42 from France, who later connected me to Agent Lcfp from Italy, Agent Machap from Japan and Agent Arweth from Czechia. During our discussion, Agent Lcfp noticed that the situation was very similar to what happened in the HCF12 operation in Japan. I contacted Agent tomomomomomo from the HCF12 ground team and confirmed that collocated portals sometimes can not be double fielded in a certain direction. Agent tomomomomomo suggested doing a preliminary field test before double fielding with a slightly larger included angle on any closing collocated portal in the designed direction, in order to confirm that every target portal falls in the linkable zone. After analyzing the layout of all 6 collocated portals, I decided to close my field on P2 which has a smaller included angle CP2A and hence has a better chance of passing the test. In the following week, P2 perfectly passed the test, and I underwent a 40M AP perfect recurse, hit A8 again and got my Comic Sans gold medal. 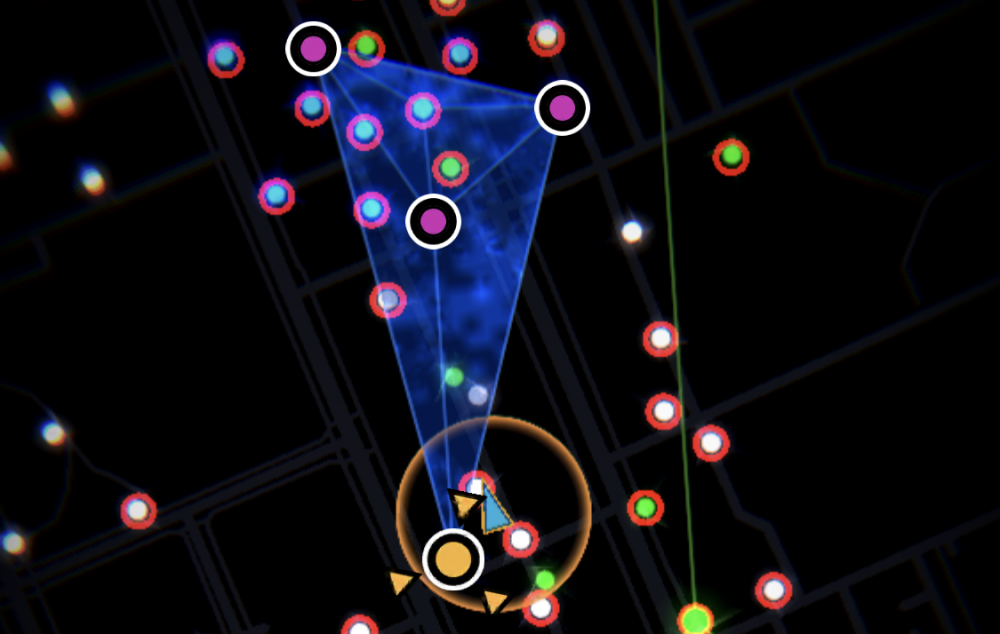 My second attempt started on April 2, with Agent Lcfp being the intel operator. Since it was again a Friday night, I delayed the op to 1 am to avoid ENL noticing my pattern. The first resonator was deployed at 1:07, the first link was established at 1:29, no mistakes were made and I got my bluetiful solo HCF17 at 3:48. This makes Toronto the common home base of the two HCFs that have the most and second most layers worldwide. To the best of my knowledge (and please correct me if I'm wrong), this is also the first time a collocated portal is introduced into the internal structure of an HCF.

(Video made by Agent PhalloidinHu.)

So how did the internal collocated portal increase field layers? Two hidden rules that we normally don't come across on single portals were found, thanks to Agent 57Cell's earlier experiments. Rule 1: Forming two potential fields on the same side of a link when you establish it normally gives you a bigger real field and a smaller ghost field; but if these two fields overlap with each other due to collocated portals, both would be real. Rule 2: A link forms two fields at most, overlapped or not; trying to get more than two by collocated portals or crossed links will give you none. 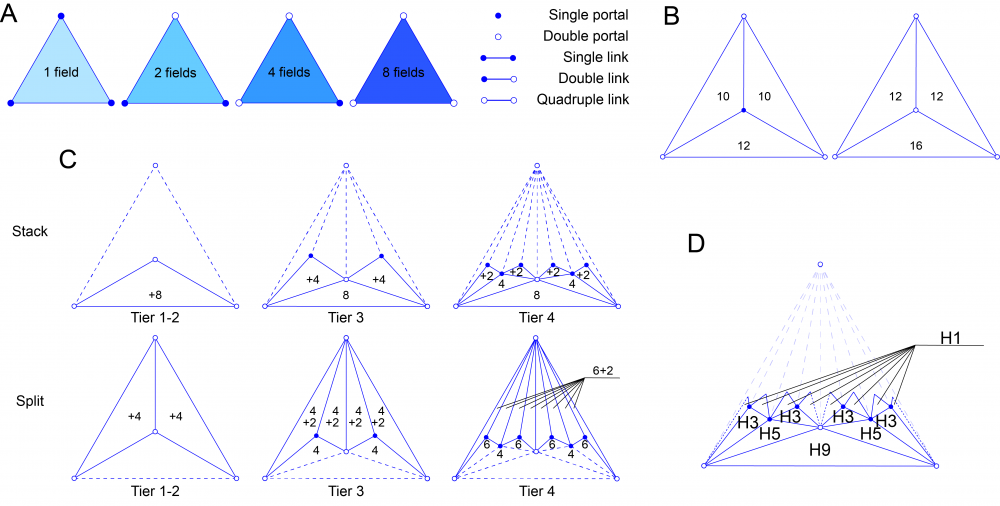 (The principles of field formation on collocated portals and the flow of designing an HCF17.)

Because of rule 1, in a simple field (A), it's totally possible to get 8 fields with 3 pairs of collocated portals with a little caution. However, things get a little tricky when there are internal structures. In the way we build regular nested fields, layers on the base and shoulders actually come from two different types of moves, stacking and splitting. In stacking, fields are formed as back-to-back simple fields. Therefore, wherever a vertex is doubled, the scenarios in A will apply. In splitting, however, fields are formed by links splitting a field, when rule 2 comes into effect. Since a link only forms two fields, one on each side when splitting, the number of layers only depends on the number of splitters, regardless of the status of the vertices. An example is given in B. Being very homogeneous in portals and links, fields on the shoulders are limited by double or quadruple splitters, and will always have fewer layers than the base. Ideally, 3 sets of collocated T1 and a single T2 will give 12 layers at the base and 10 layers on the shoulders, while duplicating the T2 as well will give 16 at the base and 12 on the shoulders. Add more internal structures to the areas with fewer fields until every area is covered by the same amount of fields (C), and we'll get an HCF16; an extra mini splitter in each area, and we'll get 17 (D). To make sure only one layer is added by these mini splitters, I had to be very careful and only link them to one of each pair of collocated portals, so I distinguished all collocated portals by a "main" and a "sub", and decided that mini splitters should always only link to main. To make sure no more than two fields could be formed by each splitter, despite fielding with a fielder's intuition, I also followed some special rules about orders: when closing a field on a collocated anchor, always establish main-main layer first, finish all splitting links in the main layer, then establish sub-sub, finish all splitting links in the sub layer, and finally link main-sub and sub-main; never close back-to-back HCFs together with their multiplied shared link.

Getting an HCF17 was not the end of my investigation. To determine whether unlinkable directions exist, the best way is to find out the unlinkable direction of a portal. I divided 360 degrees into quadrants around Portal P2, and to my surprise, it was linkable in all directions. I thought it was affected by the Matryoshka rule, as the target portals are all within 500m radius. A similar but more thorough experiment was done on P1, with ENL agent DucklingOLO and Sgt0608 helping me clean the links on the portal. Portal P1 was unlinkable east and southwards, Matryoshka or not; north and west portals were linkable, but only to the internal portals within a field, not at the edge of a field. It doesn't even take a field to block the southwards direction - a doubled link in the northeast direction will block everything in the south. With these data, we can conclude that unlinkable directions do exist, but only some "bad" collocated portals have them; links crossing might be the cause of unlinkable portals; the algorithm that decides linkability might be different for internal and edge portals. Agent 57Cell hypothesized that the endpoint of a link doesn't necessarily fall on the link due to rounding errors, and this could cause cross-linking problems for some collocated portals. The main takeaway for future HCF fielders is, do the double fielding test before your op. 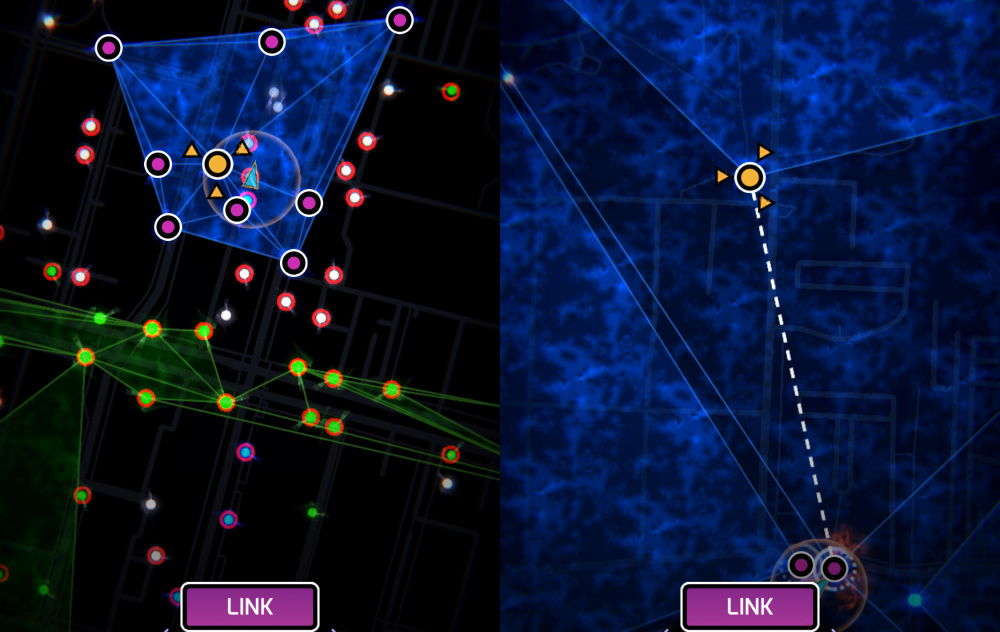 To bring this sitrep to an end, this operation never would have happened without the help of my very supportive comrades. It was a great pleasure working with so many people from different parts of the world, and thank you all for the knowledge, the advice, and the emotional support. Also, special thanks to my ENL collaborators and opponents. The competition between the two factions has inspired unprecedented progress in homogeneous fielding, and I'm sure 17 layers is not the end given there are still unused portals. But records are momentary. What really lasts is, together we have pushed the boundaries of agent knowledge, and our achievements are an asset to the entire community regardless of faction, just like these collocated portals.