How to solve the Pi Day 2022 passcode

There are multiple ways to try and decode this particular passcode, but we’ll share our decoding strategies to try and encourage more Agents to join decoding efforts and the Niantic Project investigation in the future. A thread: 🧵 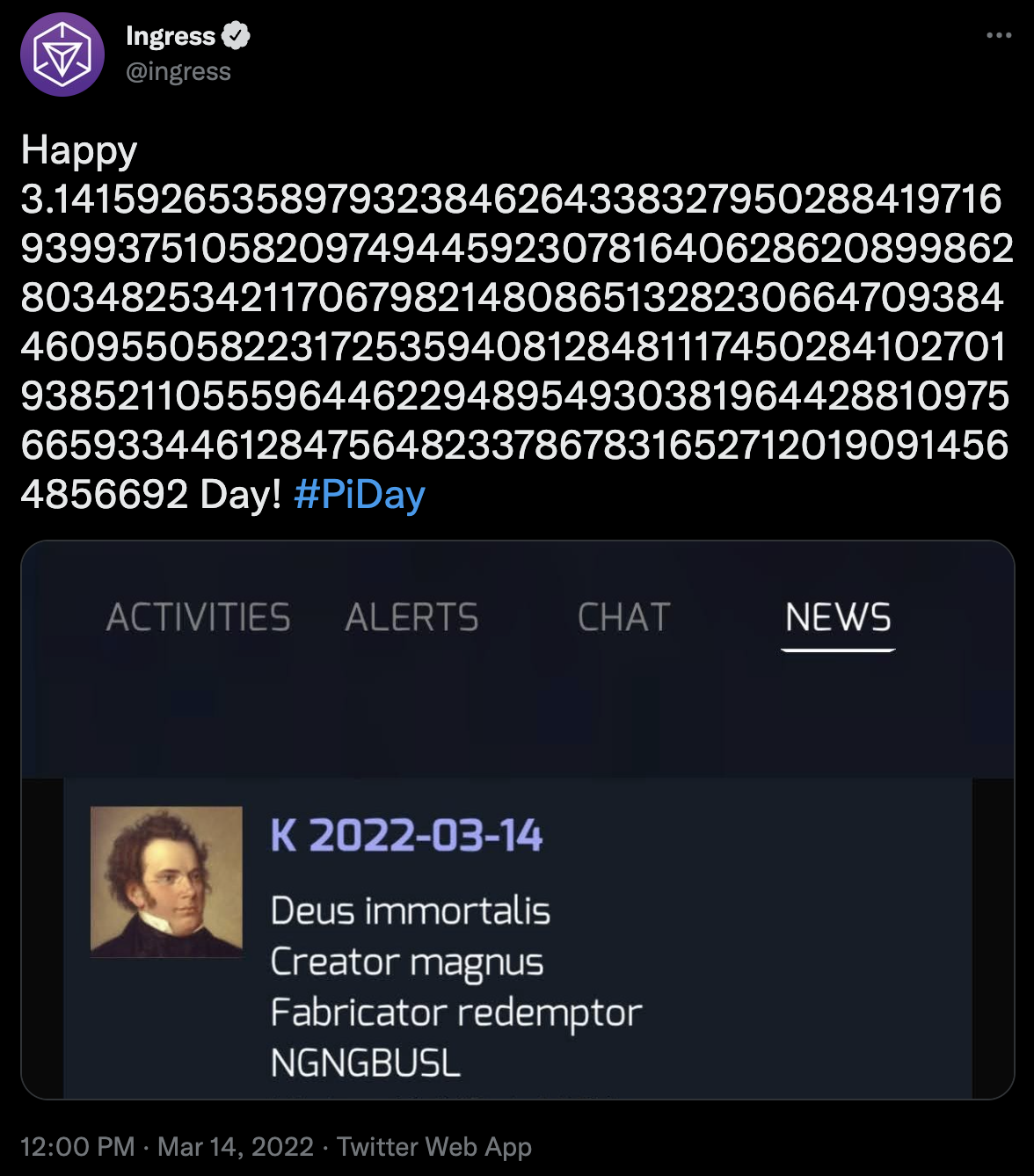 The big block of numbers in the tweet above is a clue. Yesterday (March 14 or 3/14) was Pi Day, as referenced by the #PiDay hashtag. In the Scanner app News Feed, there was additional hint text provided by K that says, “Hint: v=XpYGgtrMTYs.”

If you’re familiar with YouTube URLs, you may recognize this URL format. If you’re not, then the other tactic is to search for this exact text and see what your favorite search engine returns. In this case, Googling this returns a video as the top result: https://www.youtube.com/watch?v=XpYGgtrMTYs

“Ave Maria” was composed by Franz Schubert in 1825 as part of his Op. 52, and K has also included Schubert’s portrait as the thumbnail image of their News Feed post. Success! We seem to be on the right track. Ok, it’s a beautiful song, but what the heck does it mean?

Let’s move onto K's News Feed text, which looks like a strange poem:

“The mission of 13MAGNUS is to monitor the effects of Mind Hacking. Obviously, this will be done with the highest of security to make sure that the ideas do not contaminate or threaten humanity. This all leads to Niantic." https://youtu.be/92rYjlxqypM?t=33

A red herring. In this case, 13MAGNUS isn’t important to the solution and is just one of those strange, unexplainable Ingress coincidences. Eagle eyed Agents may have picked up on the poem’s structure and recognized a pattern. But if not, Google is your friend.

Searching “ave maria decode” returns relevant search results that should point you to something called an Ave Maria cipher, with the first result being a link to a decoding tool you can use to decrypt the hidden message: https://www.dcode.fr/trithemius-ave-maria

After entering the poem from K into dCode, the tool returns the Latin translation: ALBERT. Who is Albert, and what does he have to do with Pi Day? Googling “albert pi day” returns the following: "Albert Einstein's birthday is on March 14 — 3/14 — which is celebrated as Pi Day."

At this point, many Agents attempted to enter ALBERTNGNGBUSL into the passcode field. That’s not a bad guess, but unfortunately K didn’t make this passcode as easy as pie. Sorry.

In Ingress, some commonly-used ciphers to encode passcodes are Caesar cipher, ROT-13, Binary Code, Base64 Coding, and the Vigenère cipher. Our recommendation is to start with these before moving onto trying other ciphers.

Recall the original @ingress tweet above with the big block of numbers? Let’s try using the keyphrases PIDAY, PI DAY, and PI. And bingo was his name-o! We have a match using keyphrase PI, which returns YYYYMMDD. https://twitter.com/ingress/status/1503431008581931010

So, to recap, we now have ALBERTYYYYMMDD from K. ALBERT20220314 isn’t a valid passcode so what other date should we try instead? What was it that our “albert pi day” Google search returned, again? “Albert Einstein's birthday is on March 14 — 3/14 — which is celebrated as Pi Day.”

We hope this has been helpful, and if you haven’t yet redeemed this passcode then you better hurry. It’s time to move. Good luck.