Agents for Ukraine - Raising $9500 for charity

Like many others, agents were devastated by the news of the invasion in Ukraine and wanted to show their support to the people and agents there. The idea of a charity campaign came up quite spontaneously after I looked at my pile of badges that I still had left over from the NL-1331 and the Dronenet kit, and I wondered how much money people would donate for them.

I had previously tinkered around with Tiltify, a platform on which you can organize your own charity campaign with all the money going directly to the charity (meaning the organizers never even get their hands on it) and on which you can add incentives, like rewards for donating X amount of money. I put up the badges I had for $10 each. 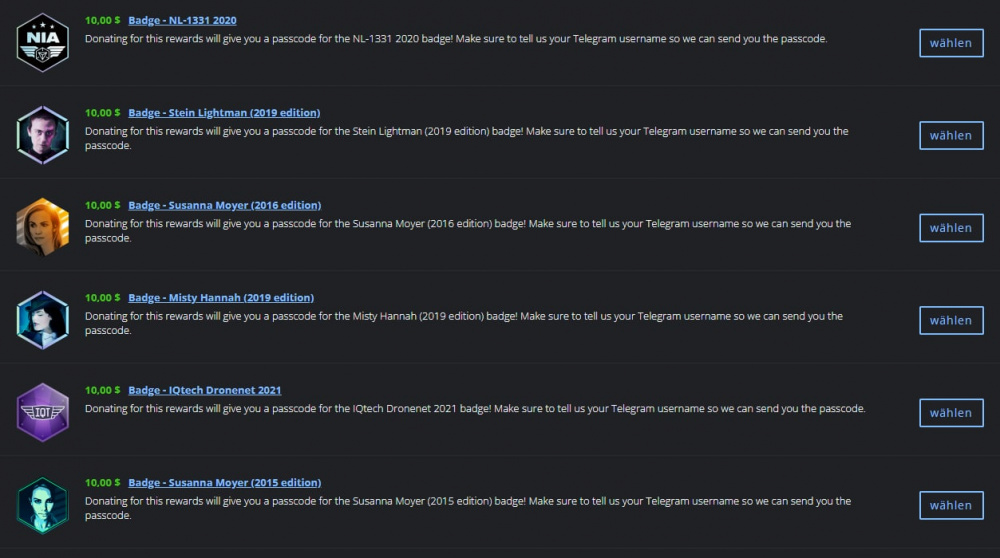 I then started to slowly share the link to the Telegram channel and discussion group as a kind of controlled test, just in case something went wrong with the site or if I had forgotten something. After sharing the donation link within the group, it became clear very quickly that the original donation goal of $250 that I had set was too low. 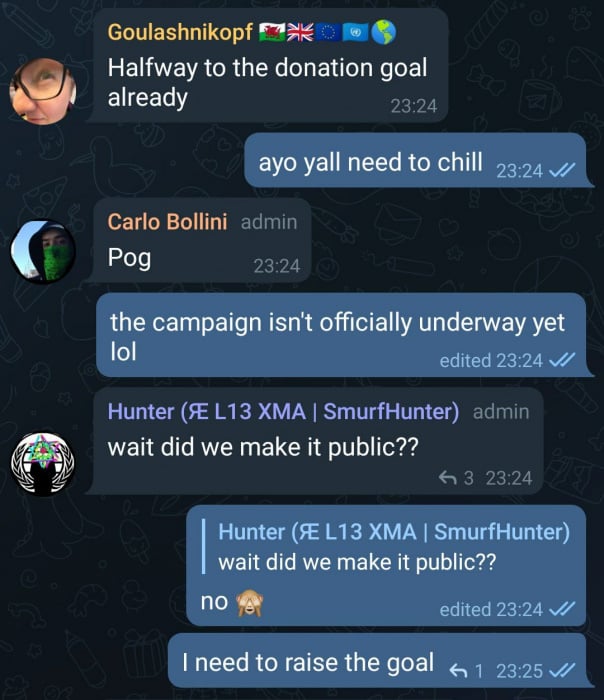 I also discovered that you can hold polls that you can vote in with your donation. Being 100% original, I decided on a poll that everyone will surely have no strong feelings about.

After about a day, I felt pretty confident that everything was going as planned, so I asked my friends at IUENG for a post about the campaign so the word can be spread. About 3 minutes after the post went live, we hit our second goal of $750.

In the meantime, I was in contact with the amazing @NianticThia with the goal of getting some passcodes for the event as well. While she understandably couldn't promise me anything, she did assure me that a passcode for every single person that donated would be possible, giving agents another incentive to donate.

After IUENG posted about the campaign, people started pouring in and donating their own passcodes and Swag to put up as rewards for the event. In addition to people actively donating and me trying to send out codes ASAP, it took exactly 47 minutes until I messed up for the first time and lost track of the people that donated. 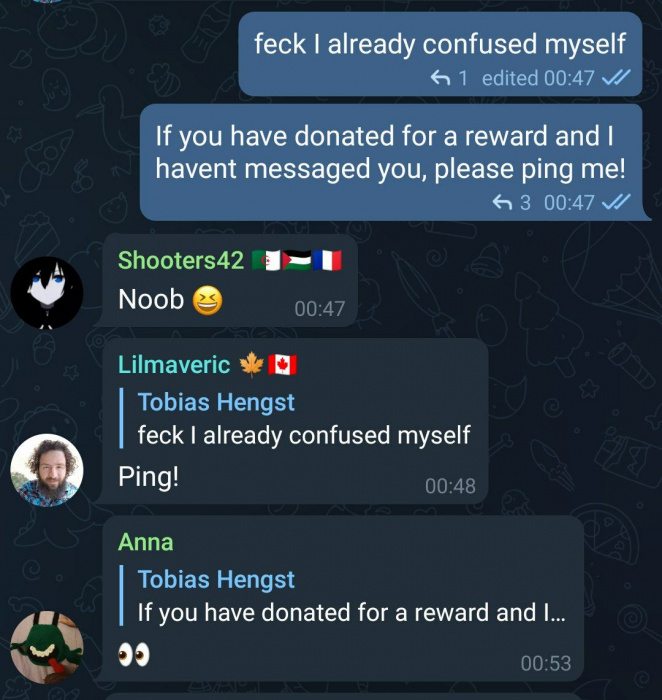 One and a half hours after the campaign was made public, we were at ~$1200.

The next day, I woke up to the goal being, once again, smashed with over $1600 in donations and a very nice message from Thia in my inbox. She got a hold of the Swag team, and they generously donated 40 Glider Gloves (20 for each faction) and 12 NL-1331 Engineers shirts, which were only sold for a very short time in the old Ingress online store. 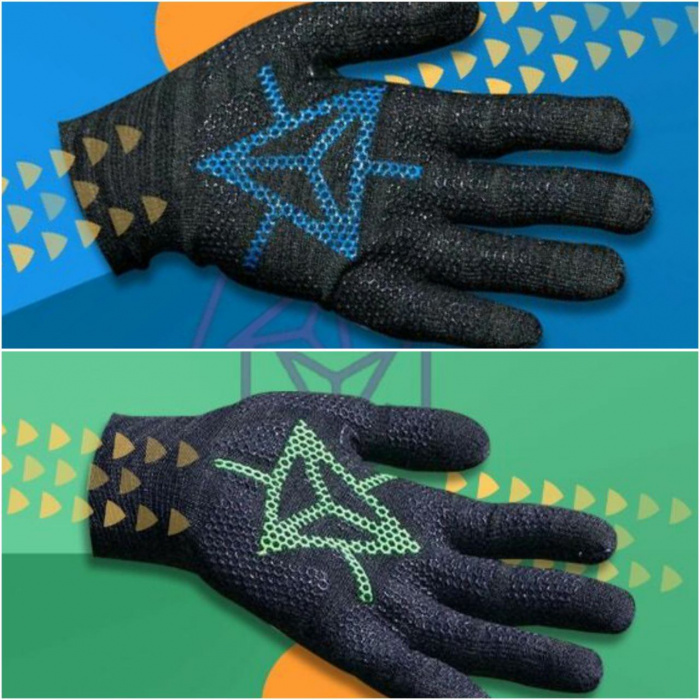 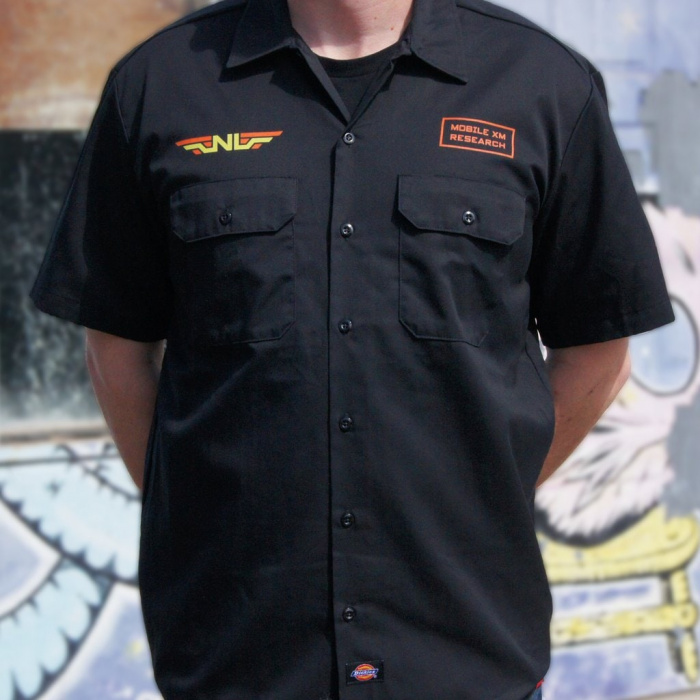 (Psst, hey Niantic, if you could make those shirts available again, I'd 100% buy them)

I started to put up the reward that other agents had generously donated, which were all to be unlocked at the same time. 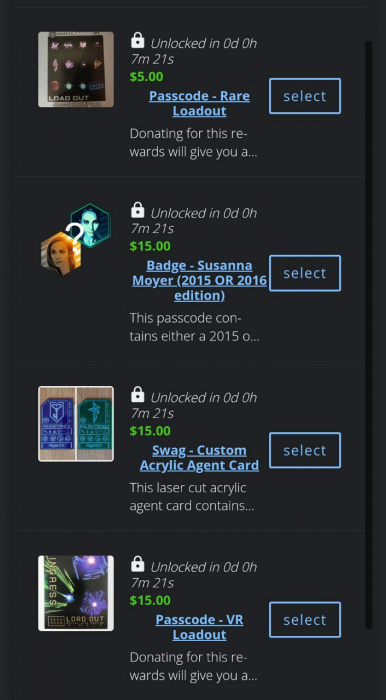 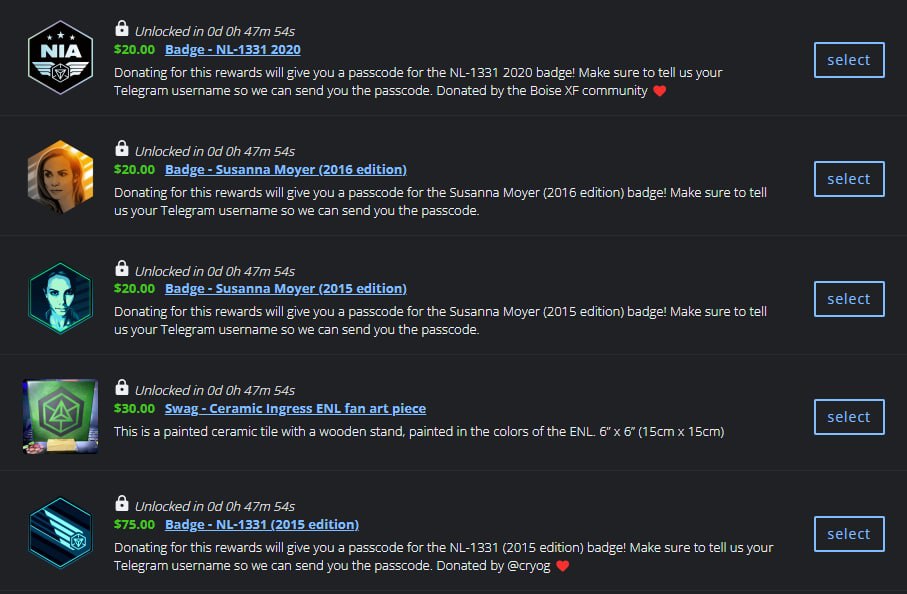 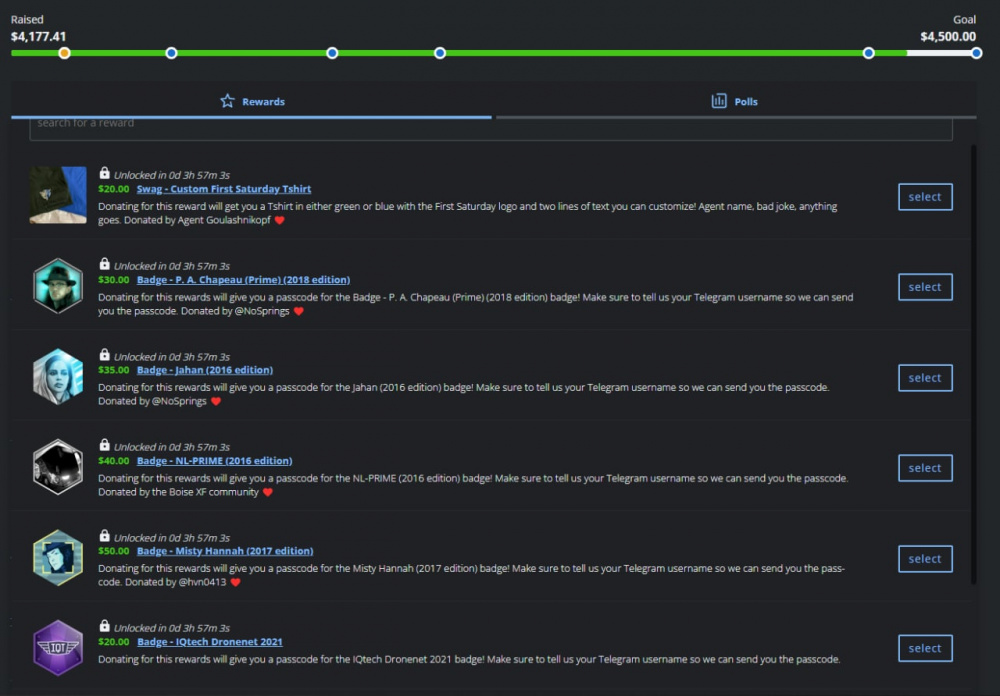 At that point, I have also slowly increased the amount needed to qualify for badges and upped the goal to $4500 (which was also shattered almost immediately).

As the days went on, I received messages from agents donating codes and Swag, and I messaged people ASAP to get them their code or Swag. 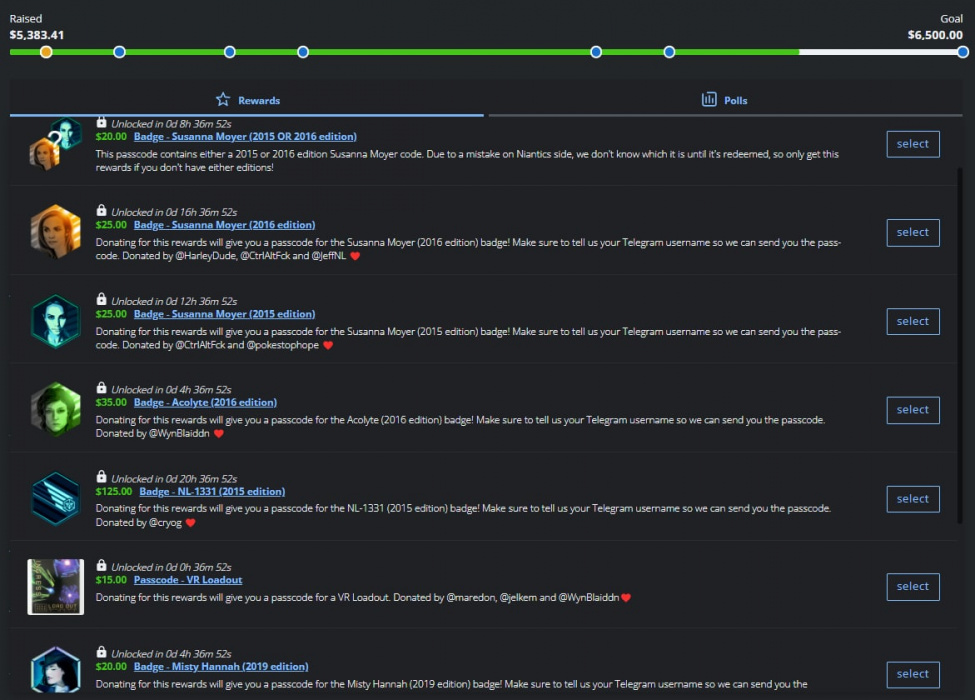 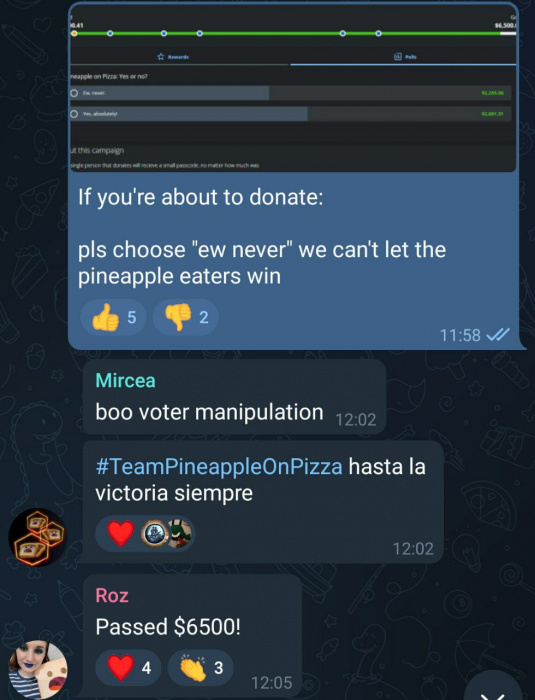 After a few days, the campaign slowly started to slow down with all the rewards being gone, and the group became quiet. That is, until I received another message from Thia in my inbox. 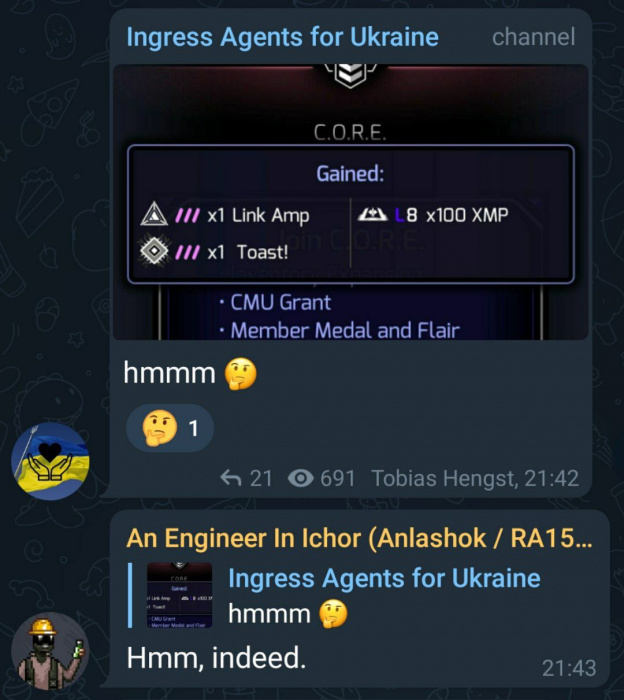 Niantic once again was amazing and donated 25 codes, each containing one Toast Beacon, 100 L8 XMPs and most importantly:

This revived the group once again, and I once again received passcodes and Swag for one final round of rewards, the Grand Finale of the campaign. The goal was bumped to $8500 (later to $9000), and the rewards were set to unlock every 6 hours to give everyone around the world a chance to get them. 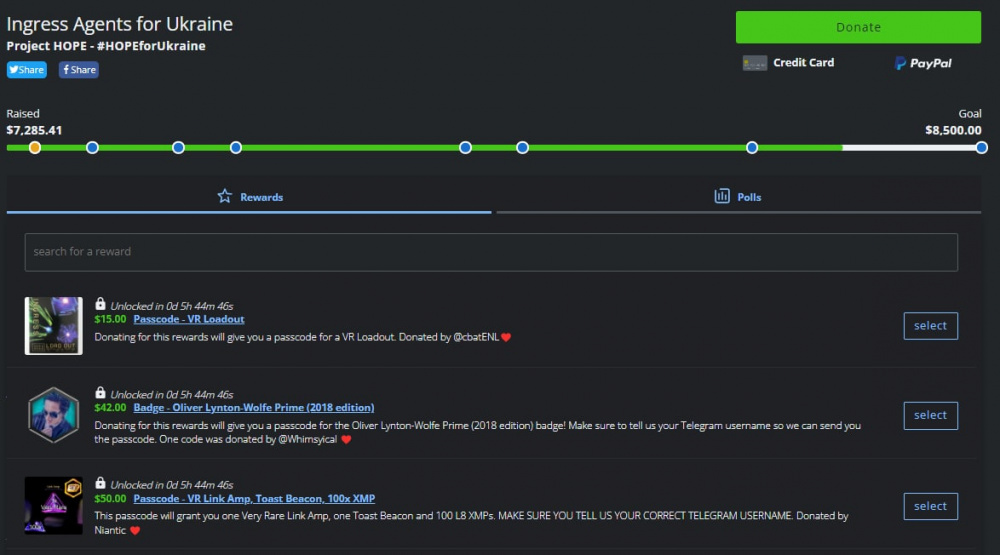 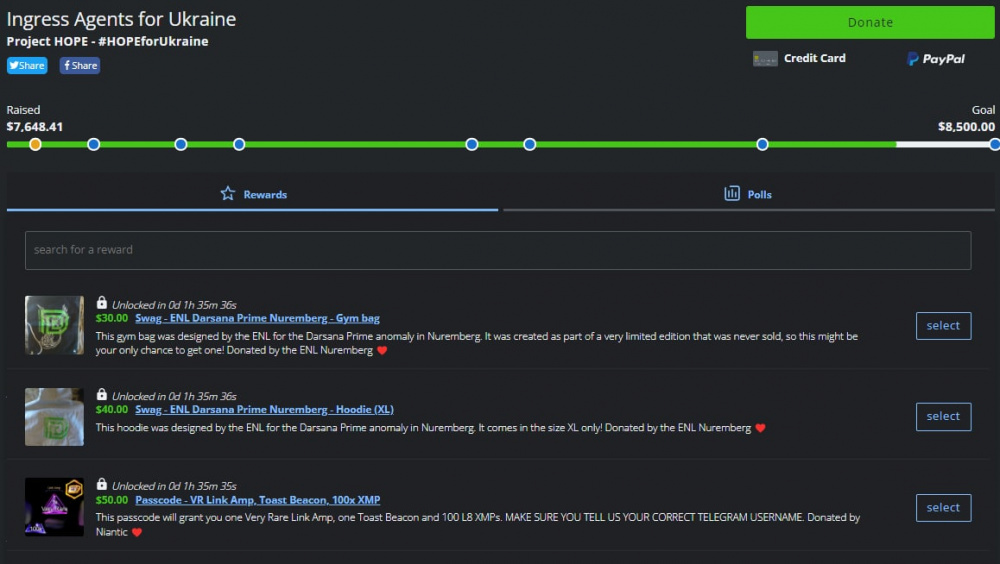 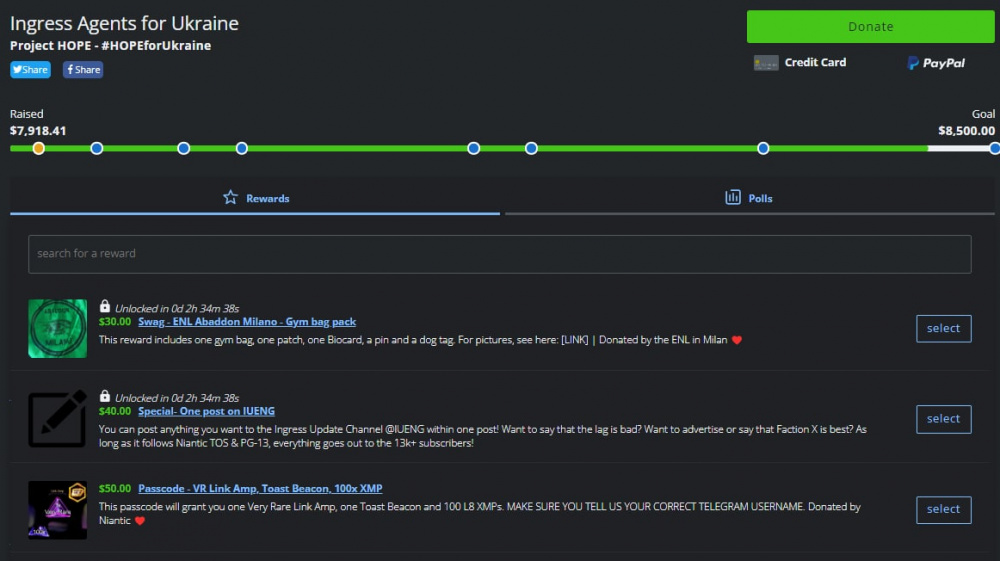 In the end, we closed out the campaign at an astonishing $9,500,62 raised for Project HOPE and their humanitarian mission in the current Ukraine crisis. This is 38 times the original goal I envisioned, and endlessly more then I ever expected

Thank you all so much for donating, giving us some of your codes or Swag as rewards and for sharing this campaign.

A special thanks need to go out to the folks at IUENG, without which this campaign probably would have never taken off, and to Thia, the amazing Community Manager for Ingress, and Niantic, who have organised the Glider Gloves, NL-1331 shirts, VR Link Amp codes and the passcodes for everyone that donated.

Seriously, from the bottom of my heart, thank you all so much.

- The ENL Glider Gloves were immensely more popular then the RES ones, with the RES ones taking almost 7 times longer to "sell out"

- According to the people, Pineapple on Pizza is something that is absolutely needed (smh pay-to-win poll I swear)

- The highest donation is a 4-way tie, with 4 agents each donating an astonishing $200

- At least 24 people have donated rewards for the campaign (likely a few more, but I lost count)

- I had three calls with Thia, which led to my social anxiety and insecurity about my English pronunciations to flare up three times