My drone was returned to me this evening from a portal. Initially I assumed it was because of Enlightened attack on the portal as several resonators were destroyed - but the portal my drone was on remained (barely) under Resistance control - it did not become neutral:

This is what was reported in comms:

As you can see, several resonators were destroyed at the time my drone was returned. 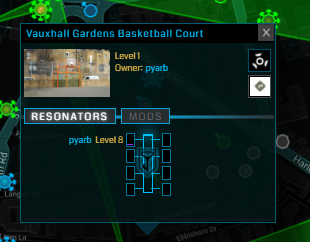 But this is the current state of the portal - still (just) with a blue resonator on it.

I have checked through comms - no actions have occurred on this portal since my drone has returned to me - so there was no blue capture and further damage to the portal.

This is a link to the portal: Ingress Intel Map

Because I did not initially see the "drone returned" message, I initially thought I had been lucky and tried to jump the drone to a neighbouring portal. I got an out of range error message.

This morning the portal shows as neutral, and the timestamp indicates this happened at the time it was attacked by the ENL agents.

Sooooo - there was still a bug, but the bug is that the portal did not update to intel as destroyed, even hours after the event. A number of people have mentioned to me that they have experienced "zombie portals" that got stuck almost destroyed and no amount of XMPs would finish the job. Given this I would speculate that the portal also appeared blue in the scanner, but I could not observe this as my drone was a couple hundred km away from me.

I have updated the subject of this bug report to reflect what I now believe happened.