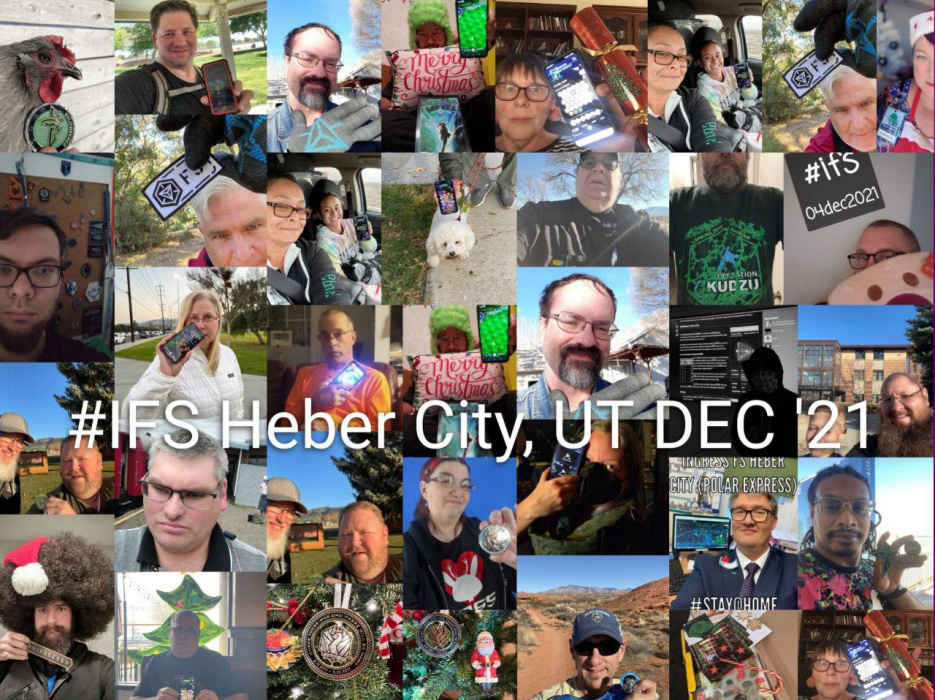 We took a Virtual First Saturday ride on the Polar Express this December!

For December, we visited the Heber Valley Railroad – https://www.hebervalleyrr.org/ – in Heber City.

Every year, during the Christmas season, the Heber Valley Railroad offers a "Polar Express" style ride on an historic steam locomotive to help children and adults alike get into the holiday spirit.

A family favorite, this 90 minute round trip to the North Pole includes hot cocoa and Mrs. Claus' famous chocolate chip cookies. You'll sing along to new and traditional Christmas favorites on the way and be entertained by our hosts, elves and cocoa chefs.

When we reach the North Pole Santa will join us for the return trip and greet each child and present them with a special gift.

"North Pole" (regular class) and "First Class" tickets are available for all trains. You can also rent our Red Caboose for your private group or family (capacity 10-12), or the elegant Luxury No. 100 Business Car (capacity 16). This year we have the beautiful 801 Luxury Car available - a restored 1930 coach. You can also purchase tickets for a table of 4 in the wonderful Luxury No. 850 Table/lounge Car (capacity 11 tables - 44). Your whole family will have a great time on the North Pole Express!

The History of the Railroad in the Heber Valley

For those living and working in the Heber Valley during the late 1800’s, the Provo Canyon Toll Road was the only way to ship to market the hay, sheep, cattle, and dairy products produced by area ranchers. Likewise, it was the only way citizens in the community could travel to Provo and Salt Lake City to shop, purchase goods, or attend cultural, social, and religious activities. Primitive by today’s standards, the road required a three day journey to traverse in good weather, and the trip could take longer in winter when snow slides often blocked the route.

The thought of building a railroad into the valley was put forth as early as the 1850s, when Provo Canyon was surveyed as a possible route for the Transcontinental Railroad (an alternate path through Weber Canyon was eventually chosen). Also, the Utah Midland Railroad, which was to have been a subsidiary of the mighty Colorado Midland, had included Heber in its expansion plans, but like many early railroad schemes this one was never built.

Undaunted, the citizens of Heber city pushed to have a railroad built into their community, and in the spring of 1896 the Denver & Rio Grande Western Railway (reorganized in 1899 as the Rio Grand Western) began surveying a route through Provo Canyon over the objections of the Telluride Power Transmission Company, which had plans to build an 85-foot high dam and reservoir within the canyon to feed its new power plant. Several court trials followed, but the case was eventually won by Rio Grande Western. As a result, a railroad would soon link Heber to the world.

Track gangs went to work grading the line up Provo Canyon on March 20, 1899 as soon as the winter snows had melted to a point that they could clear-cut the right-of-way. The first lengths of 52-pound rail (surplus from the old D&RGWR main line) were spiked down a little more than one month later on April 24th.

Much of the construction was done under the auspices of the Utah Eastern Railway, a subsidiary company of the Rio Grande Western that had been established in 1897 to build from Heber north over Wolf Creek and Duchene Pass, with a branch line to Park City, then east into Colorado. This line, which would have connected to the Rio Grande Western branch line into Heber, was never constructed, and in its short lifetime the Utah Eastern’s only project was the financial backing for the construction of the RGW’s Provo Canyon Branch.

Amid great fanfare the first Rio Grande Western train arrived in Heber on September 21, 1899. A traditional “last spike” ceremony was held at the brand new Heber depot, a one story wood erected on land donated by members of the community. With nearly the entire population of the Heber Valley in attendance, the Mayor of Heber, Abraham Hatch, and the Mayor of Provo, L.O. Taft, together drove the final spike to complete the railroad. Celebrations lasted throughout the weekend.

Regular train service between Provo and Heber was inaugurated in October 1899. Rio Grande Western trains that ran over the Provo Canyon Branch were established as mixed trains, that is they carried both passengers and freight cars together to save the expense of running two separate trains. The schedule called for Train #51 to leave Heber at 6:40 AM and arrive in Provo at 8:20 AM. After picking up and setting out cars there, it became Train #52, departing Provo at 9:30 AM and arriving back in Heber at 11:10 in the morning. A similar train, #53/54, worked the branch in the afternoon hours, departing Heber at 2:20 PM and returning at 8:05 PM. Several stops were made each way during the trip to replenish the locomotives water supply, which was used up quickly during the 27-mile run. The train was quickly dubbed the “Heber Creeper” by area residents.

This raises a question that has been asked countless times over the years: why the “Heber Creeper” nickname? A brochure published in 1972 by the Wasatch Mountain Railway gave the following explanation: No one is certain just when the term “Heber Creeper” came into use, but the legend is that the narrow twisting canyon made the trip so slow people began to talk of the train just “creeping.” From “creeping” to the Heber Creeper was a logical step, and it is known by this name to this day.

Today, the railroad is operated much like the typical short line railways that could be seen in many parts of the Utah and all over rural America during the “Golden Years” of U.S. railroading, approximately 1920-1950. As such, the Heber Valley Railroad attempts to preserve a slice of Americana that has otherwise disappeared. The train ride and atmosphere of the railroad equipment, yard, and building will hopefully recall a bygone era. For many passengers this will be the first time they have ridden a train. For others, a ride aboard the Heber Valley’s coal-heated coach cars and antique cabooses will bring back pleasant memories of days long ago.