September 21. The same @mamucLV looks at the map and comes up with an evil plan - during the FS, which will take place on October 2 from 19:00 to 21:00, to create some blue Fields over Riga. Anchors are selected and start searching for keys. From one anchor agent @maziinais has 15 key. The second anchor, agent @mamucLV has already 25. The local agent @Skabargapakalaa is quickly found, who will be in Skaistkalne at the beginning of FS and create the link to other anchor. @mamucLV , meanwhile, is looking for other agents who could take part in the event. No need to search for a long time, several agents are ready!

September 26. Afternoon. Silence on the map for a long time. But suddenly, like out of the blue sky, the fun begins. Enlightenment eventually begins to plan its own operation and connects the De.ath Islands with the Seal Island. We feel the plan may fail. But time is still enough, we are looking for people with boats!

September 27. Afternoon. Resistance agent @ixtys has inflated a boat and patched holes, paddling across the Daugava to De.ath Island. All portals are being demolished.

September 27 Evening. Enlightenment agents do not rest and go back to De.ath Island. As a result of coordinated actions, De.ath Island is reconnected to Seal Island. Looking for @ixtys :)

September 30. The North Mole Lighthouse portal, which was connected to Germany and the Swedish islands, is being demolished in Ventspils. The portal stood intact for 2286 days. Understand, Enlightenment is a more global plan. De.ath Island portals must be destroyed! But in the meantime, @Skabargapakalaa meets @maziinais and gets from one anchor key.

October 2. Afternoon, around 17:00. Enlightenment rises again to De.ath Island, but the area is not clean to draw another link from De.ath Islands to the Seal Island. Resistance agents have done well with disruptive links. But at At 17:30 the area has already been cleared and the link from De.ath Island to Seal Island is being drawn again! Redistributing agents, @mamucLV with @Xelluc goes to the Cena Moor, meeting @Gameyer on the way to hand over the anchor keys. He will drag the fields. @3cl, together with @BaltaisTehvs goes again to De.ath Island. @Skabargapakalaa, meanwhile, reports that he has run into a stump and the drive has been overrun. But he say that everything will be solved and in anchor will be on time. @pincerbobs , @Mihalics , @maziinais are already going to the designated porting sites. 18:35 @3cl moved to De.ath Island for the third time. In the meantime, a third link to Seal Island appears. One from the island and two from each side of the river. Fortunately, there are three agents who will hit these three portals at the same time and @Gameyer will be able to draw a link from Jurmala across the Gulf of Riga. Around 19:15 the portals of De.ath Island fall and @Gameyer draws a link. Meanwhile, @Skabargapakalaa arrives in Skaistkalne and draws link from this anchor. Now we only need to connect two dots! However, the Enlightenment agent is very active in Jaunolaine and it is not possible to put on Field for a long time. Meanwhile, @Xelluc stands in the small tower of the Price Moor Trail and @mamucLV runs to the big tower to remove the disturbing links at the same time. Meanwhile, another Enlightenmen agent was approaching in Jurmala and was going to break our link across the bay. But at 20:01 the fields are put up. But that's not all, @Gameyer has to be able to go to Lapmezciems, put on the next layers, so that we are a bit safe from the Enlightenmen agent in Jurmala. After @Gameyer pulls up all the portals from Lapmezciems, on the way he meets @Xelluc and @mamucLV, hands over the anchor keys and goes home. Next fielding continues @mamucLV, in general putting on 14 fields. And at 21:48, the operation is over, as is the First Saturday event. But at 22:09 one anchor is removed. 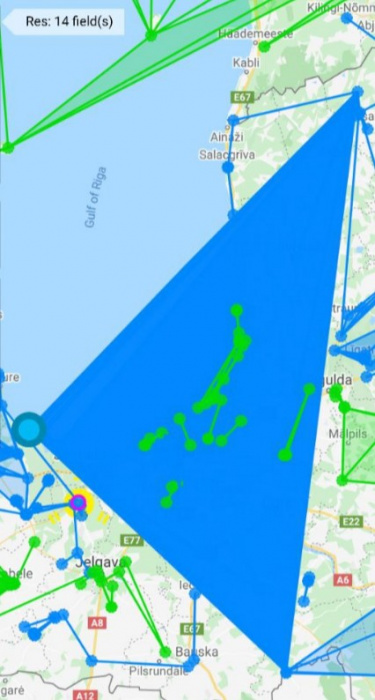 October 3. Evening. @mamucLV can't calm down. Looking for ways to re-envelop. Finds a portal in Grenctal, which can pass through Sigulda, Ogre to another anchor through the eye of a needle. Agent @Skabargapakalaa has keys from anchor. After being asked to go to Grenctal, he doesn't think long and goes there. By clearing everything that disturbs along the way. 21:28 @Skabargapakalaa is in Grenctal. And a link to anchor is drawn. While @Skabargapakalaa goes back to the house, agent @TheAdata goes from Jelgava to Iecava according to the keys of Grenctal. 22:27 departs from Iecava to Jelgava. The new agent @TurboKotlete is already waiting for this to deliver the keys @mamucLV to Tireli, which will go to Kemeri to start fielding. 11:11 PM @TurboKotlete brings the keys. We think that we will both go further to Kemeri and other portals. 23:33 Riga is again covered in beautiful blue!

October 4. Night. 00:20. Let @TurboKotlete apply the remaining nine planned layers. This one gets his 4LVL and the first medal - Onyx Illuminator :) 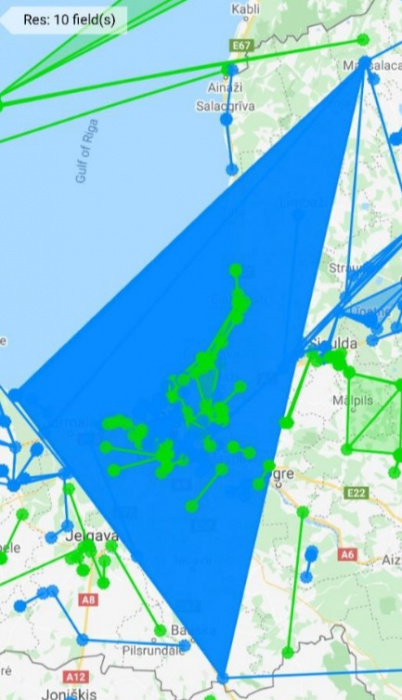 Many thanks, Resistance agents for this crazy idea!