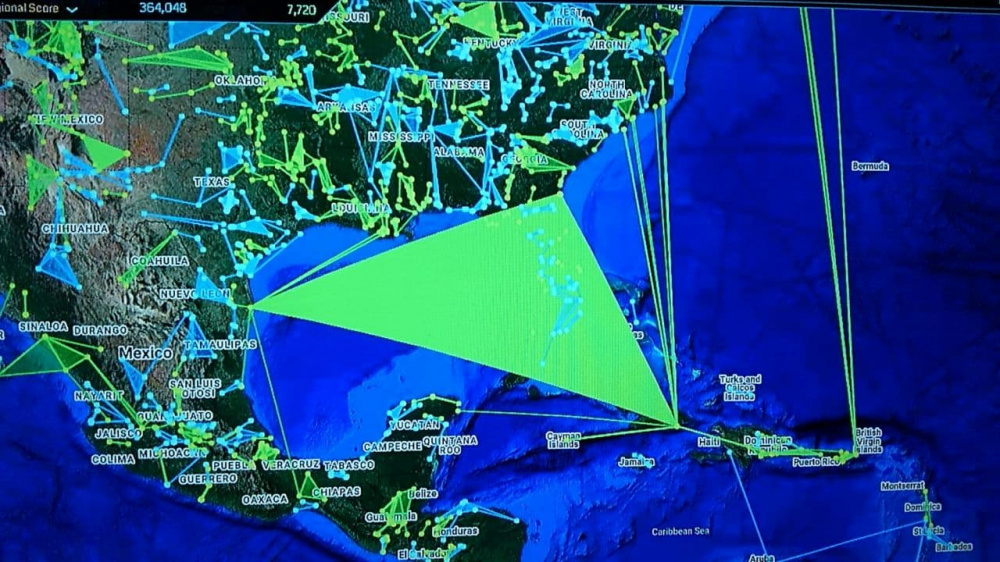 All of Florida! Well, almost.  Atlantic Coast to Texas to Guantanamo - now that's a triangle we could love.  And it was all put together by agent BigTunaCan. He likes his Sashimi in layers, lots of layers, with a little Wasabee on the side.

This was an operation that has been in the planning for months. Initially the spine was on an island that is accessible only by boat and ferry, but the team objected to “hard” anchors, so Jekyll Island won. Plus, it had the possibility of 50 layers.

Clearing: Two Tallahassee agents, working gradually over the days preceding the op, removed some strategic blockers.  At throw time only 6 blockers remained for the 10-agent clear team to deal with. At precisely 2:00 pm EST the GO signal went out and the lane was clear withing seconds. The first field was up (along with a few blocking links) and Florida was green!

Fielding: According to the plan, agents moved from portal-to-portal trekking north on the island, linking to the anchors and adding more layers – but after 6 layers everything stopped. The anchor on Guantanamo (Gitmo) was gone! Spoofed! The base of the field was gone. The fields that had been thrown were gone along with over 60 links to Gitmo from all along the Atlantic Coast - and there was nothing to do but wait on Niantic to restore. After some delay and many angry messages, the frustrated throw team departed Jekyll Island. Contemplating, during the drive home, the time and money that was lost to this spoofer!

Spoofing: Niantic was notified of the spoof and while they were investigating an Enlightened agent on Gitmo killed the blue portal and redeployed so that some of the 60 links that were destroyed could be replaced. Then, after 30 minutes or so, the base link re-appeared. Niantic had restored the base link! The throw team (what was left of them) returned to the spine and walked the now-darkened beach to replace 26 layers. Their victory was dampened when they learned the truth about the base link. It wasn’t Niantic who restored the link, but an Enlightened agent. Another spoof!

Drama: We asked Niantic to remove the illegal base link (and all our fields). It was placed there by a spoof. But since there was “legitimate play” after the spoof they said they would do nothing. Now we had a dilemma. We want the Resistance to play honorably and most of them do. But now it was on us! What would be the honorable thing to do since the fields we had just thrown were done so on an illegitimate base? Before we could reach a consensus and get agents to the anchors, Resistance agents Bleiddn and Violation1st began to take the field down legitimately from the spine. It became a non-issue. We close the book on this but hesitate to call it successful.

Statistics: The op covered portions of 2 states, 2 time zones, 2 days, 2 dozen agents and 2 dozen layers made check point. There were 2 spoofs and 2 throws and way too much drama.

Miles driven: The teams drove a combined total of over 4,000 miles.