Why is the Mission review system so arbitrary and in general so bad.

I'm going to guess that the heart of the reason is that the people who run the game and review missions, and the players who do and create missions, have a completely different and non-compatible view of what a mission is and what it's for in the game.

I love to do missions, and I've created a few too. When you have over a 1000 missions on your scanner, you will have seen a lot of different types and get to know what's a good mission that players like to do and be something you will travel to another city and have on your must have list, and what's not going to get any likes.

Niantic's ideal of what a mission should accomplish is to get you, the player, to know and learn about a place and find new and interesting waypoints. Mission medal Images should reflect those waypoints. 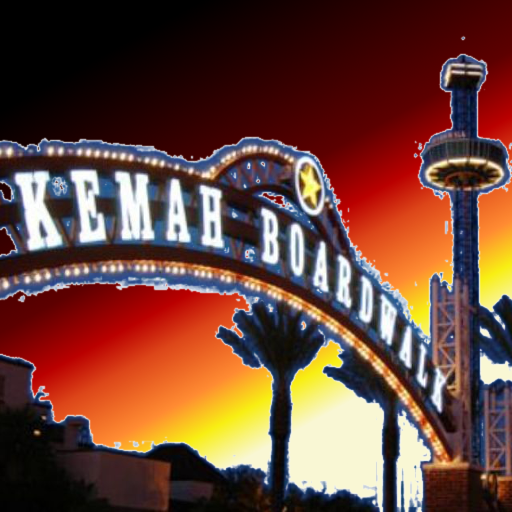 This was the single mission medal image I did for one of my first missions, a one shot called "Burn the Boardwalk". This mission fits this idea. It's all cap and upgrade, so blowing up stuff is what it is about and all waypoints are unique, nothing is recycled. Not all that many people have done this one, but a few tourists have liked it. I was just learning about creating missions.

Most people who do lots of missions, have scanners that look like this:

That one is called "Walking into the Rainbow" and it's in Downtown Houston near and around City Hall. I did NOT create this one. It's beautiful isn't it? A lot of visitors to Houston and a lot of the locals have done this mission banner set. It's very popular, if not one of the most popular mission banners in Houston.

The problem is, this isn't the kind of mission set that mission reviewers want you to create. The mission waypoints are all around city hall and there are probably only 20 unique field trip waypoints and portals involved. Today, if you were to submit this banner set, it would be outright rejected for the fact there are not enough waypoints that are different, even though that's not mentioned anywhere in the rejection letter you will get or in the rules that you are given for missions. You will get a generic rejection that will tell you that you don't have a clear theme. Even though the descriptions in this mission banner are very much consistent and mentions the theater district area, which is right there, next door to City hall and this looks pretty artsy which is in theme of the Theater District. It's rejected because it's a "Speed Banner". It's a banner with only a few portals and field trip waypoints. You can do this one in about an hour or so. People love this banner. Really, they love it. If this were really a bad thing, no one would do this mission banner set.

But, Niantic wants everyone to fit and conform to their ideal of what mission banners are supposed to be in their opinion. In fact, they'd rather you not make these banners, they really don't like them. Players came up with the banner idea and this was never something that the creators of the game ever thought that people would do. The past several years, they've tried to put a lock down on this whole banner idea. For a while they decided to stop banners longer than 18 missions. So banner writers started getting creative and naming the different parts of banners with different names or numbering them in different ways to get around that 18 mission banner limit. Face it, people love banners or they wouldn't be coming up with creative ideas to get them published. So Niantic gave up on that limit. Since Speed banners don't fit any of the rejection letters that they have to reject them with, in that it doesn't actually break any well defined rules, they hit you with the generic rejection letter. This makes a lot of mission writers angry and frustrated. What makes it worse, is if you want to do a banner in an area with only an isolated small number of portals, you don't have much a choice than a "speed banner". They will "recommend" you only do a single one off mission, and well, few people want to do those.

I just want to know, why is it so "WRONG" to have a speed banner when it doesn't actually break the ideals of what missions should be? Why are mission reviewers so bent on making missions fit this restrictive ideal of unique waypoints for each mission?

The Game is for the players, and Niantic needs to realize they really don't own this game as much as the players do. Without your players, you wouldn't have a game, and a lot of those players love banners. And if you think about it, these missions really enhance the game, they make it fun and easy to play and people have something to show off on their scanners. It's player driven, creative and fun and most of all, beautiful.

So why not speed banners?