During the Second weekend in July 2021, (yes, the weekend of Niantics pioneer Second Sunday) our beloved country was swarmed with one of the most heartbreaking events I have ever seen... Riots and looting took carnage through 2 of our 9 provinces, wreaking havoc in it's wake and sending citizens across the country into a spiral of panic and fear.

Having just completed our first Second Sunday, chatter was already circulating on our Telegram group about how we were going to approach the next few sets of mission days, now that they had to be official NIA MD missions. NIA had also announced that it would be level 8 weekend, and the appeal of double AP had me hoping to pull off something huge. I had also been wanting to do a cross-faction field art for quite some time, so I'd suggested that we combine the weekends events into one massive operation, consisting of both an x-fac field art and MD mission sets required for the badge count.

I proposed the idea to the group and the general feel from everybody, was that they would be keen to pull something off, if they were available over the weekend.

So there I was, panning through deferent areas of Cape Town on intel, looking for something to jump out at me, and hearing the depressing news of our country, flying on a downward spiral when somewhere in the news reports I'd heard our National Anthem playing "... and united, We shall stand....." and it hit me, we need to build our flag, showing our factions standing united for the beautiful country we call home.

I'd tried a few different orientations for the flags shape, but I just couldn't find something that worked, and the challenge of planning this field art was soon increased, as @choc18 had just informed me that the owner of a local watering hole, Darling Brew, in Woodstock, had offered a promotion for agents during the course of level 8 weekend, so I needed to find a way to factor its closest portals into the fielding plan.

After a few more attempts of trying to bring this vision to life, I'd finally figured out a plan to make this field art work for us and came up with this vision. Our National Flag, flying proudly on a flag pole at the top of a mountain. 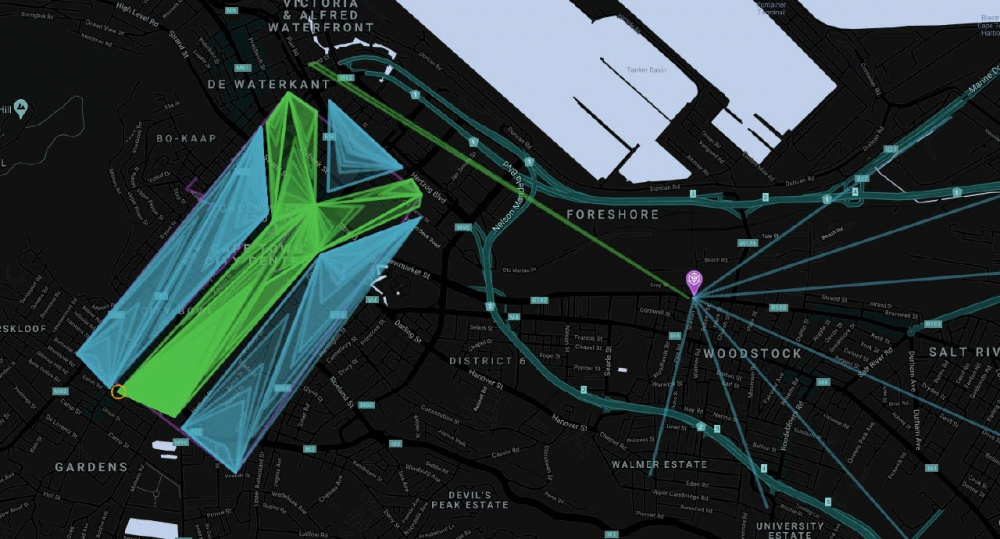 The plan incorporated portals from 6 of the official Mission Day missions and the flag itself spanned for approximately 1.2 km from end to end.

Finally, August 7th arrived, after a brief morning trip of unloading some XMP's on a Smurf neighborhood, I went off to the CBD to start clearing up and collecting keys. I figured I'd tackle the largest key requirements first, that way we could split up and focus on all the smaller quantities of required keys when all the other agents could join.

I jumped between cleaning up the area, remote participation in the Gauteng IFS, and key collection for the remainder of the day, a little disheartened by the low agent turnout and the number of agents who had adulting pull them out of the operation. But I'd had a surge of hope when @CatTrim had popped up in the afternoon to aid with the key collection.

at the end of the day, I'd made my way off to @cur8or's Home Portal, to drop off my collection of keys for the planned starburst to the portal at Darling Brew which was field blocked by an involved agent, @DustyMuffin, the very next morning😁🤣😁

8th August, 5 am, I wake up and head back to the CBD, with a fresh perspective, and a plan to finish up the last of the necessary key collection requirements. I successfully managed to raise suspicion with the local police patrols, as I was sitting suspiciously in my car parked at an anchor, hacking for keys, whilst they were in the middle of what appeared to be a shift change, waiting for there to be sufficient daylight before I can start walking around on foot.

I'd even had the exciting battle of GPS drift at one of our anchors, where eventually I figured out a weird path I could walk, that would maintain GPS connection while allowing the exact amount of time to lapse between hacks. I swear, Moguls would have thought I was tripping on something.

My first agent interaction of the day happened when @Rath24 sent me a message "Which green market square needs 20?" at that point I was 80m away from that portal, collecting keys at another anchor, so I seized the opportunity to use one of the NIA gifted fireworks I'd claimed out of the store that weekend to place a marker on the correct portal, with the response "Fireworks!" 😁

Myself and @Rath24 then made our way around the CBD checking off the list of keys that we needed to complete the plan, hacking portal after portal, catching up, and discussing Ingress, as agents do, until we were ready to meet up with the other agents.

Resistance agents: @cur8or, @daemon99, and @chefster and Enlightened agent @DustyMuffin joined myself and @Rath24 at the Cape Town Civic center, where we met, exchanged keys (after wasting about 15 minutes trying to track keys that were picked up by the wrong player) and set off with the Mission Day medals & Fielding plan.

20 Kilometer Piece of Art, A beacon of Hope For South Africa.GIF

Halfway through the operation, a Resistance agent, @ChefLow2 started blasting off layers of the center of our artwork, and myself and @DustyMuffin raced off to chat with this Smurf who was wrecking our plans, to cease fire until we had completed it. Thankfully he complied and we were able to proceed with our plans.

Finally after around 4 hours of walking around Cape Town, 2 kinetic programs completed and the inability to feel my feet our flag was finished, but @cur8orand his spawn had accidently (or deliberately, you know how Smurfs are) shot down the flag pole, which we did not have any more keys to restore, so we accepted our losses and called it a victory.

BUT @cur8or had a trick up his sleeves, The next morning (9 August) he'd headed out to Chapmans peak, and threw a ton of links towards the field art we'd created the day before, Turning it into a "bat signal" of sorts

This was a huge success, and a great ton of fun. it was absolutely epic to be involved in his operation.

also a huge thank you to @Choc18 and The Darling Brew, Woodstock for the awesome promotion made available to agents during the course of the weekend