Okopipi is the indigenous Tirio name for the Blue Poison Dart Frog, a fitting symbol for the achievement of an ENL agent recursing to RES, leveling up to L16, and then recursing back to ENL in a single day. Certainly better than some kind of green Smurf. 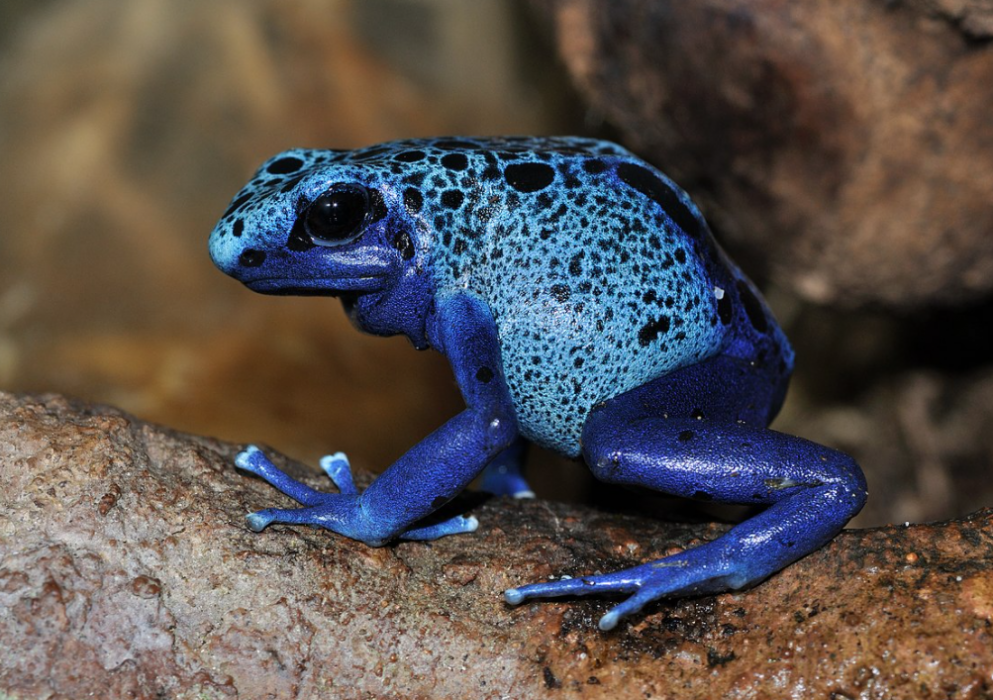 I set my sights on this task in December 2020 after recursing for my third time. All that was needed was: a fielding plan, lots of SBUL, Jarvis, Ada, and about 4000 keys. But I thought a year (expected Nov 2021 birthday event) was plenty of time.

The other goal was for me to do as much of the planning, harvesting, etc. on my own as possible, although I knew I could not do it completely on my own.

Below is an admittedly thorough description of the planning and operational process.

There are several basic ways that a fielding plan can be designed. The simplest involves a near perfect line of 40 portals. As my goal was to do this inside the city of Edmonton, Canada this was not an option as there are no such linear clusters in a workable area. After many iterations, the final design was chosen as a four-sided exterior border around the northern half of the main University of Alberta campus.

In the image below: 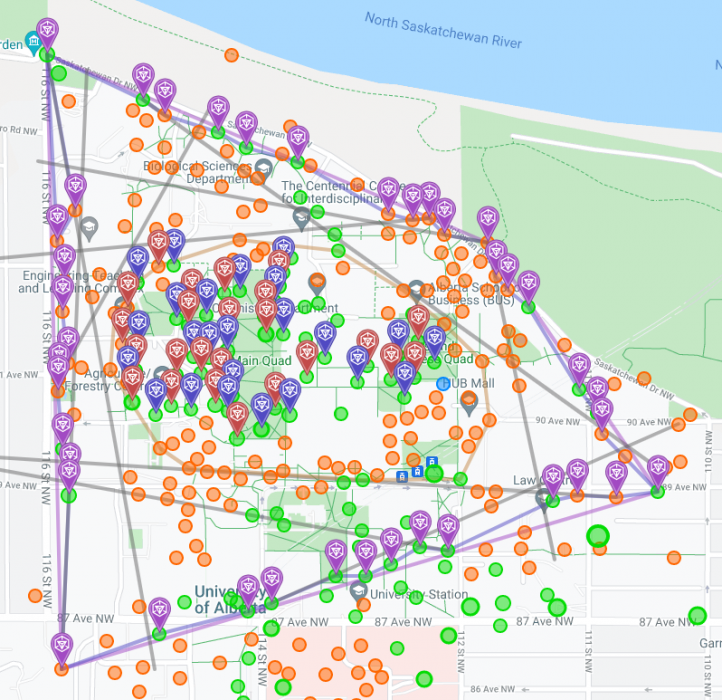 The advantage of a four-sided perimeter is that you have far more options for identifying linear sets of portals while still achieving 76 fields per 40-link field (only 1 less than the maximum 77 fields, which requires 40 portals in a single line).

Two sets of hub portals are needed because of the 1-hour virus incubation period. The basic idea is:

loop 1: field and the Jarvis each red portal

loop 2: Ada the red portals and field and Jarvis the blue portals

loop 3: Ada the blue portals and field and Jarvis the red portals ...

All that sounds great, but switching factions creates a complication: if the 2xAP event is not also a double deploy event you need someone to add an extra 2 SBUL and unless you can really trust someone from your temporary faction your short-term former teammates can't add SBUL until after you first field and Jarvis each hub. Unfortunately, I did not have a local RES agent I could trust to that high level.

So, the final plan then became:

loop 1 and 2: throw 24-links per hub (2 SBUL per portal) and have a trusted ENL agent add two SBUL after the Jarvis

(AP assumes an active APEX and a double AP event)

Step 2: Leveling to 16 again plus SBUL, Jarvis, and ADA harvesting

The basic plan above requires: 192 SBUL, 113 Jarvis, and 65 Ada (assuming no mistakes/surprises).

The kinetic capsule made SBUL harvesting significantly easier, although I did regularly run into a rare link amp shortage, especially after a 2km event. Thankfully, I had stockpiled about 80 Jarvis and 40 Ada over the years.

Thankfully, the option for a C.O.R.E. subscription allowed me to add an extra 500 to my inventory. Another fortunate in-game development for me!

Based on experience, local ENL had concluded that a flipped portal would drop about 20% of the keys. Because drops are random, and because I would need to expect that I would get an unlucky number of drops for at least one of the 40 perimeter portals, some binomial distribution statistical calculations suggested I could safely assume I would get at least 10% of the keys back for each portal and so I could reduce my needs to an average of 88 keys per portal (3529 total keys was the final total estimate). This saving of 339 keys would help simplify the annoying (but critical) issue of key management.

2500 storage space and 6 key lockers still only gives 3100 spaces for keys (minus boosters, capsules, etc.). The last step was to recruit two low activity ENL agents to store keys in quantum capsules (finally something to use all those FS mastercode capsules for!).

I was able to farm all the needed keys over 8 key farming trips over 5 weekends between June 12 and July 11 (the record breaking heat wave in late June stopped all farming for more than a week - Random Event Number 1, with more to come). Now, it was just a matter of waiting for a 2xAP event. Luckily for me, one was just around the corner: The July 23-Aug 2 Field Art Challenge. I had about 10 days to refocus from farming to ops. Saturday 24 July 2021 was to be the day.

One of the disadvantages of switching factions to level up in a day is that you cannot pre-build the base fields that are your target portals. In my case, my fielding area is ENL dominated, although it is dominated by my primary co-conspirator: @Naruwasher, who agreed to lay off recharging for a few days to make it easier to take down the many blockers, on sometimes well-shielded portals, that were still up: 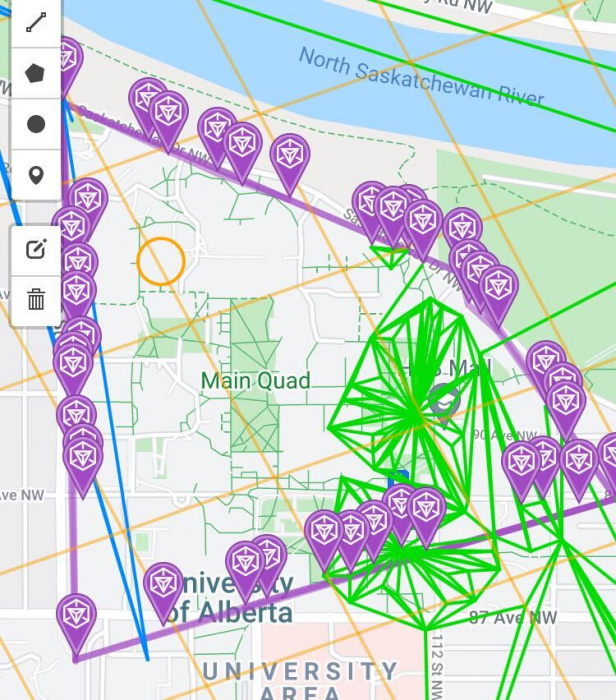 Random Event Number 2: a blissfully unaware visiting ENL agent recharges many of the key portals a couple days before.

Friday night I start the recurse process and by 5:30 AM I am a little blue RES agent: 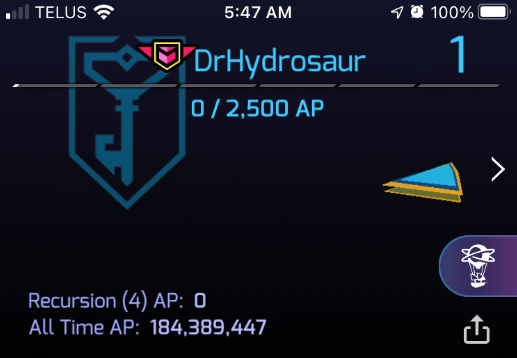 I try to take down a few local fields that I had built near home but L1 bursters are worse than I imagined/remembered. Why did I shield these things 6 months ago? They're 90% decayed L1 resos! By 6:30 AM I manage to take down 2 key hubs (maybe 150 L1 bursters later), enough with an active APEX to just get to level 4. For some reason, I thought you got bursters in your low level up packs ... you don't.

7 AM, I arrive at the University, turn on an APEX or two, and begin building the perimeter as I approach the frog web (?) from the SW: 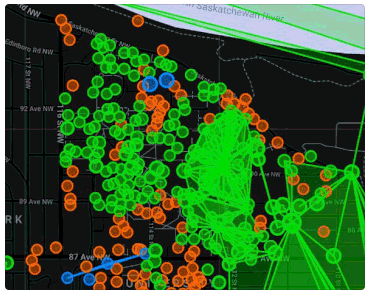 It ends up taking almost 2 hours to take down the well shielded portals, farming L4 and L5 bursters, attacking, farming ... Naruwasher arrives to donate some much needed L5-7 bursters. By 9 am, the links are down and the perimeter is nearing completion: 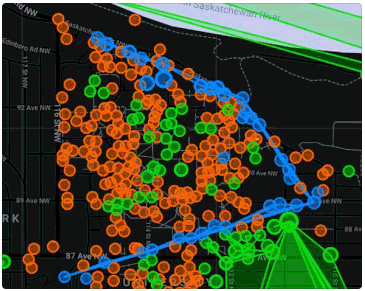 Dreams of any speed records are abandoned but at least I am almost 500k AP ahead of schedule thanks to all the smashing AP.

Random Event Number 3: my 1-foot charger cord is missing! Retracing steps yields nothing. Naruwashser to the rescue again, as he gives me his and rushes home to grab a second for himself. I pledge to be much more carful with this cord (I am glad to be able to report that I was).

By 9:30 am, the perimeter is complete and it is time to seriously field! 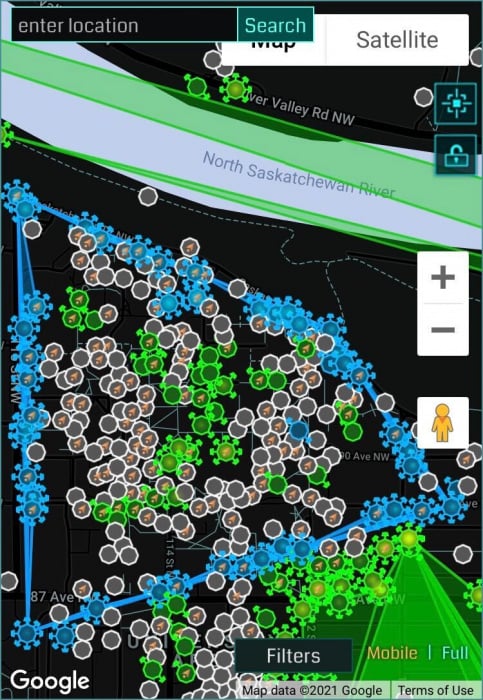 Here is an image of some early 24 link sets of fields (first focuses on South and West sides, while the second focuses on the East and North: 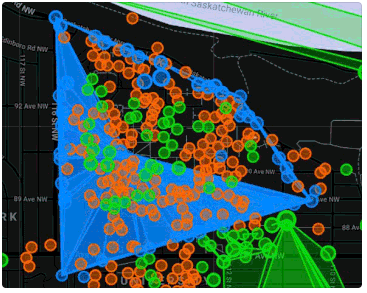 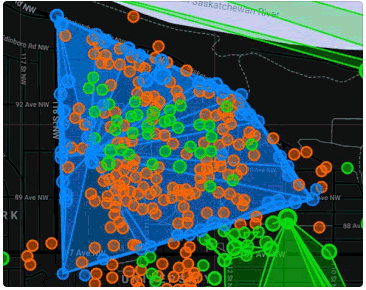 at 11:30 am a trusted ENL agent arrives to drop off 20 quantum capsules of 96 keys each (48 per portal). Random Event Number 4: 15 minutes later we notice there are only 19 capsules. What happened is never discovered, although I did scan the agent's inventory before they left to verify there were no remaining capsules, so I assume it was my error.

We end up spending 60 minutes figuring out which 96 keys are missing (48 each for two portals, by design), and then farming the two portals until we recollect them - thank-you minimum 1 key per glyph hack feature of the FieldArt Event! We are now over 2 hours behind schedule. 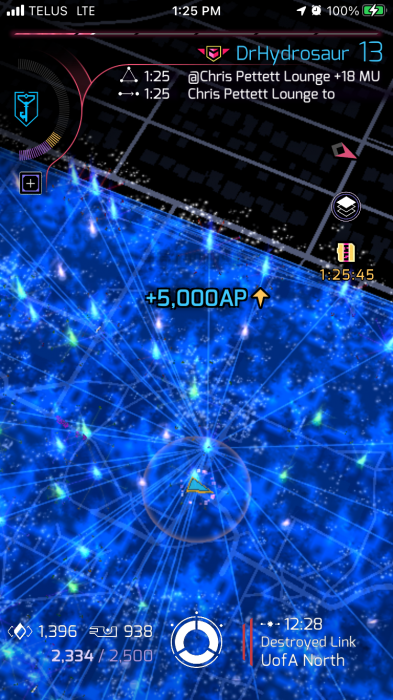 At that point things progress so nicely we forget to collect more screen captures! But more drama is ahead ...

Random Event Number 5: About 3/4 through I notice that I cannot link to two of the portals on the southern boundary. It appears that a ENL agent on a bus decided to blast a few bursters while passing by, damaging several perimeter portals and taking down 2 of them. It takes over 30 minutes to patch the portals, finish the 40 links, Jarvis, and finish the perimeter links I could not throw under a field. In doing so, I alter the perimeter pattern and inadvertently miss a connecting link cutting through the extremely narrow fields along the perimeter. 76 fields per hub is no longer possible. But I am over 400k ahead of planned pace so all is OK.

Random Event Number 6: early on in the last loop a ghost RES link stays up after the portal is Jarvised ("Beautiful British Col..." has a blue link to "Donadeo Innovation ..." but all its resos are GREEN!): 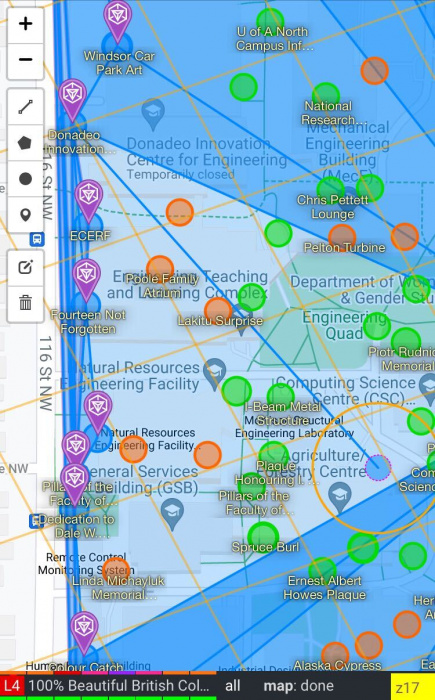 This is not immediately noticed, although I do notice that I am not using up keys a fast as I expect, my 400k AP contingency is shrinking fast, and I start to feel like certain portals are not coming up as link options any more.

By the time I get to the last planned hub portal ("F-t Franks Hot Dogs") I am over 200k AP behind pace and need one more hub ("South Flats") to reach Level 16 (which I need to first Ada so I cannot immediately Jarivs it): 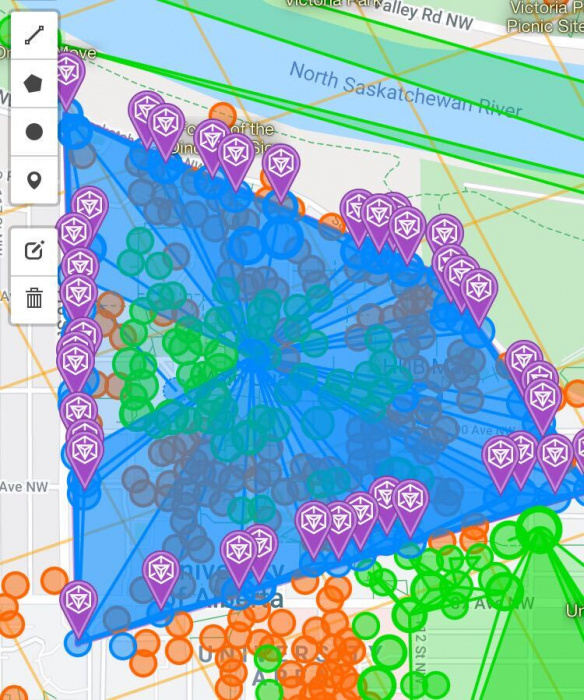 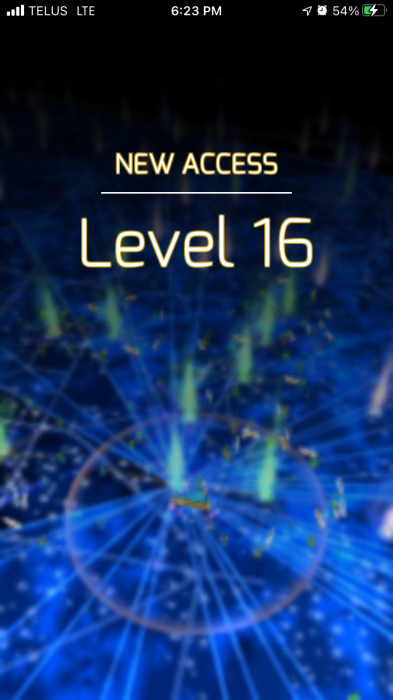 And here is an incomplete GIF (dominated by early stages, plus the final hub field, with ghost link):

No speed records today as I finish 4 hours behind my original plan, after almost 12 hours of fielding and random event damage control. 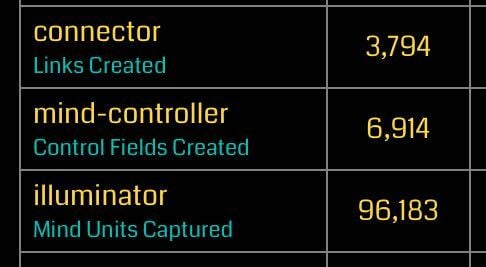 And for posterity, proof of my rare achievement in the local MU standings (L16 on both sides): 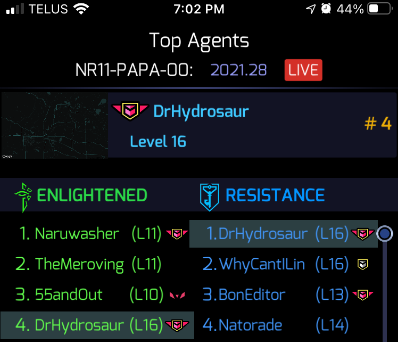 And before bed-time I am safely back in my lily pad, slightly blue for wear: 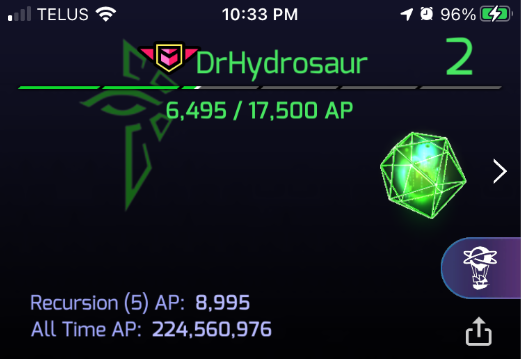 My never ending and completely unreserved thanks to ENL agent Naruwasher for: