But - let's start from the beginning.

On one side - I have never been attracted to building HCF fields larger than HCF4, because I can make a mistake even in linking in HCF4, but… If it were not necessary to do too much links…

And when I was browsing the videos of agent @57Cell, I caught my eye of the episode about "optimizing the number of portals in HCF fields using cross links". It was an inspiration. No, not for cross-linking. For optimize the number of portal in HCF.

I counted. I drew. I counted again. Hm.

It turned out that using only these two collocated portals and two regular portals I will build ... HCF7! Homogeneous field impossible to achieve in the "normal" way. A field that on "normal" portals could only be made during an event such as a "matryoshka", when it was allowed to link from inside the fields. A field that would require the use of 367 portals on "normal" portals. And here - 9 portals and also HCF7. Pretty nice optimization.

Well then…. I just decided to do it.

On June 17, 2021, I took a day off and went to Charlotta Valley. And I did it! The smallest HCF7 in the world. 9 portals, 20 links and nothing more! Everything took just a few minutes.

The „quintupled" portal was used as an internal portal. One of the "doubled" portals was used like a "regular" portal - to create the base layer and the five layers when linking to „quinupled”. From the second portal from "doubled" collocated, I made only one full layer. The seventh. 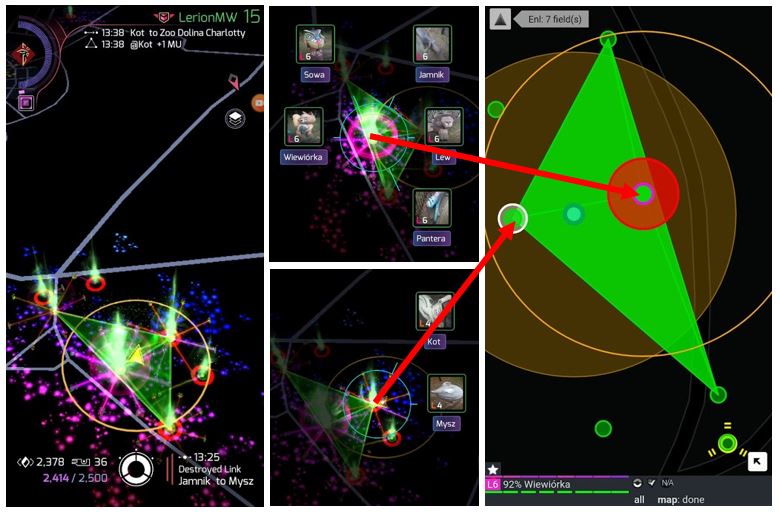 And that would actually be all.  I gave short info in Enlightened Polska channel and I didn't think about writing more about it. Anyone could repeat this simple linking and boast that he "did a HCF7 solo".

But, on July 2, 2021, I saw in intel, that none of these portals are collocated anymore. They were pulled apart. I don't know if Niantic did it on its own initiative or if someone asked to be moved apart. Doesn't matter. They are gone. Sad, becouse,  in my opinion, "quintupled" was a curiosity on a global scale. But well, it's over. Nobody will repeat "HCF7 for the lazy man". Nobody will discover, what else can be done using "quintupled" together with "doubled" in the Charlotta Valley. So I wrote. That it would be remembered that there was once such a portal  in Charlotta Valley in Poland. Quintupled. And next to him - doubled.

P.S. At the same time, Niantic decolocated the "tripled" portal near Krosno in Poland. The decolocation was made at the request of @panfolek , who, together with a group of RES agents from Poland, used this portal in June 28, 2020 to build the world's first HCF9. This action can also never be repeated.  But that's a completely different story.