Today we said our final goodbyes to one of our Enlightened WA leaders. @BobKeever, known to many as Rik was not just an amazing team member, he was a forever friend that was taken away from us far too soon. I did not know him for as long as others but I loved every moment I spent with him both in person and chatting online.

On his last day, he was down south trying to destroy a hard data anchor for our team; such was his passion for the game.

This field in his honour was planned four days ago in the wee hours of the morning when sleep just wouldn’t happen. Three afternoons were then spent collecting keys.

Then this morning I opened intel to find a stray link from a team member unaware of the plan through the planned art. I put a call out to Res and Enl players alike to destroy or flip the portal of the link and they rallied around to help. Thanks to @57Cell for dropping that link.

Rik’s name and flag was completed first before I was joined by other Enl team members to throw the love heart. Thanks to @bluesfemme, @QueenSapph, @n4paLm, @BrayoftheDonkey and @smallestparrot who helped throw the fields.

A final thanks to all of the Res and Enl agents who allowed us to do this art and kept the area clear.

@BobKeever will be greatly missed but forever in our hearts. 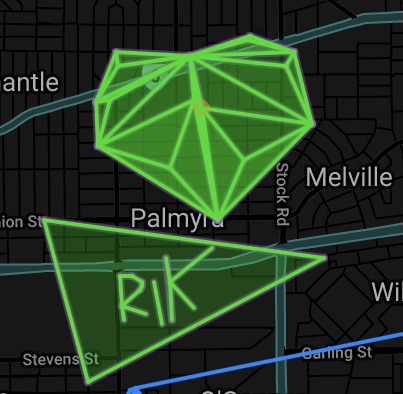