HCF6 in Rennes, France, built over a couple days during the Matryoshka event.

an HCF6 in Rennes, France

built during the Matryoshka event in April 2021

A few months ago, intrigued by homogeneous fields and encouraged by watching Agent 57cell’s great videos on the subject (full playlist here), I drew up a plan on good old DrawTools for an HCF6 in my new hometown, Rennes. 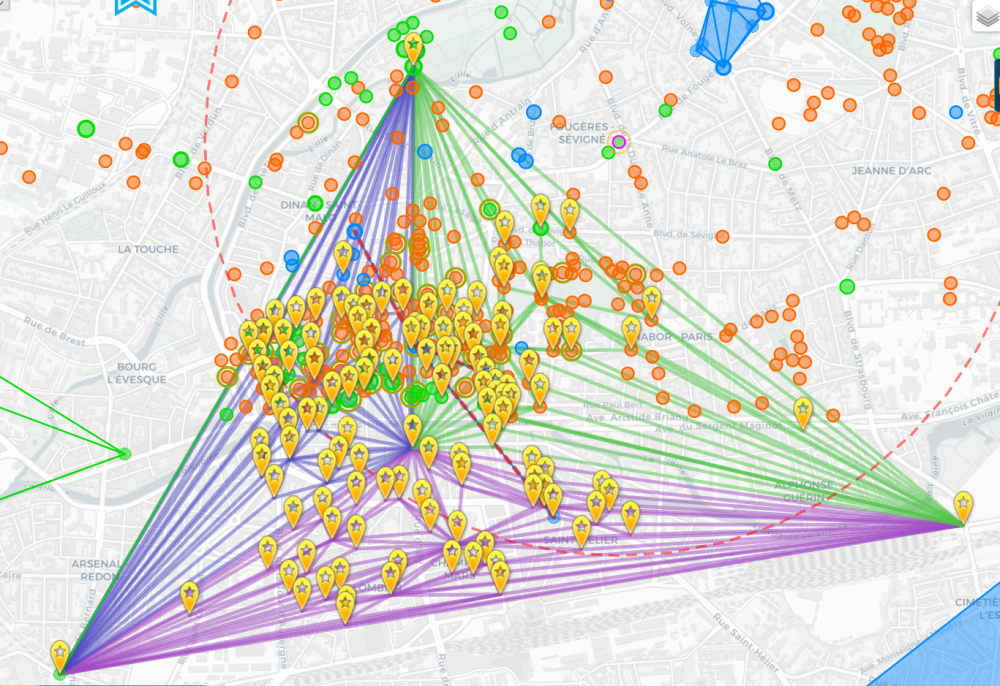 I then had difficulties coming up with a definitive link plan. A couple portals could not be reached at night (the period I assumed this plan would be put into action) and had to be linked to first. Also my small laptop screen made it an arduous effort. Nonetheless, a Telegram group was formed, interested agents joined in, and the plan was shared. But mostly due to my previously mentioned inexperience, the project sat on the bench for a few months. I’d look at the plan from time to time (eventually finding a missing link!), but apart from that, complete standby. Covid did not help of course.

Enter the Matryoshka announcement on April 21st. I had an initial feeling it would enable weird things, but it wasn’t until the evening of the 23rd that I realized how much it would simplify building an HCF. The ability to build it from anywhere inside regardless of which fields had already been made was a complete game changer. I went to bed thinking of all the keys that had to be farmed, and wondering when 57cell’s video about the event and its possibilities would air on YouTube.

Sure enough, I woke up to a notification for that very video! Mike’s energy more than compensated for my lack of preparedness. The event meant I didn’t need a linking plan : just build the biggest field first for the first layer, then head to the core and link to the anchors for the second layer. Rinse and repeat 5 times with sub-cores and sub-sub-cores and so on and I’d have an HCF6! I hesitated a moment as that seemed so simple it might ruin the challenge, only to realize I’d be a fool for not seizing the opportunity. I could always build it “the hard way” another time.

It took me a couple days to farm keys for the anchors, the core and the 3 sub-cores. I got some help from teammates in the form of keys, upgraded portals and farming mods, and after 2 days I had all the keys I needed. The combination of being able to make a level 6 portal on my own, the 90-second cooldown and glyph hacking made the whole process feasible even with such short notice (1 RHS + 1 RMH + 10 minutes ≃ 25 keys, perfect for a sub-core). Sub-sub-cores and subsequent portals I farmed lightly, and would continue farming as I built the HCF up layer by layer. This method does not optimize distance traveled, but the draw was fairly compact (the biggest link was just over 2 km), and I enjoy riding my bike anyway.

The first layer went up without any trouble on April 26th at 4:40pm.

As I was throwing the second layer, the core was taken down. I managed to **** up repairing my HCF2, which I found very amusing. I had not planned to start using my limited stock of ADA so early in the process!

The HCF2 went up around noon the next day, on April 27th. 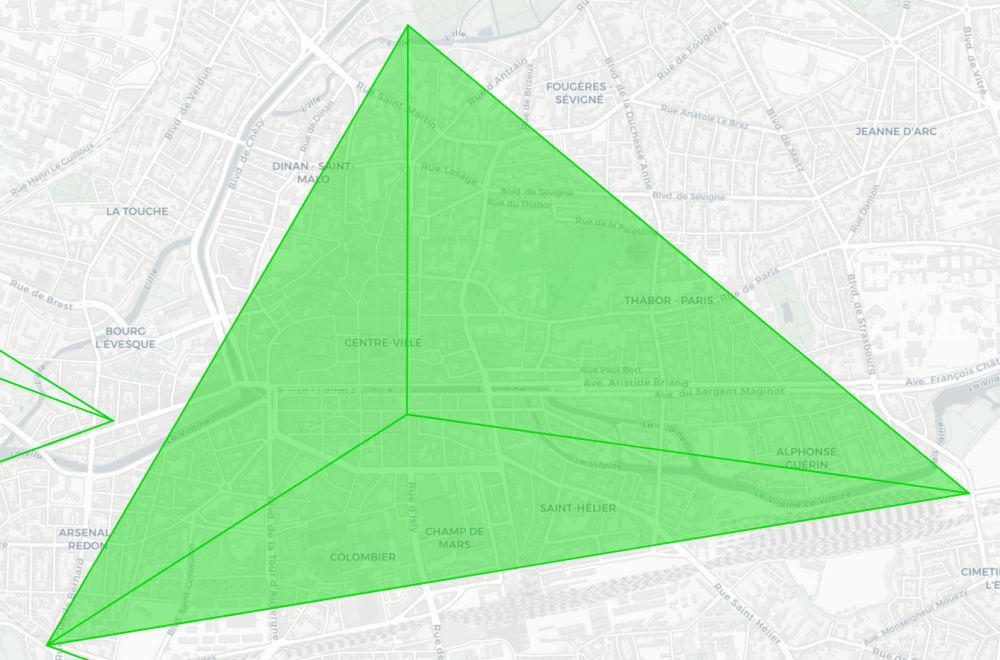 I was still gathering extra keys in case of a take-down, plus clearing a few blockers. I was able to throw the HCF3 later in the afternoon. 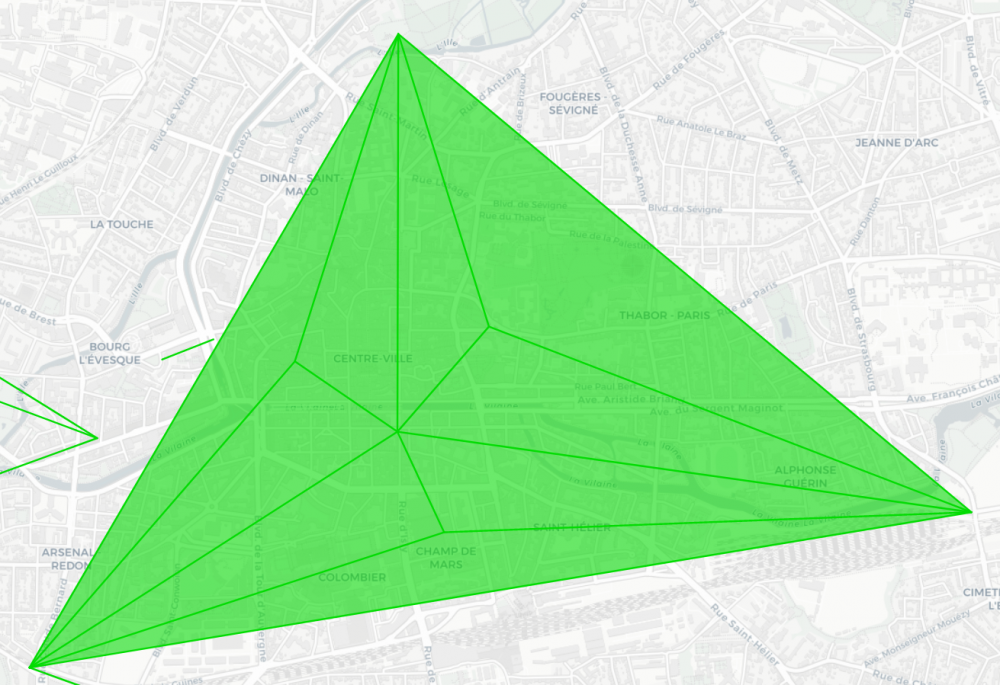 The next day I left as soon as curfew ended at 6 am to throw the HCF4, still gathering keys for the next steps as I went. At 7:35am I was done, and the structure was starting to look good! 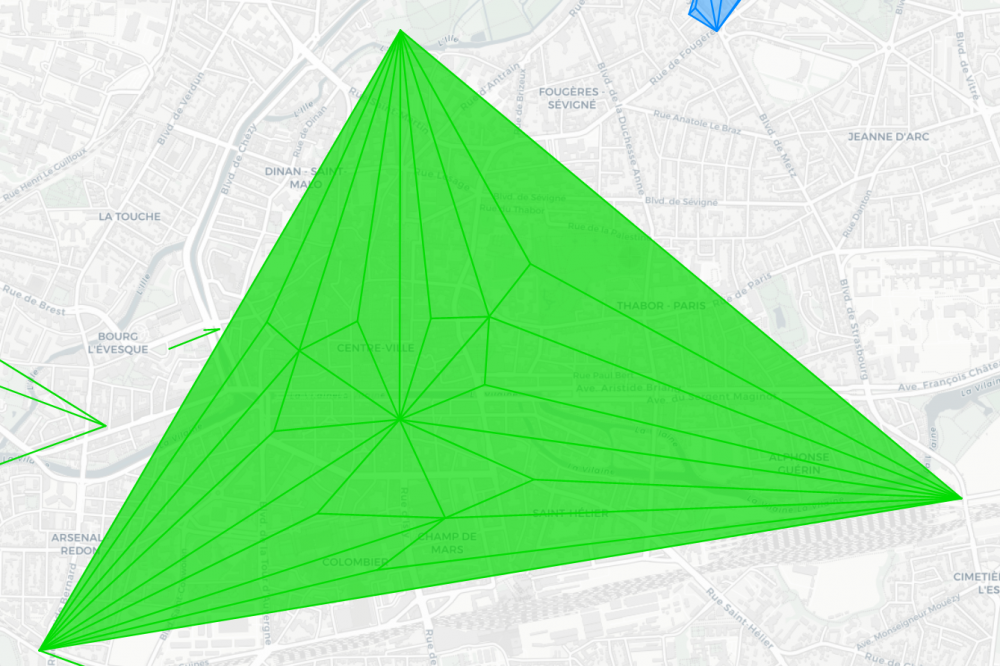 The plan for the HCF5 was pretty simple. I had prepared all that layer’s portals in a separate IITC bookmark file. All I needed to do was visit each bookmarked portal, hack 3 keys and throw the 3 links I had keys for before deleting the bookmark and going on to the next. I set out late in the morning. I took longer than expected as a portal I never had trouble reaching before was just out of reach of my GPS that day. I eventually left it behind to come back to it later. As I was almost done, the core as well as 2 sub-sub-cores were destroyed. Nothing too bad, but the HCF5 would have to wait a little longer. Trying to fix things on the fly I wasted another ADA. I eventually rebuilt the core, leaving the 2 sub-sub-cores for later. Bless you Matryoshka event for making rebuilding so easy! 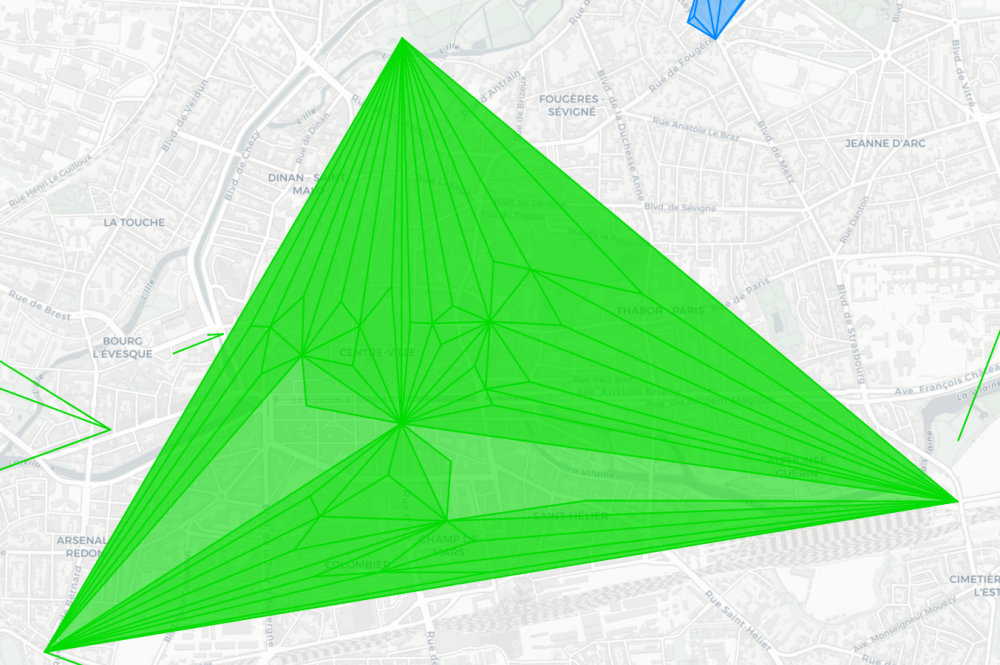 I took a break to start the afternoon. Good news was the portion with the troublesome portal had been partially destroyed, and a few extra portals meant I could redraw that area to avoid that portal. I also prepared another file of IITC bookmarks, this time for the HCF6. Getting closer! I felt like I needed to go and finish the last 2 layers as fast as possible now, as I didn’t want to be set back again by destruction of key portals. During all this I was also hoping to dodge friendly links by lone frogs. So far so good, but how long would it hold? I also learned that afternoon about the success of a solo HCF6 in the same region of France. I was unaware of the attempt, and it gave me a nice boost in motivation to finish this one.

I set out again later in the afternoon, and by 5:30pm the HCF5 was repaired, and pleasantly whole. Minor victory achieved! 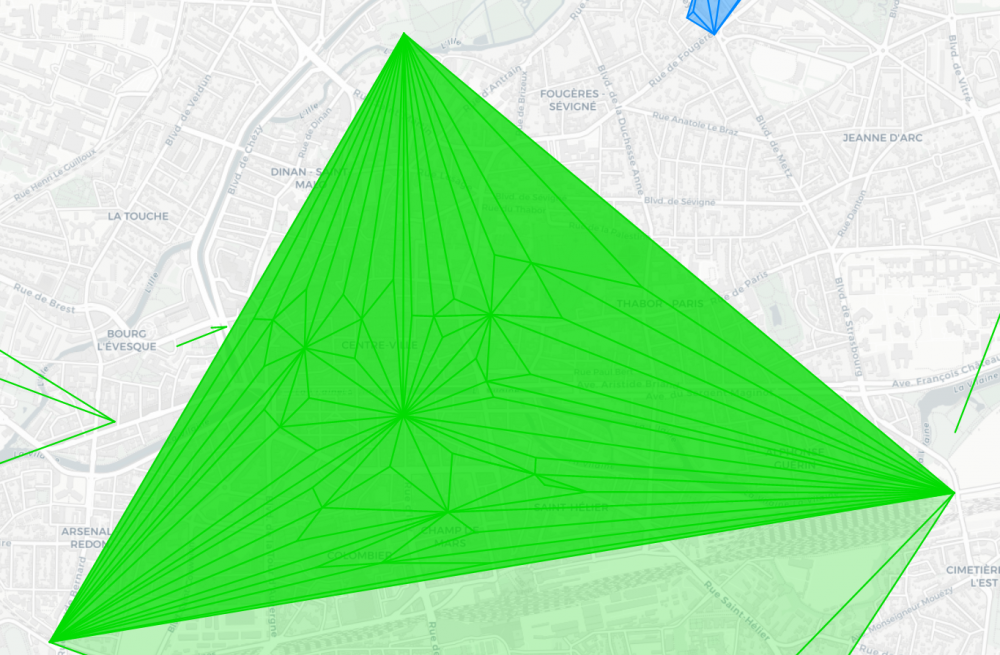 I was missing a few keys to one of the anchors after the repairs, and I farmed them before going home and curfew. I couldn’t field, but neither could other agents do too much damage except on their home portals.

The evening was spent organizing keys in capsules, as I would get some help from agent 8ballmixes for the last layer. My draw was color-coded for the 3 HCF5 combining to make the HCF6, so it was very easy to plan. He’d do one while I did another, and depending on how long it took us we’d adjust for the final HCF5.

We met as soon as curfew ended, at 6:10am on April 29th. Capsules were exchanged, instructions were repeated to avoid any misunderstanding. But again, the simplicity granted by the Matryoshka event made it very easy. Just go to a bookmarked portal, link to the 3 available portals, delete the bookmark and move on to the next. Don’t fully deploy other portals and don’t hack keys to avoid mistakes. I set off on my bicycle, and 8ballmixes pushed his skateboard in the other direction. Crunch time!

It took me an hour to finish the first HCF5. I was a little ahead of my partner, and started the remaining HCF5 while he was finishing his. At about the same moment we faced the exact same problem : a bookmarked portal on the draw had simply disappeared from the scanner, and from the intel map for that matter! The draw was a few months old, and it had not occurred to me to check for deleted portals. Yikes! Very luckily for us, they had alternatives available without any further complication. I felt very fortunate as that could have easily ruined the whole effort. We met shortly after that and split the few remaining keys. A few minutes later the final links were thrown simultaneously and at 8:30am the HCF6 was done and fireworks deployed. Yay! 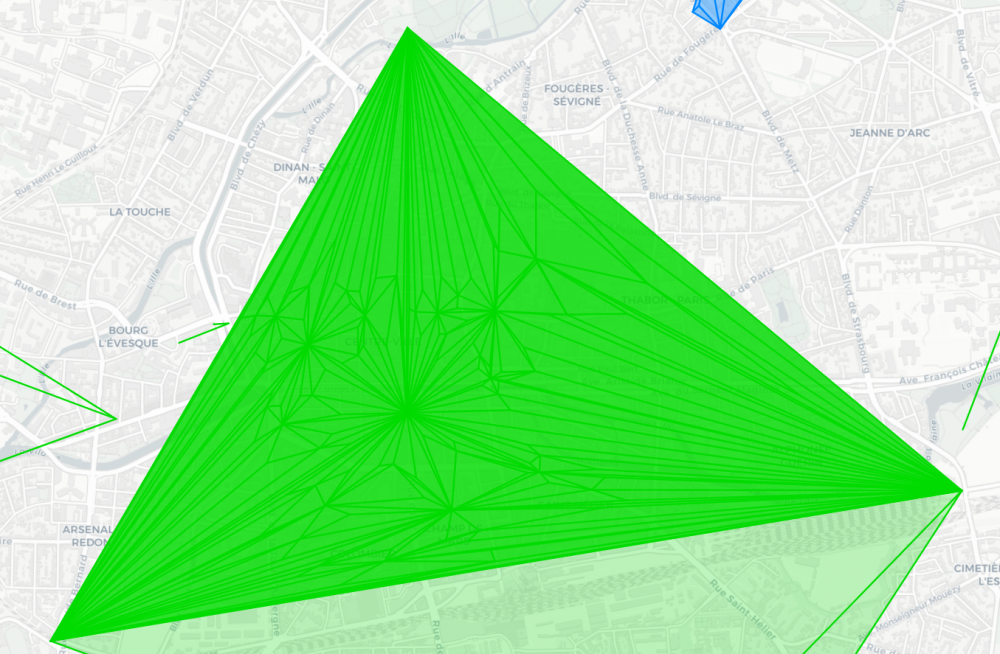 After breakfast, I had a little time to check on intel if indeed all the layers were there. I was pleased to find none were missing. And just like that, the project was a success! Telegram messages were sent, and I felt happy and proud, but also tiredness kicked in.

The HCF6 stood proudly all morning, and around 1pm the core was destroyed. 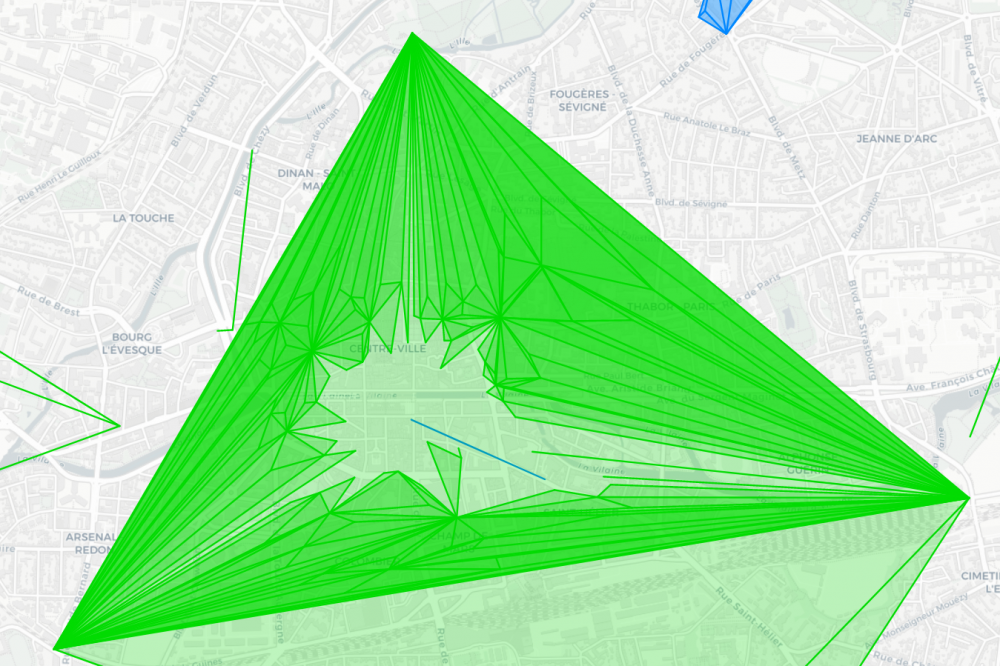 I initially set out to rebuild it, but fatigue kicked in quickly. I ended up lazily using extraneous keys standing at the core, sending links multiple times with an apex on, some SBULs and even a Battle Beacon to profit from the double AP. The result was of course not as pretty as the beautiful HCF6 that shone there earlier. In fact it might even have been sacrilegious.

Watching the structure grow over a couple days was quite fascinating. Notably at the core, with links doubling with splits at every layer added.

Remember to be nice in comms, and also that it takes two teams to play the game. Look after teammates as well as opponents. Thanks for reading!

PS : I almost forgot the mandatory GIF montage of the whole operation !