Multiples layers at once [PROPOSAL]

Hydracyan ✭✭✭✭✭
May 7 edited May 7 in General

Tl;dr: allow more than one layer to be activated simultaneously at player's will

I already had this in mind before, but the drone layer made it obvious that it IS possible. The drone layer do not interfere with the visibility of any other layer, so it can be activate together with then, and this actually raises the question if it really needs to be a layer at all, or should be always active as part of the game standards? Being a layer allow players to deactivate it, of course, but having some drones flying can't be harmful.

Back to the proposal, I think we could have the option to active multiples layers at once. One can want to see drones and uniques at same time, and constant swaping will be just annoying and counterproductive during a hunting (for uniques and drones do forcerecall).

The other layers currently are just swaping ring colors, so to allow that funcion to work with all, it will need some changes, like diferent sizes/thickness on the rings or diferent shapes too, allowing the agent to select how many and which ones he want to see.

That said, I actually think that unique visit and unique capture could actually became just one layer, with half rings for visited only and a full circle for capture (since it also count as visit), or just change the color (if both are active), since a red one will mean captured and visited and purple just visited. This solve the problems and leave a triangular shape for scanned portals (with the square for VSCP).

I'm no artist, but here's a quick concept with all activate: 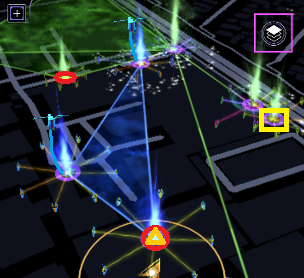