In February 2021 double AP where announced  for links. That's why there was just a funny remark: “Let’s create a Resistance Linkstar from Melibokus”. The Melibokus is the highest mountain (517m) in the area Bergstrasse (Germany / State of Hesse), which is part of the UNESCO Geopark Bergstrasse-Odenwald. Fortunately there is a portal at the top located at the public observation tower (49.724764,8.635988).

The idea was born, someone said - yes, let's do it. So from fun to fact: we started an OP. Portal key farming was performed, the surrounding cleaned. Some agents had a lot of Melibokus keys in their quantum capsules - exchanging and sharing was organized.

The weekend started, but as this was a secret Resistance Op an Enlightment agent was very busy and could disturb the Op. So we postponed it to the next weekend. And this was a good decision. A lot of blue portals became neutral by decaying. A little less work for the cleaner.

At saturday night, February 27th, 8:00 pm we started to link from the surroundings of the mountain Melibokus to the portal Melibokus.

Thanks to the 12 participating Resistance agents (in alphabetical order) for 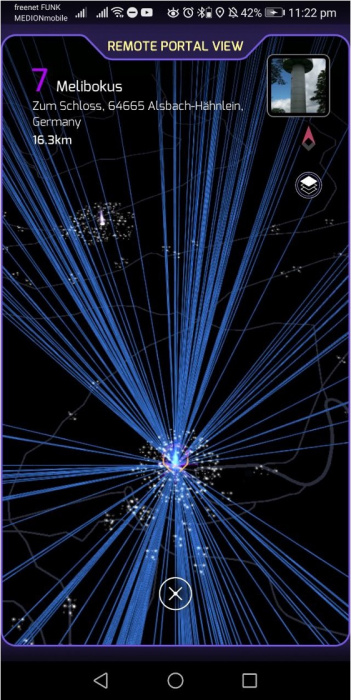 If you want to have a view from Melibokus, try: http://www.melibokus.com/cam/rechts_g.jpg