A really small request, but I have a tendency to accidentally double-tap the complete scan button when I do Portal Scans, so after I finish doing the scan I immediately tap the same area again and it cancels and takes me back to the pre-scan screen.

Before the 'Encoding Portal Scan' step was removed, if you weren't happy with your scan, you could tap 'cancel' which was quite high up from the confirm button. But because that screen is completely skipped, it goes straight to the Portal Scan Preview, and both the complete button and the cancel button are in the same place, which is a nightmare for people who accidentally/subconsciously double-tap things. 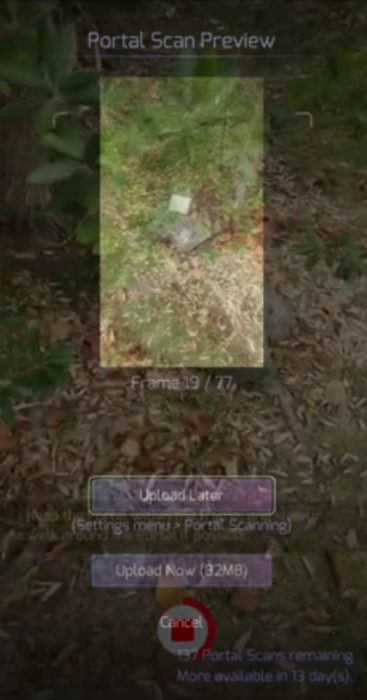 The image above is an overlay of the Portal Scanning Process and Portal Scan Preview screens from grogyan's video, which you can see the red complete button on the first screen is right where the cancel button appears on the next. Unfortunately, this actually catches me much more than I should admit.

It's already enough that it's 15 seconds long for each one, but when you accidentally tap cancel after confirming your scan... it throws away the scan and it is painful. Would it be possible to at least move the cancel button or put like a half to one second cooldown before Cancel can be tapped?