Truthseekers: The Exogenous are gone. Nemesis is gone. But our fight is far from over.

For those of you just joining us: My name is P.A. Chapeau. For years, I have been on a mission to uncover the truth of the XM conspiracy and make all of that information available to the public. And, oftentimes, this has brought me into conflict with the NIA, the secret government agency that is perhaps most culpable of perpetuating the hoax that XM doesn’t exist.

Now, over the course of the past year, my relationship with the NIA changed. With the threats posed by Nemesis and then the impending Exogenous invasion, I felt I had no choice but to throw in with the NIA against those common enemies. And, much as it pains me to say it, I became something of an NIA spokesman, a point person who coordinated their efforts and those of you Ingress Agents around the world towards the goal of completing the Tessellation. Well, as most of you know, in the end, those efforts were successful, and both the threats of Nemesis and the Exogenous were quelled.

But, despite all the strides that we have made, the existence of XM is still the world’s worst-kept secret. Secret government organizations and corporate interests continue to be the only ones in a position to exploit XM, while the wool is continually pulled over the eyes of the people at large. And in light of this, now that Nemesis and the Exogenous are gone, my conscience dictates that I distance myself from the NIA once more - at least until such time as they see fit to lift the veil of secrecy around Exotic Matter research.

So, with that in mind… let me share with you this transcript I got ahold of, a speech made by Ezekiel Calvin last week, on the day he resumed his position as director of the NIA. Now, the fact that they would reinstall Calvin into the top spot is not at all surprising. But what is interesting is some of the new details he tells us about the NIA’s newest XM construct, the Battle Beacon. And, look, everything they said about what it means now to capture a Portal in a post-Exogenous world… that’s all well and good. But, the Ingress Scanner, and related Exotic Matter tech like these Battle Beacons, they don’t come cheap. The NIA is funded by a nigh-bottomless black budget, and the government doesn’t spend that kind of money if there isn’t something in it for them. So, that, today, is the question I pose to you, Truthseekers: What do we think the NIA stands to gain from the proliferation of the Battle Beacons? If we read between the lines, how does this new feature of the Scanner help them?

As, always, Truthseekers, I look forward to your thoughts in the comments. Stay safe, and keep me updated. 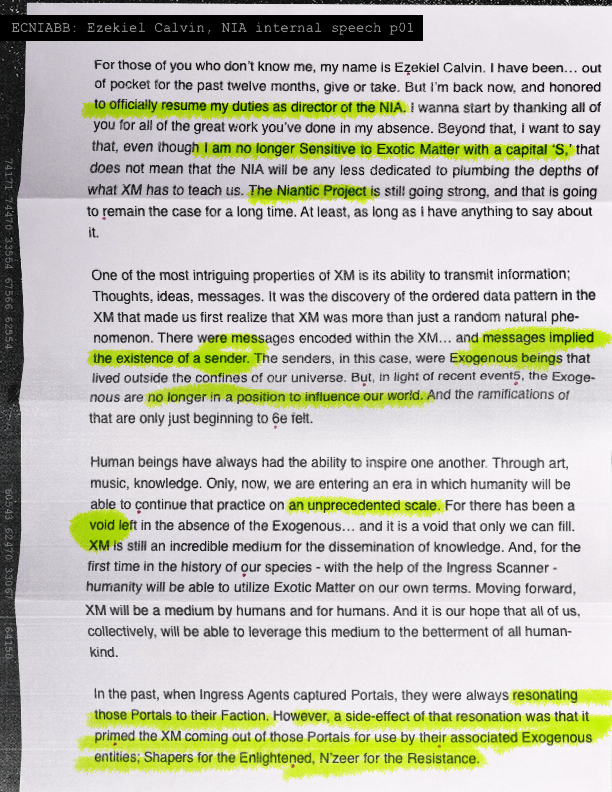 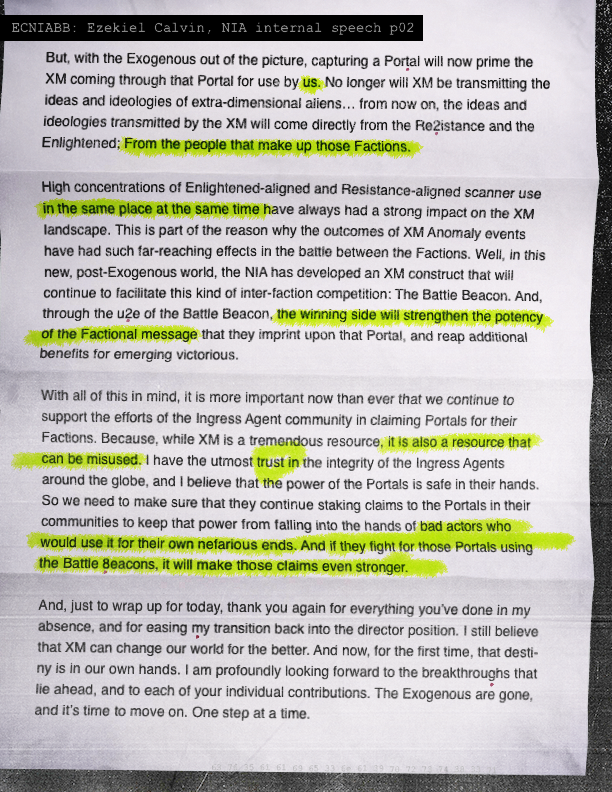