“Hey, Leo, you wanna finally get that Onyx Illuminator badge?”

This question, posed to our local Quarantine Online Trivia Host, Sojourner of over 5 years, founder of our badge brag group, damn near Onyx recon (RECON!), and yet still lacking those 4 Million glorious green MUs, led to Enlightened of New Hampshire Operation: NOT TRIVIAL.

NOT TRIVIAL was a plan to drop 17 layers of goodness, while not-so-coincidentally blasting a hole through a gigantic (factionless) blob of blue. 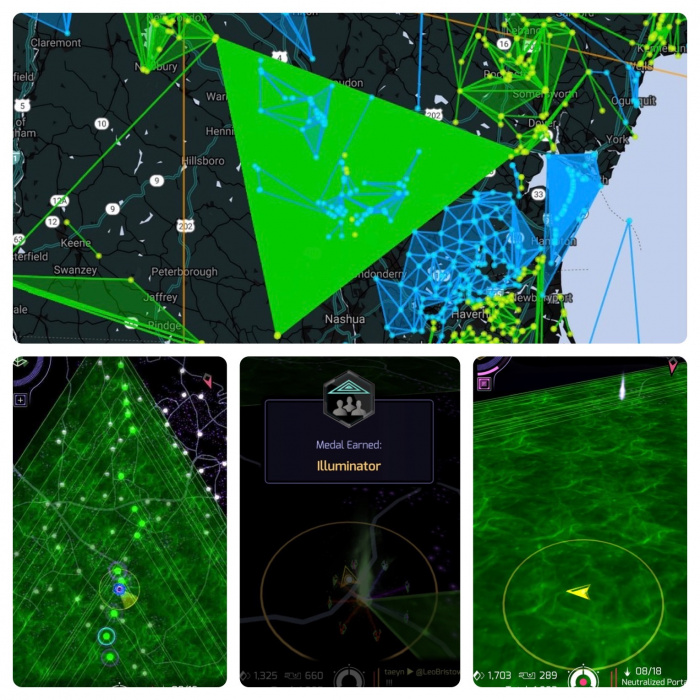 The challenge?  The person behind that enormous blob has a penchant for being able to materialize resources 50+ miles distant from their usual haunts in the blob to wreck portals and throw blockers, sometimes even of the more difficult friendly green color.

Such circumstances would not allow for a protracted clearing operation. Time was critical, and thus called for a coordinated team effort and an operational plan to instantaneously and simultaneously clear all the lanes while throwing the fields. This meant calling up the reserves of semi-active and retired players from around the region for some good old-fashioned shenanigans.

Plans were drawn and redrawn. Keys were farmed and shuttled. Targets were scouted for accessibility and signal quality. Op day arrived, and agents moved into position. Weather was rolling through and monitored closely for those agents needing to hike to their targets.  Extra agents were called up on op day because of a rather suspicious friendly blocker, and out of the selfish hope that maybe some fresh-baked cookies might show up. Shiny baubles were dangled to distract evil, naughty entities within the game.

At 5:00 PM, we were ahead of schedule, with all agents on station and amped to begin fielding.

“Looks like we are all ready - Leo, are you moving to the anchor?”

While the rest of the op team waited patiently, Leo scrambled through the woods to the anchor site, being soaked by the last of heavy rain which had blown throw the area on this summer afternoon. Forgetting that he was carrying an umbrella.

“All agents in position.  Leo, are you ready to start?”

Evidently pouring rain makes a man need to, you know, make water. Best to take care of that, that should only take a minute, right?

“Uh, yeah, just getting the keys ready, one more minute.”

These extra minutes, pushing on half an hour, are nerve wracking for an op plan based on speed of action.  Any late random derp link would almost certainly cost us checkpoint, and could scuttle the entire op.

Finally, at about 5:40 PM, NOT TRIVIAL was full go, and all hell broke loose in just a single game minute. Multiple blockers wrecked, 2 anchors deployed, the first field went up in seconds and the Art Park team set off to deploy the spine in both directions, layering outwards and under the first field at the same time. In moments, the blob was cut and once again the roads of south-central New Hampshire disappeared under a deep, delicious blanket of Enlightened green. 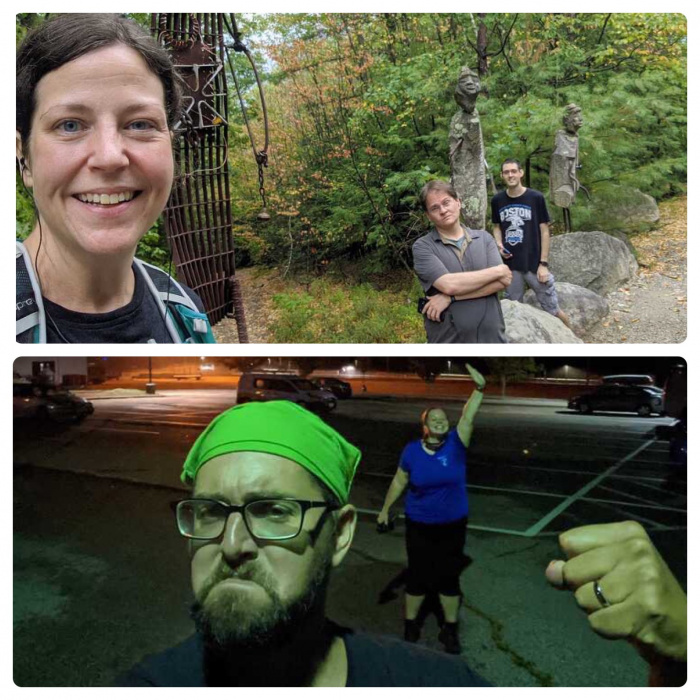 After checkpoint, Massachusetts Resistance were able to scramble agent @giggles692 for the takedown and impromptu xfac meetup.  This unpleasantly chipper arrival prevented one extra unplanned layer that would have earned Leo his second Onyx Illuminator, ending just 50k shy of that mark.

NOT TRIVIAL Summary: 33 total fields, approximately 7M total MU, 250km2 and two of the state's largest cities completely blanketed in deep, frothy green. The full 17 layer field set made checkpoint for score in Cell AM-MIKE-01 and landed the top two agents for the cycle, with 16 extra layers then thrown just for fun. Agents earned a new Onyx Illuminator (nearly 2!), a Platinum Illuminator, and harvested oh so many salty tears.