MrVerse ✭✭✭
July 2020 in The Investigation

Dear fellow truthseekers with the release of Requiem tesserae and Lexicon Tesserae, I would like to try to visualize the connections between nemesis, color spectrum, and archetype avatar. I hope this may help all of truthseekers to get a better understanding about Nemesis.

It is necessary to recall an old memory which was mentioned in Yuri Nagassa / Oliver Lynton-Wolfe Transmission . At 24:29 , Yuri shows this following image : 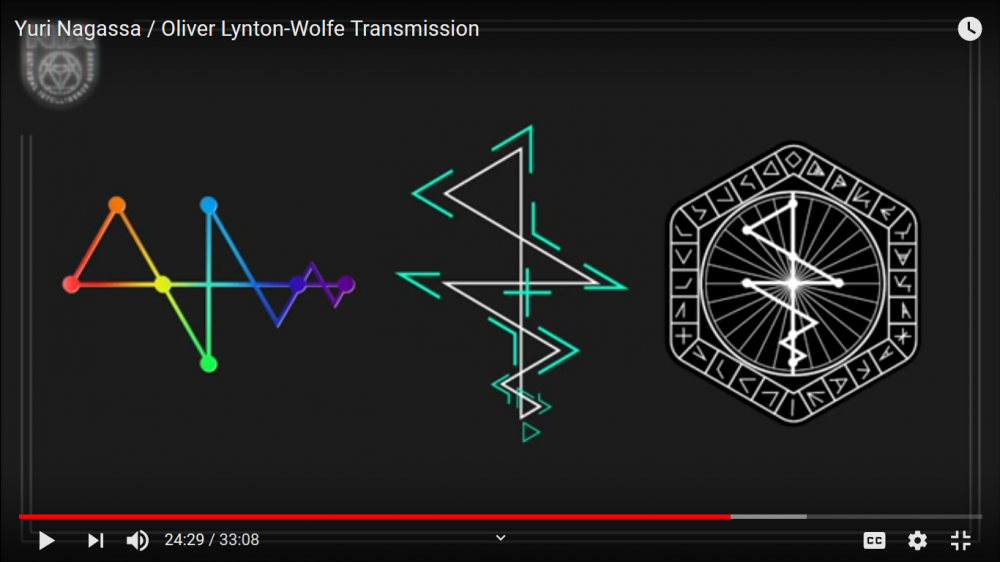 As it was mentioned by Yuri Nagassa, her theory was, there are 7 core member of Nemesis, represented by 7 visual color. 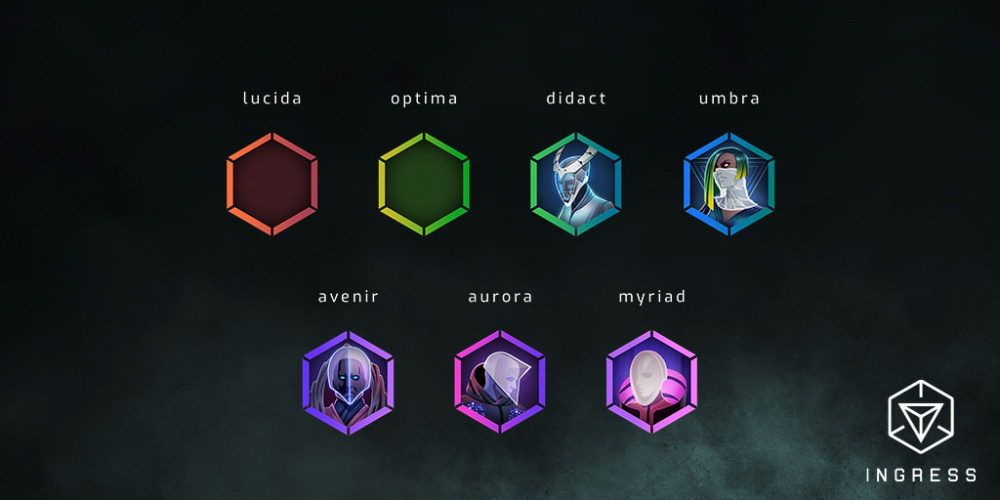 This picture was released at the beginning of Didact field Challenge (https://community.ingress.com/en/discussion/9174/didact-field-challenge-feb-14-24-2020).

I proposed several foundations related to analysis in Nemesis Identities and their respectable colors :

Considering the above pictures, the proposed foundation, and dropped tesserae, I tried to match each members of Nemesis into Figure 1. Here is the Result : 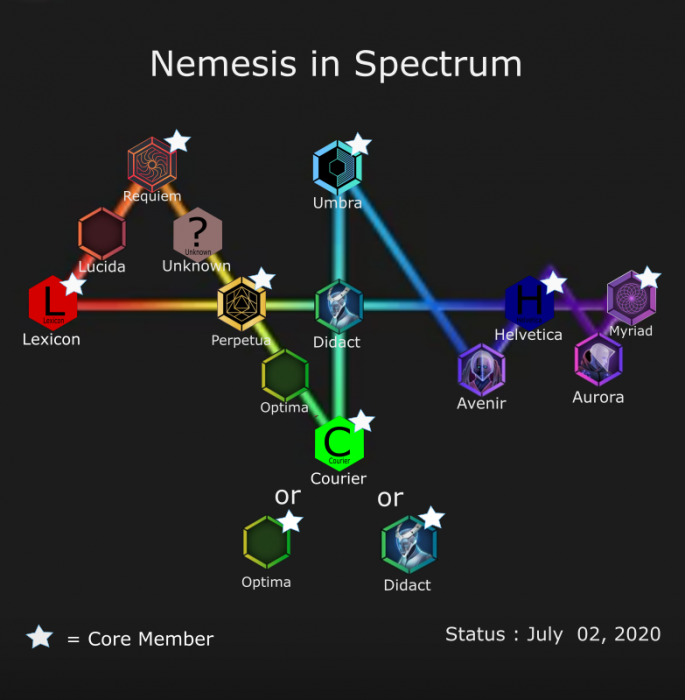 I added 4 dummy medals for symbol in the visualization as follows :

I will try to explain it one by one :

A. The Core Member

The first nemesis faced by agents. The purple color can be seen in myriad transmissions and both myriad unique hack and myriad anomaly.

I deduce it is Helvetica for several reasons :

(2)Blue is one of two color in hexathlon medal.

(3) Helvetica identity is revealed as Martin Schubert in Helvetica Unmasked Transmission . Interestingly, Schubert archetype is Skeptic and in the scanner it is a solid blue as seen in figure 3.

It is not difficult to notice that Umbra representing Cyan color, reflected in Umbra Anomaly and Umbra Deploy Challenge medal.

There are several possibilities of green color :

(3). Optima. One color identified in optima medal and transmission is green.

I put Courier in the first probability for these reasons :

(1) I have no information about the unknown member yet

(2) Didact has 2 colors in the medal of didact field challenge : green and cyan. Initially, I thouth Didact representing green colors as it is shown in the medal and alchemist scanner archetype avatar. But, the 2 spectrum color in didact field challenge medal (green and cyan) really bothers me. In the other side, Didact has more than one spectrum color in Didact Ultimatum Transmission.

(3) Comparable to Didact, Optima has 2 colors in the teased medal of Optima challenge and Optima Ultimatum transmission : green and yellow.

Related archetype : The Explorer, The Alchemist, The Humanist, or The Omniscient.

2.Perpetua is Yuri Nagassa, The dreamer. The Archetype avatar in agent scanner is also yellow.

Optima may have yellow colors, but compared to Perpetua, Perpetua's yellow color is more significant.

Requiem, as it is shown by Requiem XM Anomaly medal and Requiem Agenda Transmission.

Related Major Battle : Requiem XM Anomaly. Originally scheduled at May 25, 2020, after Lexicon Hexathlon. It is also the last battle against Nemesis. It was postponed.

Lexicon, as it is shown In the Lexicon agenda and Lexicon departure transmission, lexicon is shown in reddish color .

Related Major Battle : The battle against Lexicon was scheduled at March 28, 2020, after Perpetua Hexathlon, before Requiem Anomaly. It was postponed.

Apparently, non core members are represented by color spectrums within lines connecting between two nodes of visible colors. The color representing them is a combination of spectrums between 2 visual colors connected by the line.

# 8. Line between Purple and blue : Aurora

# 9.Line between blue and cyan : Avenir

# 10.Line between cyan and green : Didact

Didact Field Challenge Medal has 2 colors : green and cyan. In the Didact Ultimatum Transmission we can see the both colors. We also know that Didact identity is Dr. Oliver Wynton Wolfe, the alchemist whose archectype avatar in scanner is green .

Courier also has probability here, since in Courier ultimatum Transmission, Courier is surrounded by green color.

#11. Line between Green and yellow : Optima

It is shown in leaked optima challenge medal and the transmissions of Optima Ultimatum in which Optima is shown between yellow and green, especially in 0:25-0:26 and 0:38-0:40.

The information about this member is limited. Maybe this member will be revealed sooner or later.

Related archetype : The Explorer or The Omniscient

It is shown in leaked Lucida challenge medal and the transmissions of Lucida Ultimatum and Lucida Departure in which Lucida is shown between orange and red.

1. I prefer to address this visualization as documentation rather than prediction or theory. Before the revelation of all nemesis sequences, the data is incomplete. Everything are shrouded in mystery. So, this is not a conclusion yet, only a documentation and a tool for analysis.

2. There is a probability I made mistakes while identifying the colors in medals and transmissions. Several colors are very difficult to differentiate. I am self aware that I am not a color expert.

3. Even though in all unmasked transmissions nemesis identities are revealed to be researchers from both 1218 and Osiris universe, it is still debatable whether it is the real researchers, their doppleganger, simulacra, animated real body or even clone. We will know sooner or later.

4. I’m sorry for my limited english, I will try to clarify if there is something in my writing that may lead to confusion or ambiguity.

I would like to express my appreciation for all truthseekers who may correct the error in my analysis and who may add valuable information. I also hope that my analysis and visualization may help you as a tool to a better understanding about Nemesis in the Tesselation. Thank you