@Perringaiden I haven't seen many real humans doing scans around here either, lol.

Also that would require another human to verify the scan. Have fun with that :D

Has Amazon and eBay stopped sell accounts yet? That would be a start?

2FA isn't really what we're going for though.

Geographical verification requires some sort of 'true positioning' which is almost impossible if you can't trust the GPS. Photos taken through a secure means are one of the few relatively useful sources.

Re: Substitution of GPS and a very strong pest

The problem remains actual in our region for years. You can see my previous posts https://community.ingress.com/en/discussion/13393/another-spoofing-incident-in-korolev , they led to the fast ban of spoofing accounts, but it looks like the accounts of operator and the ones supplying spoofers with items are apparently not punished.

Been struggling with a spoofer in our area for several weeks now. Reports have done nothing, working with the vanguard hasn’t got us anywhere (not that they aren’t trying) and the agent still roams free.

I think the biggest frustration with this all is like everything else related to Niantic, lack of any sort of communication. Just throw mud at walls until something sticks, if it ever does. This feels more like a game against the spoofers than whatever you should be doing with the game itself. Me, personally, I have no interest spending my summer hoping Niantic will figure this out.

Re: Meet the XM Ambassadors!

From other chats, there are multiple agents who were selected that aren't active or haven't been for months in the actual game. Saw it in an xfac chat as well as a faction chat. One even looks kinda like a backpack account based on their AP/Badges.

But I'm sure that Niantic did as much vetting for the XM Ambassadors as they do when the check spoofing reports. So based on that, everyone in chosen should be golden!

I personally would enjoy seeing a badge like this added. I already drive hours as is to take down links and cast BAFs over nearby cities, rewarding the opposing faction agent whom went out of their way to take down said BAFs to open the play area back up for their own faction members only makes sense to me. There are also some quite complex large scale multi-layered fields from both factions with well placed anchor points that have been up for months now among the four different cells I play in, yet I am not really incentivized myself currently to take down the opposing faction's multi-field(s) (or go rogue and flip an anchor of my own faction) given it does not directly interfere with my own fielding plans currently and the AP I could generate going out of my way to take it down could more easily be generated in my local city by capping, linking, and micro-fielding a handful of portals.

Sure technically there is already an incentive to take down non-obstructive fields, and that is to help decrease the opposing faction's influence on the Local and Global scoreboard, as well as to make way for state or multi-state wide links and fields, but honestly I do not care much for the Global/Local scoreboard as there is no agent specific incentive there either other than to have your agent name listed among the top 3 scorers (bragging rights), and large scale ops are a bit rare where I live but even then the path of least resistance (less links/fields to take down) is usually chosen.

Another badge I may suggest to further incentivize the creation and destruction of BAFs which could strike parity with OP's badge suggestion, and to reward agents acquiring a top three leader board position among their cell(s), would be a multi-tier badge handed out to those agents that have achieved a position on the leader board multiple times. This would be counted with every new checkpoint their name is listed as top three scorers among their cell.

Essentially, a player can strive toward three big badges at once then.

I think a combination of OP's and my badge suggestions would help create and incentivize even more BAF ops among both the teamed up agents and the sole agents leading to an even more diverse and wonderfully chaotic battlefield.

I don't believe I ever saw a pop up for the two most recent news items here (without timestamps, it's difficult to know when they were added to the feed, but they appear to be newer than a post about March IFS): 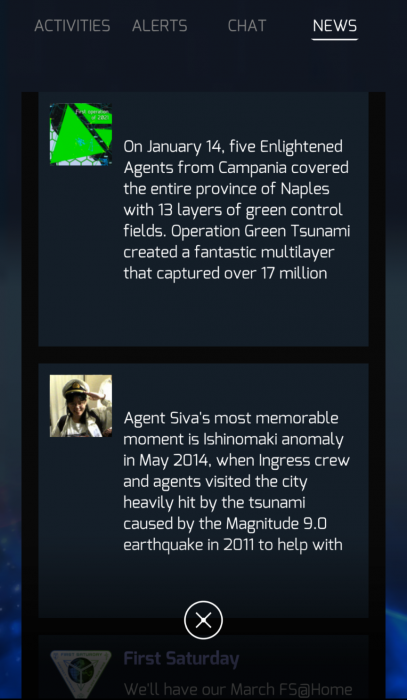 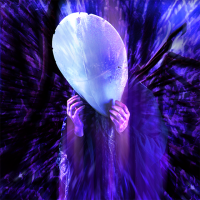 Re: Meet the XM Ambassadors!

I know of a few players who would have made good candidates but when asked about it in regional chats said, "No, I'm not very active in the forums."

I guess the job involves other things than we were expecting. It should be interesting to see how it develops! I heartily congratulate the new XM Ambassadors, and hope that they are able to live up to their roles and increase community engagement.